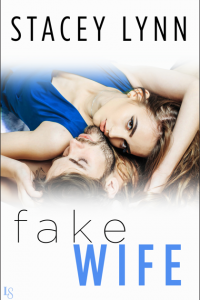 This marriage is strictly business . . . until the temptation gets way too real.

Corbin: I loved my grandma, but I don’t need her money. All I care about is keeping the house—the only place that’s ever felt like home. That, and screwing over my dad, who wants to turn the property into a mall. There’s only one catch: To receive my inheritance, I have to get married within six months. Me, the guy who’s never dated a girl for more than six minutes. Now I need to find a woman I can trust. So when I’m rear-ended by a Prius, I figure it’s a sign that I’m supposed to meet gorgeous, down-to-earth Teagan Monroe.

Teagan: First I lose my job. Then I come home and find out—in the most graphic way possible . . . yeah, that way—that my boyfriend is a cheating jerk. And then I speed off and nearly kill Portland’s sexiest bachelor. Sterling Lane should be pissed. Instead, he offers me more money than I’ve ever seen in my life to marry him and live together in a mansion for two years. No sex. No feelings. Just cash—enough to make all my dreams come true. Then we go and break all our rules . . . and I realize I’m falling in love with my fake fiancé.

Why do I read? To entertain myself I guess, to escape my busy life and bury myself in a fairytale (not that my life isn’t, but you know what I mean). A friend recommended Fake Wife to me, and after reading the blurb I had to read it. Fake Wife is sweet and entertaining; I love Corbin, Teagan and their story.

“This is fake, and it’ll only work if we can pretend to be in love, but none of it, nothing in my life for the next two years will be real. I have to remember that.”

Corbin seems to be your typical playboy from a rich family. He can buy everything he wants, women throw themselves at him. But lately it just doesn’t feel right anymore, the women are all boring and the same, and his relationship with his father is pretty much toxic. The death of his beloved grandmother shakes up his world; to inherit her beautiful house, he has to marry. Marry within six months while he doesn’t date longer then six days. Meeting a damsel in distress in the form of Teagan makes the whole marriage trap seem a lot more appealing.

Teagan has the worst luck in the world. On the same day she loses her job, becomes homeless and finds her boyfriend in a compromising situation. She knew they weren’t like they used to be, but after giving him everything, she never thought he would do this. Running into Corbin changes her luck. Not that she wants to ‘take advantage’ of a rich guy in need of a fake wife, but it will give her the opportunity to work on herself. Being friends with Corbin is doable, but falling in love with the man was not part of the plan.

“This woman. I can’t think of a single thing wrong with her. Every moment she turns that smile at me, I want to do everything I possibly can to keep it on her beautiful face.”

Fake Wife is the first book by Stacey Lynn I’ve read in a long time. It’s a well-written, easy flowing story from a double POV. Teagan and Corbin are two very likeable characters, who are attracted to each other the moment they meet. Of course, with the whole ‘fake wife’ deal they try to fight their feelings, but they fail miserably (of course). Besides the main couple there are a few other people I would like to know more about, and there is a good, old fashion villain, I like it.

As already said, Fake Wife is a sweet and entertaining story. Of course, there’s a wee bit of drama, but Corbin and Teagan falling in love is a given fact. It´s fun to see how fast Mr. anti/commitment starts to fall for Teagan, he´s not familiar with the feelings and it confuses him. Teagan is a sweetheart who deserves a good guy after her last relationship, and she sees past the image Corbin has created for himself.

My only ‘problem’ with the story is that of all women he could have run into, Corbin runs into Teagan, the one woman who was immune to his wealth. It was a bit too much, too predictable. But I have to be honest, the writing and Teagan and Corbin make up for it, I love this adorable story.

“All I have is yours. Everything.” He pulls back, our lips brushing against each other’s, and I’m helpless to stop it. Stop him. Stop everything I’m feeling for him. “I love you.”