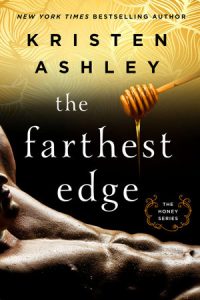 Step into the Honey Club, where every sensual boundary will be tested in search of the ultimate pleasure…

Branch doesn’t exist. Living off the grid, he’s looking for a way to forget his past and the guilt that plagues him. But no woman has ever been able to bring him to the edge he craves.

After a traumatic experience of her own, Evangeline stepped away from the decadent world of the Honey Club. But when she gets Branch’s offer—to play without boundaries or commitments—it’s too tempting for her to refuse.

As their passion ignites, Evangeline and Branch push each other to their farthest limit, fulfilling their darkest desires while falling harder and deeper than they ever imagined.

Alpha males being submissive… I always thought that was a no-no combination, but I loved Kristen Ashley’s The Deep End. And yes, Alpha males can be submissive. The Farthest Edge is the second book in ‘the Honey Series’ and tells the story of Evangeline – one of the club’s Dommes – and Branch. I love their hot and sensual, but also sweet and typical KA story.

“She’d never had an issue with being that girl. It was just who she was. But that wasn’t the girl she was going to be anymore.”

For as long as she can remember Evangeline had a thing for BDSM. She just went with her feelings, learned from experienced Mistresses and became part of the scene. Playing with different subs isn’t her thing, Evangeline wants to share her world with her lover, her life-partner. Not just the dominance and submissive, but also the day-to-day life like a regular couple. She thought she’d found that, until all went down in a horrible incident. Branch is a man with a harsh past who’s literally living on the edge. He’s an Alpha man through and through, but needs the pain and submission. He isn’t looking for a woman, but he can’t say no to the fiery Domme.

Evangeline and Branch aren’t looking for anything; she is not ready to get back to the scene and he thinks he can do with imitations of the real deal. A mutual acquaintance thinks differently and pushes the two together. Branch immediately turns Evangeline down, but she sees right through him. After some dancing around the couple settles into a strictly Dom/Sub deal, but this… is a KA story. There are some tense and head-shaking moments, but Branch and Evangeline just work. They have very hot moments that are of the charts, but also very sweet moments. I love the two of them together.

“She loved every second. When their mouths broke, she didn’t make more avowals of love. Branch wasn’t that way. They had it. They knew it. They didn’t need to go over it. They just needed to be easy.”

Branch and Evangeline are two very different persons, but somehow, they have that special click. Of course, it’s only physical at first, but feelings do get involved. I struggled a bit with the distance and formality of the leading lady of the previous Honey book, but I love Evangeline. She’s a real sweet KA heroine, but with a much kinkier side. Branch is Branch. He’s an Alpha guy with a darker twist. A friend pointed out he reminded her of Creed, and I fully agree. He has a total ‘Unfinished Hero’ feeling over him.

“Her Branch no longer surfed the edge. He lived the one they shared. And he loved it there. As did she.”

I love The Farthest Edge. I give the story of Evangeline and Branch 5 stars. 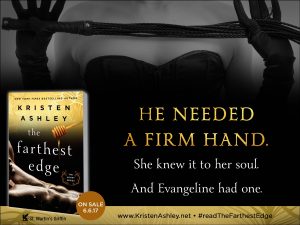 Putting a hand in and touching the fabric, Branch noted she had a fondness for silk and all of them were either dark purple, deep blue or black.

He also noted in an intense way that almost made him feel something, not only in his dick and balls, but somewhere else, that she had her shit tight.

She knew who she was. She knew what she liked. And what she liked wasn’t common or vulgar, as many people might see it (but he didn’t, he still couldn’t deny he like the way she obviously played it).

There was an elegance to her style.

It wasn’t about ball gags and he didn’t find a single strap on.

She got the life.

But she did it her way.

Yeah, that definitely almost made him feel something.

The next drawer down, he found more harnesses, these for smaller uses, balls, cock, jaw.

There were also two carved boxes he pulled out and opened, their original use was for rings or jewelry but she’d put four cock rings in the purple velvet in one and a number of gleaming nipple clamps with and without chains tangled against the blue silk lining in the other.

He put the boxes back, closed the drawer, straightened and took one last look around.

It was a well-equipped playroom. She could get creative and be clean and safe doing it.

He cast his eyes down to the top of the dresser, lifted his hand and swiped it along the top, shining his flashlight on his fingers when he was done.

She hadn’t been in there in months.

He drew breath in through his nose, switched off the light and turned his attention across the studio toward the wall beyond which was her house.

Aryas had made him an offer.

He needed to make a decision.