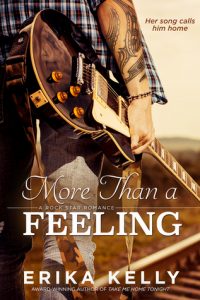 When Cooper Hood left Snowberry, Montana ten years ago, he swore he’d never go back to the town that painted him with the same brush as his addict mother. But right in the middle of his band’s national tour he gets a call to come home: his mom’s got a whopper of a secret to reveal.

Daisy Charbonneau’s in trouble. The talent she hired for her resort’s annual Huckleberry Festival’s just bailed on her, and she’s desperate to find a replacement act. Luck turns her way when she discovers her high school crush is back in town—and he happens to be a rock star.

As they work together, a crush deepens into so much more—but who falls in love in two weeks?

Especially when Cooper’s never coming back to town, and Daisy’s never going to leave it.

More Than a Feeling is the fourth book in ‘the Rock Star Romance Series’ by Erika Kelly, and tells the story of the remaining bachelor of Blue Fire, Cooper. Cooper and Daisy have been friends throughout high school, and this is the story how they become much more than just friends…

“My heart. My heart’s on the line. I’ve never given it to anybody before. Because it’s yours.”

Daisy is born and raised in Snowberry, and she loves her little town. She and her mother are close, but growing up with a father ‘suffering’ from wanderlust was hard. Yes, her dad loves her, but he always put his own interest first, not thinking about the woman who loved him and his daughter. As a result, Daisy is a bit afraid for intimacy; she’s scared people will leave her behind. Seeing her high school friend and secret crush Cooper confuses her, she still loves the guy, but she knows he won’t stay.

“She smiled at him, wanting to share the moment, but the look in his eyes—the longing—only reignited that damn spark. She pulled her hand back. She had to stop touching him.”

Growing up as the son of the town druggie/hooker has left its marks on Cooper. All he can remember from his childhood is the neglect his mother put him through, and how the people in town treated him. His friend Daisy was one of the few good things in his life, but he always thought she was too good for him, so he never made a move on her. Rock music got him out of Snowberry, and he never looked back. When he gets a message from his mother and returns for the first time in a decade, of course Cooper rans into Daisy. And this time, he can’t stay away.

“When she reached him, she looked radiant, expectant. And he knew she wanted him to hug her. She seemed to hold herself back, waiting for him to make the move. And if he were a different kind of man he would.”

Through the high school’s music program Daisy and Cooper became friends. They both loved music and Daisy saw Cooper for what he really was; a sweet guy who was so much more than what he believed himself. But while hooking up with other girls in school, Cooper kept Daisy in the friendzone, believing he didn’t deserve a girl like her. Daisy and Cooper are both adults now and finally decide to give into the feelings they have had for each other for so long. They belong together, but before they have a shot at something real, both have to deal with their past.

Both Daisy and Cooper have been hurt growing up. Daisy by her father who never kept the promises he made, and Cooper by the actions and disinterest of his mother. More Than a Feeling tells the story of Cooper and Daisy becoming a couple, but also how they come to terms with their past. Especially Cooper is in for the ‘surprise’ of a lifetime, learning his childhood could have been so much different is a hard message to swallow. I love Daisy and Cooper, but sometimes I wanted to shake some sense into Cooper. Come on, you are a well-known Rockstar, you have good friends who are like family; of course you ‘deserve’ Daisy…

“I want to kiss your heart and make the pain go away. I want to crack you open and let all the ugly fly out and then close you back up with my mouth, kissing you until you’re healed and whole.”

I’ve enjoyed reading More Than a Feeling, I give Daisy, Cooper and their story 4 stars. 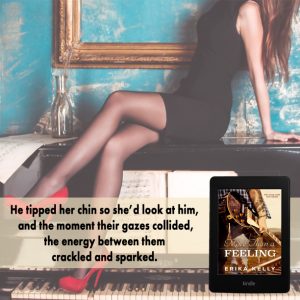 Closing her eyes, Daisy bit into the crunchy drizzle, her teeth sinking through the buttery rich goodness of the bread. Oh, dear God. Her mom made the world’s best cinnamon rolls. With a sigh, she looked up to find someone heading toward her on the path.

Of course her childhood crush would show up the moment she’d stuffed her mouth full of pastry. Leaning against the hood of her car, Daisy chewed quickly—which sucked because, basically, time should stand still while savoring her mom’s desserts.

But Cooper wasn’t looking at her. Scowling at his phone, he stopped on the path, fingers furiously typing. Was he dealing with his mom?

Or maybe a girlfriend. Instantly her skin tightened, and her heart thudded. If Cooper had a girlfriend…God. Last night she’d gone on and on about how much he’d meant to her.

She looked away, mortification crashing through her system.

First, she’d bumped into him wearing waders and a fishing hat, and then she’d forced him to go out with her. Awesome.

He couldn’t have been clearer that he didn’t want to spend the day with her, but she’d gone and made an offer she knew he couldn’t turn down. Not if he wanted to get his mom’s house built and get himself back on tour.

Feeling a little sick to her stomach, she licked the sticky drizzle off her fingers and shoved the treat back into the bag.

As he paused on the path, thumbs working over the phone’s keypad, she took in his powerful physique. A white T-shirt strained across broad shoulders, hugging his thickly rounded biceps, and worn blue jeans cupped his hard, muscular thighs.

The colorful ink covering his body made him look like a total badass. She’d noticed a strange symbol on his inner wrist and a cartoon image on his forearm of a pin-up girl holding a barbell, a sexy slash of red for her lips.

The man he’d grown into made her soul wake up, and God, she couldn’t even remember the last time she’d felt this kind of fluttery attraction for a guy.

As if he felt someone watching him, he looked up sharply and found her. The worry lines eased. But he didn’t smile. “Hey.”

She pushed off her car. “You ready?” Forced or not, her plan was good for both of them. She was sticking to it.

One Response to “Book review + excerpt: More Than a Feeling ~ Erika Kelly”