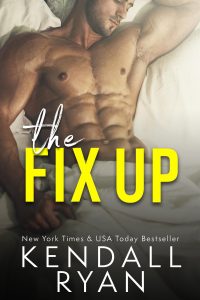 My tempting and very alpha friend Sterling Quinn is someone I consider off-limits.

It's not just that we're friends, he's also cocky, confident, and British, which means he's a walking aphrodisiac.

But lately he's been giving me the look. You know the one. When he thinks I'm not paying attention, and his gaze lingers for too long.

When we start working together, that's when the sexual tension between us gets so thick, I want to hack through it with a machete. I want to make all these deep feelings I've harbored for him disappear, because there's no way this can end well.

The lines between business and pleasure become irrevocably blurred, and I'm stuck between a rock and Sterling's very, very hard place.

Rather than keep a level head about our growing attraction, Sterling wants to go all in, showing me just how explosive we can be together.

But I've been around long enough to know that this British bad boy is more than my heart can handle. I'm not about to be cast aside like yesterday's underwear when he's done having fun.

Sterling’s never been told no, and he's not about to put his ego aside and play by my rules. But I never thought he'd fight so dirty.

A couple of months ago I’ve read the Hitched series by Kendall Ryan, and although they are over-the-top, the books are very funny. Noah and Olivia – the leading couple in Hitched – have the support of their best friends, who provide them with well-meant suggestions. To their disbelieve, said best friends suddenly find themselves in a strangely familiar situation. This is Sterling and Camryn’s story.

“I feel a bit like the guy on The Bachelor. But there are no roses to give out, and this is my life, not some goddamn reality-TV program.”

Sterling is your typical rich playboy / jaded divorce attorney. He doesn’t believe in love, but enjoys all what comes with being rich, British and attractive. Sterling spends a lot of time with beautiful women, but they all know the score; nothing serious. When an unexpected inheritance with an unusual clause lands in his arms, Sterling suddenly has to think about the more serious things in life. Luckily, he gets help from Camryn, the best friend of his best friend’s wife. And quickly Camryn is all Sterling can think about.

“You are crude,” she says with a chuckle. “Hey, you brought it up. But yes, love, I like pussy.” Her cheeks flush, and I give zero fucks about making her blush. There’s something in me that likes getting a rise out of her. In fact, I’d love to rile her up even more.”

Camryn is a hard working PR executive and very good at what she does. After her last boyfriend disappeared from her life leaving her with a debt to pay off, Camryn stayed away from men. For a while now she’s starting to see Sterling, the best friend of her best friend’s husband, in a new light. Yes, she is attracted to him, but she also sees him with other women and knows she’s not like them. When she and Sterling have to work closely together due to his sudden inheritance, Camryn tries to fight her feelings (but fails of course).

“Morning, sunshine.” I grin at him. Fighting the urge to look away from those sexy dark-blue eyes, I hold his gaze, not wanting to let him know how very much his presence rattles me.”

Sterling and Camryn are a sweet couple with lots of (sexy) chemistry, but they each have their reasons to fight their feelings. Sterling believes Camryn is only interested in happily-ever-afters (his jaded view of the world tells him that’s impossible) and Camryn tries to keep their relationship professional. It doesn’t take long for Sterling to realize Camryn is the woman he wants to change for, that she is the one for him. Trying to convince a stubborn Camryn of this fact is a lot of work for Sterling, but he doesn’t mind at all.

Like ‘the Hitched series’, The Fix Up is a sweet and easy read. The inheritance plot is a bit farfetched and over-the-top, but since this is a romantic comedy I absolutely don’t mind. I love Sterling and Camryn, I like their banter and how Camryn ‘tries’ to fight Sterling. It was good to see Noah and Olivia from Hitched again, to see their relation is as strong as ever and that they’re still madly in love. There is a tiny bit of angst in the book, but luckily it didn’t last very long.

“I want you as my wife.” His fingertips dance over my skin so lightly, they burn. “I want to wake up next to you every day and make love to you every night. I want to take you to Italy and put little babies in your belly. I want to grow old with you, Cami.”

I’ve enjoyed reading The Fix Up, I give the story of Camryn and Sterling 4 stars. 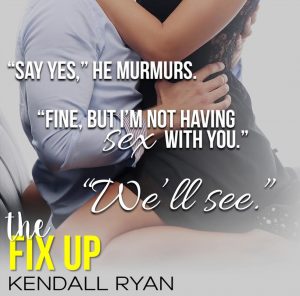