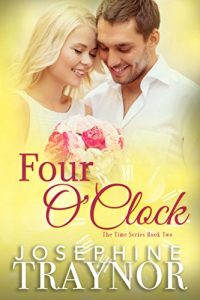 Charlotte and Chris were happy to play matchmaker for Ava and Patrick - they didn’t expect to find love themselves.

Charlotte
I’m the kinda girl that’s looking for one night and not anything after that. I refuse to date. I’ve been down that road before and it ended in heartache. For now, I’ll focus on my designs, my business and me. That’s what I told myself until tall, dark and dimpled walked into my shop and everything changed.

Chris
I’m the kinda guy that girls only want for the night and even then, I make sure there’s no invitation for breakfast. Broke, living with my brother’s place while working in his kitchen - I’m not exactly boyfriend material.

Commitaphobes Charlotte and Chris have never felt understood. These two have so much in common, it feels like they have found the other half to themselves. Shying from relationships, they move into the unknown territory of being … daters.

A few months back I read A Quarter to Twelve, my first book by author Josephine Traynor. I love the main characters and their story, but their sidekicks (her best friend and his younger brother) where just as funny. I wanted to know more about them, and with Four O’Clock I do. I real like Chris and Charlotte’s sweet story.

“When you find the one, you just know. They want you to be a better person. They push you to face your fears. You have done that.”

Charlotte comes from a rich family and has lived a privileged life growing up. However, it doesn’t make her happy. She wants to be her own woman, and make her own career doing something she loves. Sadly, her snobby parents think differently and want nothing more for their daughter to give up her dream. Charlotte’s love life is a bit depressing. After she got burned badly she sticks to one-night-stands, no emotions and certainly no commitments. Helping her bestie Ava to find love in the form of Patrick is a good thing, but she didn’t count on his brother Chris.

“Charlotte’s staring at me with her big blue eyes. Her mouth opens and then closes before opening again. “I don’t want you to leave, that’s part of the problem.”

Chris is not very proud of himself. He’s broke, he lives with his older brother Patrick and doesn’t know what to do with his life. Yes, he works in Patrick’s restaurant, but his passion lays somewhere else. He’s not sure how to tell Patrick about his plans. Besides his older brother, Patrick is also his parent-figure since their parents died years ago. And he disappointed him a bit over the years. Chris is an attractive guy, but for some reason women see him only as one-night-stand material. This hurts of course, but meeting Charlotte while getting Patrick back in the game feels different.

“You seem like the kind of girl I don’t want to rush.” Blinking is the only response I get as she mulls over my words. “Believe me, I want to go there with you, but, and this is going to sound stupid, I don’t want to have a quick fuck.”

Charlotte and Chris are both total commitment-phobes. Yes, they go out of their way to make Patrick and Ava happy, but they don’t see it happen for themselves. They do have chemistry, and working in Charlotte’s store and spending time together might not be a very wise idea. But they do, and soon they can’t fight their feelings any longer. For being so not looking for a relationship they do pretty well, and I love the two of them together, they just match.

Since I’ve read A Quarter to Twelve, a lot of the situations in Four O’Clock seem familiar. However, they’re now told through the eyes of Charlotte and Chris, giving their thoughts about Ava and Patrick, as well as their own story. Normally I’m not a big fan of ‘retelling’ a story from a different POV, but since this is about another couple I was curious for, I don’t mind at all. Four O’Clock is a sweet story with some serious parts, but overall it’s a funny and romantic.

“If it weren’t for you, I would have just kept on dreaming about the life I know I can have with you.” “Then let’s start leading the lives we’ve dreamed of.”

Chris, Charlotte and their story didn’t disappoint me at all, I give Four O’Clock 4 stars.