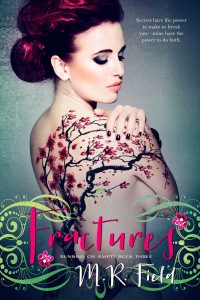 If love were a battleground, then we waged a war upon it.

We’d been best friends for years, and then we were wayward lovers. It was meant to just be an itch to scratch—some harmless fun. But once he had me under his thumb, tied in his binds, he became my undoing.
These days, he consumes my thoughts. I’m powerless under his touch.
He makes me ignore the guilt from my past that consumes me when I don’t deserve to forget. With him, I am raw and exposed, yet he continues to move closer to me.
He’s willing to fight, but my armour has been dented enough.

After being lied to by my own family, I know the power of deception. Now, I’m afraid that withholding the truth will be my ruin.
Especially when all my secrets are attached to her.
She is my muse. My salvation. The reason my past didn’t destroy me.
She makes me feel. She makes me want. She’s the gasoline to my fire.
All’s fair in love and war.
For us, it’s time to strike the match.


Last year a friend of mine recommended a new author to me; M.R. Field. I read her books Fragments and Splinters within a few days, and I loved both of them. I was happy to hear the author was working on a new book; Fractures. This book tells the story of Trinity and Theo – who we’ve met in the previous books – and their road to happiness.

“Back room,” he seethes. “No talking. I want you on your desk. Take off your skirt.” “Um, hello to you,” I say sarcastically, as I put my hand on my hip. “What has gotten into you?”

Trinity is a feisty, strong woman. She owns her own store where she designs, makes and sells wedding and formal dresses with an edge. Trinity is very good at what she does, so it’s not a surprise she has a waiting list and she doesn’t accept everybody as a client. For as long as she has known Theo, Trinity has had feelings for him. Feelings she didn’t understand at first, and now Trinity doesn’t think she deserves him. But staying away from Theo isn’t possible.

“I’d thought it was no strings. Did we even have that conversation all those months ago? Seems that my vagina made up its own mind. It wants more. But it isn’t just that; I want to hang out more like we used to. I’m drawn to him, and I wish I could stop it.”

Theo is a successful architect and he loves what he’s doing. His childhood hasn’t been easy, his mother died when he was young, leaving him behind with a cold and distant father. Trinity is a fixture in Theo’s life since his early teens, he has always had feelings for her but he doesn’t want to lose her and her friendship. So being just friends it is, until it isn’t working anymore.

“For the past few months, I’ve been chasing after my dream. A dream that has claws. A dream that holds silent tears. A dream that melts under my fingertips and against my binds. Trinity. The only woman I can love and hate in one breath.”

Since the day they met as young teens, Theo and Trinity have been friends, they understand each other and care deeply of the other. But both have their reasons to keep their relationship as ‘just friends’. When Fractures starts, the couple has already given into the pull that has been there for years, but it’s just physical; raw and explosive. Both Theo and Trinity must learn to accept events from their pasts, to be able to move forward. Not only for them as a couple, but also for them as individuals.

Fractures is a beautiful story about friends who deserve to be so much more than that. It’s very clear from the beginning Trinity and Theo belong together, all they have to do is let go of their pasts. But letting go of the past is hard; old wounds must be re-opened and truths have to be learned. Fractures is a heartwarming book; it’s a simple love story of two friends who can’t life without each other. There are no crazy ex-partners and over-the-top situations; this book doesn’t need it. Theo, Trinity and the beautiful writing of M.R. Field is enough.

“You are the map on my skin, and the journey that I want to take for the rest of my life.”

I love Fractures, I give the story of Theo and Trinity 5 stars. 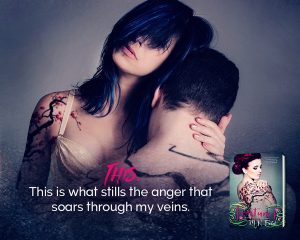 My precious.
No, step back.
You can’t touch it.

The amused clerk stares at me, stupefied.
“What?” I ask, clutching the plastic-covered goods. I’m only hugging a magazine. What’s wrong with that? Pressing my thumb and index finger together, I feel the thickness of the comic. Is it thicker, this edition? I glance down at the glossy contents, trying in vain to guess the page number. Does she finally see him?! Oh my God! He can’t be captured! My excitement flares until the clerk’s eyes clash with mine.
“Haven’t you worked out internet shopping yet? You can order it online and have it delivered to your front door, you know.” He hands me the receipt for my precious purchase, but I can’t move. His sheer stupidity has me frozen to the ground.
I stare at him. Right at him. Why was he discouraging customers from coming in?
Can I poke him on the forehead to check for any sign of life in there? Check that he isn’t a damn fool?
I snap out of my trance and snatch the receipt out of his villainous fingers.
“And you fucking work here,” I mutter in disgust. “The whole purpose of coming in here is to immerse myself in the vibe. The unity of like-minded people in one place. You clearly do not have the said vibe to be standing behind that desk.” I stand on my tiptoes and look over the desktop at him. “You’re not even dressed like you belong here. Where are your Docs? Where’s the metal in your face? Where’s the chain to your wallet? You’re wearing ordinary jeans … did you lose your way from the GAP?”
He leans forward and stares down at my outfit, paying significant attention to the cherry blossom tattoo that crawls over my shoulder. Stare at my boobs, buddy, and my shoe goes up your arse.
“Did a Smurf attach itself to your head?”
I touch my tongue to my labret and run a hand quickly through the loose ends of my bun, unweaving it to form a ponytail. “Well, there was a Smurf orgy, actually. They all got excited and left a mess.” His face stills as he stares at me. “Yeah, I know, I took it too far. But, you have to admit, you kinda don’t fit in here if you can’t take on the weirdos.” I chuckle as I bring the comic closer to me.
“I get off in fifteen if you want to hit a pub and yell at me some more.” He winks, leaning his elbows on the desk. “We can see how weird this conversation can really get.”
My chin flinches in surprise. He’s cute. I’ll give him that. He has short blond hair and blue eyes, but that familiar feeling of interest doesn’t come. No accelerated heartbeat, or pulse—nothing.
A year ago, I might’ve said yes, the quick thrill of want overriding anything else. The need to escape my clouded thoughts had been easily fixed with a cheap screw. So why not now? ’Cause I had a boyfriend? We weren’t even classified that.
I consider my response for a moment longer, not realising that I’ve kept him waiting until he clears his throat.
“So, I take it that’s a no, then?” He tilts his head, leaning closer to me, but I take a step back. His cuteness does not lure me in. He chuckles and winks. But, again, nothing. No twitching—nothing igniting between my legs. I honestly think my vagina is on a hiatus or holidaying in the Bahamas. All the while it sunbakes, waiting for Theo. We need to sort our shit out.
“Sorry. I’m not able to,” I say, clutching the mag to my chest. “But … um, thanks?”
“You’re asking a question?”
“It’s not every day you get a backhanded compliment after being accused of a Smurf invasion.”
He smiles and points to the magazine that I grip at my chest. “Off you go on your special adventure with that.” He gestures as the magazine crinkles slightly between my protective fingers. “Try to avoid any Smurfs on your way home.”
I release the magazine in one hand and point up towards my left. “I think once you’re up those stairs, the GAP is that way.”