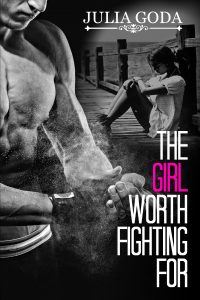 Bruises fade.
A cut can be bandaged,
A broken bone healed.
But can a wounded heart mend?

Deeply damaged by her father’s abandonment when she was thirteen years old, Rainey Miller has let the fear of getting hurt shape and trap her to the point she refuses to connect with people on a deeper level. She is popular and has friends, but her strict dating rules prevent anyone from the chance to touch her heart.

Up and coming boxer, Logan Danvers, has his eyes set on the raven-haired beauty with the cerulean eyes. No matter how hard she tries to push him away, he will push back even harder.
Until she gives in.
Until she is his.
Because once he sets his eyes on what he wants, he doesn’t give up.
It’s who he is.

But what will he do when he realizes it’s not who he is but what he is that could cost him his chance with Rainey? Will he give up or will he find a way to make her realize she is The Girl Worth Fighting For?

“He and I could never happen. I had a rule I lived by, a rule I wouldn’t break for anyone. I knew men like him, arrogant and self-righteous men who fucked everything up if things didn’t go their way—or even when they did. The risk was just too high.”

Rainey had the perfect childhood with a loving mother and father. Until it wasn’t perfect anymore; her dad lost himself to anger and alcohol, not being able to handle his defeat in the boxing ring. This has left Rainey emotional scarred, unable to truly connect with other people on an intimate level. Nowadays she works at a shelter, to make a difference in the lives of children, to make sure they have a chance at a better future. Rainey loves her job, and enjoys working with her co-workers and the children they look after. But lately Rainey is very distracted by a man, an annoying always present man she’s not allowed to like (per her own rules). But ignoring Logan isn’t an option.

Logan is a boxer, and a very good one. He has been doing it for a long time, and he loves to train other young kids in the art of boxing. Because Logan’s parents had a rocky marriage – his father was a cheater – his mother has taught him to respect women, and that’s what he does. He doesn’t play the field, and never dates multiple women at once. Logan also volunteers at a local shelter, helping with the youngsters who are facing rough times. And here he meets a woman he instantly falls for, Rainey. Too bad she doesn’t date boxers..

“He wanted her. And as he was standing across the room from her, unable to move his eyes away, frozen in time, he realized he was already in so much deeper than he had thought. For him, there was no turning back.”

The moment Logan lays his eyes on Rainey, he instinctively knows she’s the woman for him. Rainey is a different story. Yes, she’s attracted to the man, but the sport he practices is something she despises. Her dad’s betrayal still cuts deep, and she doesn’t want to get involved with a man who boxes, just like her father did. But Logan knows what he wants, and that is Rainey. Slowly he finds a way into her life and heart, Logan doesn’t give up and shows Rainey he’s nothing like her father. Rainey tries to fight Logan and the feelings she starts to develop for him, until she sees what’s in front of her. Together Rainey and Logan are a sweet couple with lots of chemistry and funny banter.

Like other books by Julia Goda, The Girl Worth Fighting For is written in an easy, clean style. No flowery phrases and overly deep inner thoughts, just the words and thoughts of normal, realistic people. Like other heroes by this author, Logan is an Alpha man, but he doesn’t take it too far. Yes, he pushes Rainey a bit, but he lets her make her own decisions, lets her come to her own conclusions. Rainey is a feisty, sweet woman who’s been through hell with her father, and still is dealing with the aftermath of his betrayal. I love to see Cole and Lizzy again (from the previous book in the series), to see their relationship is still going strong, and that Cole is still as over-the-top as ever.

I’ve enjoyed reading The Girl Worth Fighting For, I give the story of Logan and Rainey 4 stars. 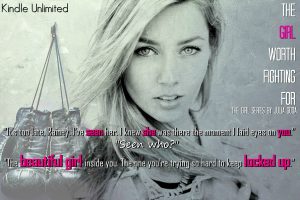