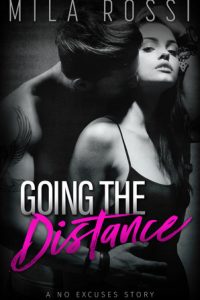 Once you slap the hell out of the light heavyweight champion of the world on the night of his first loss, how do you convince him to give you an interview? That’s the dilemma Samantha Wellington finds herself in after turning down the most desirable yet foul-mouthed athlete she’s come across. Unfortunately for her, her job depends on getting his interview and this boxer’s not talking.

When Trent “The Punisher” Page is humiliated by the spunky reporter, then cornered for an interview, he does what he does best: he plays dirty. He didn’t earn his nickname for being nice, after all. If the little minx wants to know more about him, she’ll have to pay with the one thing she’s not willing to give - herself.

Her elements of surprise meet their match in his determination to succeed. With vastly different motivations, can they break down the enemy without jeopardizing themselves?

Going the Distance is my first read by Mila Rossi and I’ve enjoyed reading it. It’s a short, easy readable book without over-the-top drama and crazy story lines. Just two people getting to know each other, falling in love.

“The Punisher. What kind of ridiculous nickname was that? And he’d sent his guys to get her. Not even talk to her, but get her, like she was an object to be picked up off the shelf. Ugh. What a jerk.”

Samantha is a young reporter working for a struggling newspaper. Sports aren’t her thing, but her boss talks her into interviewing a boxing champion who just lost his first fight ever. To her dismay the boxer is the same guy who made her a rude proposition while she was partying with her friends in Las Vegas.. Samantha doesn’t want to interview the man, but losing her job over it isn’t an option.

“What’s it going to take?” she asked, tying her hair back again. His mind came to a halt. “What?” “What do you want in exchange for an interview?” His lips curved into a dangerous smile. “All sorts of things.”

Trent ‘the Punisher’ is a famous boxer who – until very recently – has never lost a fight. After the death of his parents, Trent spent all his free time training and boxing, shaping him into the fighter he is today. A relationship isn’t in Trent’s future, but he enjoys the fun between the sheets when he feels like it. Being turned down by a pretty girl is a new thing for him, and when she later shows up for an interview.. Well, let’s say that creates possibilities.

To say Trent and Samantha’s first meeting doesn’t go well is an understatement. Sam just wants to party with her friends; Trent’s proposal angers her and ruins her mood. But since she’s ordered to interview him, Sam is forced to spend time with Trent. Trent doesn’t want to talk to a reporter – he never gives interviews – but he’s curious to see how far Sam will go to obtain his corporation. While spending time together, Sam sees there’s more to Trent then just his sports persona and she actually likes him. Trent does his best to see Sam as just another conquest, a one-time thing, but since this is a romantic story you know he’ll fail.

Going the Distance is my first read by Mila Rossi and I like it. Going the Distance is a relatively short story (124 pages) but is doesn’t feel like a short book. Trent and Samantha dance around each other in a realistic way and sound like real people. Yes, there aren’t much other characters in the book, but that doesn’t take away from the story. For a long time, Trent keeps seeing Sam as just a fling; his declaration of love felt a little sudden. If he had mentioned the possibility of love sooner it would have felt more real to me.

“How do you plan on celebrating?” “That depends.” “On what?” “On you.” She focused on the collar of his black T-shirt. “You want to celebrate with me?” “Babe, I wanna do everything with you.”

I like Going the Distance, I give it 3.5 stars.

Mila Rossi is a contemporary romance author who writes feel-good stories - no angst here. She creates heroines who don't back down, stand up for themselves and insist on freedom and independence until the right man comes along, then all rules are thrown out the window. The heroes must be clever, generous, and able to throw a girl over their shoulder.

Mila has seen the world and loves to write about it. She also loves to paint vintage anime characters, belly dance, try new foods, and perfect her archery skills. She wishes she could partake in extreme sports, but only allows her characters to tempt fate. Her own chances of causing disasters are just too high.

When not typing away furiously, she goofs around with her husband and daughter.