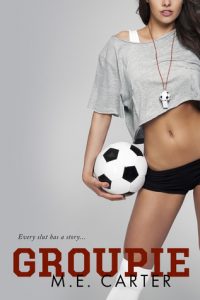 I received this book from Enticing Journey Book PR in exchange for an honest review. This does not affect my opinion of the book or the content of my review.

Groupie
/ˈɡro͞opē/
a person, especially a young woman, who regularly follows a celebrity in the hope of meeting or getting to know them.

Whore. Slut. Cleat Chaser. I’m used to the names so they don’t bother me. These are my boys. My friends. So what if I like to have dirty sex with them? My body is no one’s business but mine.

Why is Rowen Flanigan making me re-think how I live my life? Making me question my choices? He’s only a rookie.

rook·ie
/ˈro͝okē/
a member of an athletic team in his first full season in that sport.

Player. Son of a legend. Rookie.
Sure, I’d heard the stories of the groupies before. Who hasn’t? I’ve just been more sheltered than my teammates. So what? I didn’t expect her to be smart. Witty. Kind. She brings me to my knees in every way – except one.

That part? I’m saving until the time is right.

So how in the hell did I end up falling for a Groupie like Tiffany? And how in the hell is this going to work when everyone at my job has had a piece of the one thing I haven’t?

A couple of months ago I read my first book by M.E. Carter, Juked. I’m not a sports fan, but I really liked the story and its characters. One of the side characters was a team groupie, Tiffany. To my surprise I learned she would be the heroine of the next book, I didn’t like her at all. Groupie tells us her story, and to my surprise I’ve ended loving Tiffany, and her man Rowan.

Tiffany is a 22-year-old sports producer. She loves sports, and loves the job she that she has. Tiffany is a free woman, who isn’t shy about her sexuality and she enjoys having sex. Being a groupie/friend to the Texas Mutiny soccer team gives her what she needs; lots of hot sex with her friends, no strings attached. She doesn’t care if her boys are married or not; she doesn’t think of the consequences of their parties, it’s all fun. The moment Tiffany meets Rowan she knows he’s different. He treats her so very differently than his team mates, and slowly she begins to wonder if being a groupie is worth is all.

“I’ve never claimed to be anything other than what I am. I’m not here to snag a player as a husband. I’ve never striven to become a wife or girlfriend, or WAG as they’re more commonly called. I just like partying with the guys, and I love sex. Period. The end. So why does Rowen’s opinion matter to me?”

Rowan is the Texas Mutiny rookie. As the son of a soccer legend he has grown up with football, it’s basically all he knows. From an early age his parents have taught him to treat women with respect, his coach in college also told him to be an example, not to be a player. Groupies are not unfamiliar to Rowan, but to see his teammates party with them and the things they do… To say Rowan is shocked is an understatement, especially because he actually likes one of the groupies. Tiffany intrigues Rowan, he doesn’t like her actions, but he sees her as a nice girl and he wants to get to know her.

“Even with the hot water pounding my muscles, I can’t relax.  Just knowing what these guys think of Tiffany, the way they talk about her behind her back, it’s enough to make me want to beat the shit out of them.”

The moment Tiffany and Rowan meet there is a connection between them. Tiffany is a bit surprised; Rowan doesn’t want sex like the other men, he wants to talk to her, wants to know her. After a bit of a rocky start the couple starts to spend a lot of time together, and Tiffany learns that there is much more to a relation then just sex. It’s about the intimacy, about friendship and getting to know each other’s hopes and dreams. Rowan has a hard time with Tiffany’s history, but he knows if he wants to be with her, he needs to let go. With a past like Tiffany’s you can feel something is about to happen, and of course it does. But Rowan, the gentleman he is, doesn’t want to dwell in the past, all he wants is a future with the beautiful girl.

As I already said, I didn’t like Tiffany in the previous book. She’s the party girl who doesn’t mind to have sex with married men, it’s just fun for her. But slowly, I started to like her, my heart broke for her when the bomb burst. She didn’t deserve it. Yes, her actions where not smart and she didn’t think about the people (namely the wives and girlfriends) she hurt while partying with her boys. But she didn’t do it alone, the men are just as responsible as she is, even more because they are in committed relationships. But this is the way society sees groupies; guys get a pat on the shoulders for sleeping with them, while the girls get shamed for being easy. I love how Rowan looks through Tiffany’s façade, and saw the sweet, smart girl she is.

“I try to convey how much reverence I have for her in my touch. To show her how precious she is to me. “I love you, Rowen,” she says, her voice breaking with emotion. “I love you, too, Tiffany. So, so much.”

I never thought I would love Groupie, but I do. I give the story of Rowan and Tiffany 4.5 stars. I can’t wait for the next book, Goalie.