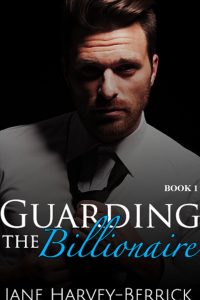 He’s a fast-talking, hard-hitting guy who goes to work with a weapon in his holster.
He’s also sexy, loyal and damn good at his job.

I work close protection. I’m the silent bodyguard at the back of the room. I’m the eyes watching you.
I’m the ears listening to you. And I’m the dirty-mouthed grunt with the gun who’ll take a bullet for you.

I’m the man in black, guarding my billionaire boss.

There are a lot of romance books about billionaires with a kinky side, who surround themselves with an army of employees. These stories follow the rich guy falling in love, but how about the people that work for them? What do they think of their boss’s antics? Guarding the Billionaire tells the story of Justin Trainer, who works as a bodyguard for the rich and famous. I’ve enjoyed the first part of the Duet very much.

“I’m the silent bodyguard at the back of the room. I’m the eyes watching you. I’m the ears listening to you.”

Justin (or Trainer, as he goes by his last name most of the time) is a former Marine who now works as a bodyguard. In his army days he has seen humanity at its worst, but being a bodyguard isn’t a walk in the park either. Working closely with rich/famous people makes him a voyeur of all the good, bad and ugly that money can buy. His current ‘project’ is Devon, a young billionaire; very smart and with some kinky tastes. But Trainer likes the guy, and the other people who work for him. He even meets Rachel, someone who makes him feel a better man.

Trainer is a good guy. He knows he has made mistakes in the past, but he tries to make up and do better. Guarding the Billionaire is mostly told through his eyes, so we get to know Trainer pretty well. He lives as an observer in a world that is not his, where rich people do as they please, forgetting the people who work for them. Most of the story is about Trainer and the guy he guards, but there’s also room for romance. Since this is part one of a duet, I’m very curious for the second book. I need to know what will happen with Devon and with Rachel.

“Everyone has a price. Even me.” 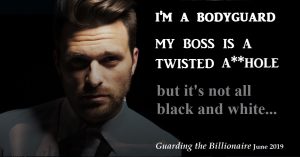 There’s a certain technique to handling a naked girl—and I mean that in a strictly professional way.

This one looks about sixteen and she wasn’t expecting to see me. Probably because she’s hiding in the closet of Russell Vassal, lead singer of chart-topping boyband Rock Boys.

You’ve never heard of them? Yeah, well, count yourself lucky. I hadn’t heard of them either until I joined their world tour a month ago.

I grab a quilt off the bed, bundle her up and hand her off to a female security officer, hoping that when the kid sees her idols aren’t as squeaky clean as she thought, she’s not traumatized.

But at least she won’t lose her virginity tonight, because it’s my guess that’s what she’s offering. Jeez, she looks so young.

The blond kid, the drummer, is snorting coke off a pair of tits belonging to a red-haired groupie when my phone rings.

I see my wife’s name and my sphincter tightens. Against my better judgement, I answer.

These days, it’s what passes for a conversation with my wife of eleven years.

She takes a deep breath and I can hear the venom in her voice.

“And I’m going for full custody of Lilly. It’s not like you ever see her anyway.”

The call drops and just like that, my evening is officially fucked.

Then the drummer, Derrick, comes in his pants while motorboarding Colombian marching powder.

Sighing, I signal one of the other bodyguards to take him to the bathroom and clean him up, or at least get the evidence out of sight. I’ve already confiscated every cell phone in the room, but I can’t afford to be too careful. There’s money in celebs making asses of themselves, and the person who has the evidence is gonna make some serious moolah.

I’m paid the big bucks to stop that from happening.

Milton, a heavyweight dude covered with tattoos and a scar down one cheek, throws me an annoyed look as he walks toward me, but he doesn’t argue. Instead, he grabs the kid by his collar and manhandles him out of the room.

The groupie stares at me with huge brown eyes, the pupils shrunk to pinpoints. She strokes her tits and offers them up to me, her head cocked on one side.

I’m not tempted in the slightest. Sloppy seconds from a groupie who’s serviced every guy on the tour bus including Jerome the geriatric driver? No thanks.

Besides, I wasn’t lying to Carla—this is my work. Currently, I’m on tour with the hottest boy band on the planet. At least, that’s what their marketing whizz kid tells me. All I know is that each day I have to listen to their crappy pop music that makes my ears bleed, and each night I have to watch them partying it up with groupies, hookers, and assorted suppliers—meaning dealers.

Their big hit is Strolling with Rocks. No, I’m not making that up.

My life full of knocks

In a damn big box.

Teenagers love it because it’s deep.
The world is doomed.