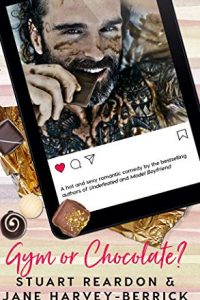 Career girl and radio host hotshot Cady Callahan has never met a chocolate she didn’t love. She has curves and doesn’t care.

She’s shocked when a raffle ticket bought to support a veterans charity means she’s won a year’s membership to Body Tech, an exclusive Manhattan gym, where all the top athletes train and all the A-list actors go to get in shape for their action roles. She’s also won a personal trainer in the shape of far too tantalizing Rick Roberts.

Rick is less impressed when Cady’s arrival leads to a media circus. The retired British rugby ace runs a serious training facility, and he definitely doesn’t have time for anyone who doesn’t want to work hard.

When curvy Cady challenges him to train her to run a marathon by the end of the year, it seems a solution to both their problems. If … when she drops out of training, his gym will go back to normal.

But Cady isn’t planning on losing the bet—she just wasn’t counting on any complications. And surly Rick is very complicated. And as tempting as the tastiest treat...

Falling for somebody who seems to be your total opposite? Gym or Chocolate? tells the funny and sometimes hilarious story of Cady and Rick, who each live in a different world when it comes to food and fitness. I love it.

Cady and Rick are very different people. Both are confident in their own skin, but they each have a different outlook on life. Cady is enjoying her life to the fullest. Yes, she knows she’s a big girl, but she has embraced her curves. And divine tasting food… And avoiding everything that’s remotely connected to exercising… Rick’s life on the other hand is all about control; a strict fitness regime and only eating healthy, nutritious food. Yes, Cady and Rick can’t be more different, but they also can’t deny they’re attracted to each other.

Like other books by this author duo, Gym or Chocolate? is a relaxed story with characters who act and talk realistically (most of the times). No flowery phrases, no internal quoting of Shakespeare, just normal people speak. Although it’s basically a simple story – opposites fall far each other but try to fight it for a while – the unfolding story holds your attention throughout the book. The story is told through Cady and Rick’s eyes, giving an insight in both thoughts and emotions. I love how they both change, but also stay true to themselves.

Gym or Chocolate? is a funny, romantic comedy. Reading the story brought a big smile on my face and caused the occasional eyeroll (in a good way!). Yes, there is a bit of needed drama (a smooth ride into the sunset would be a wee bit boring, right?), but nothing over the top or dramatic. I love Cady and Rick together; they are a perfect couple and bring out the best in each other.

I love Gym or Chocolate?, I give the story of Cady and Rick 4.5 stars. 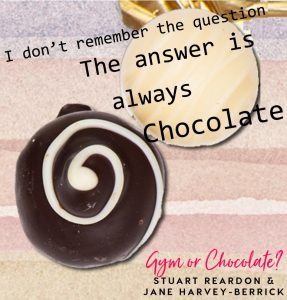 I set off down the jogging track at a gentle pace, not much more than a fast walk. I tried to keep up the general conversation to take her mind off running, but she was puffing and panting so badly, it wasn’t possible.

Besides, her tits were jiggling all over the place and I could tell that she wasn’t wearing a sports bra. Hell, it didn’t even look like she was wearing a bra at all. It was totally distracting and even though I tried to look away, I couldn’t help staring—they were so in my face with a momentum all of their own. Jesus, they were even moving in different directions. I’d seen strippers perfect that move but never someone just out jogging. How the hell did that work?

I was so mesmerized, I strayed over the dividing line between joggers and cyclists.

“Get out of my lane, asswipe! Aaaagh!”

But it was too late. Distracted and off balance, I stumbled, taking out a cyclist riding in the opposite direction. I was a big guy and I sent him sprawling to the floor, landing on top of him and his bike.

Cady looked as though she wanted to laugh but she was too out of breath.

She stood to one side, taking a breather, as I apologized profusely, lifting his bike off him and helping the guy up. He rode away muttering under his breath about suing your British ass the next time.

And she pulled out a KitKat from her running sock.

“Rick, can I ask you a question?” she mumbled around a mouthful of biscuit and chocolate.

“Sure,” I sighed, eyeing the evidence of her chocolate habit.

“Were you looking at my boobs?”

My eyes shot up to meet hers. Busted.

I felt my cheeks redden.

“So, do you always mow down cyclists coming towards you? Just admit it, I know you were looking.”

“Bloody hell, Cady! It’s hard not to notice!” I exploded. “You were jogging in one direction and your … chest … was jogging in another direction—it’s like there are three of us out here! It’s not professional! You should be wearing a sports bra.”

She turned purple, laughing so hard that her eyes were streaming, and then she started choking on her KitKat.

Great, now my client was going to die laughing in the middle of Central Park. 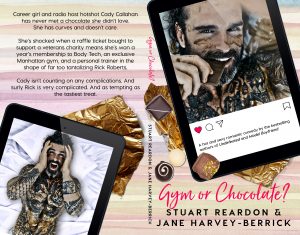