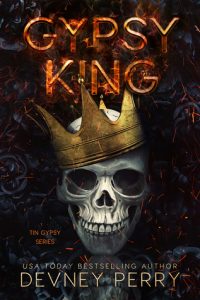 The former Tin Gypsy motorcycle club has everyone in Clifton Forge, Montana convinced they’ve locked their clubhouse doors and ripped off their patches. Everyone but Bryce Ryan. There’s more happening at the club’s garage than muscle car restorations and Harley rebuilds. Her instincts are screaming there’s a story—one she’s going to tell.

As the new owner of the small town’s newspaper, Bryce is hungry for more than birth announcements and obituaries. When a woman is brutally killed and all signs point to the Tin Gypsies, Bryce is determined to expose the club and their leader, Kingston “Dash” Slater, as murderers.

Bryce bests Dash match after match, disappointed her rugged and handsome opponent turns out to be an underwhelming adversary. Secrets are exposed. Truths defeat lies. Bryce is poised to win this battle in a landslide.

Then Dash breaks all the rules and tips the scales.

A curious, stubborn reporter who doesn’t know how to give up, and a biker who prefers to leave the past in the past … A match made in heaven or a recipe for disaster? Gypsy King tells the story of Bryce and Dash who fall hard and fast for each other, I love them together.

Bryce recently moved to Clifton Forge and is now the co-owner of the local newspaper. Her previous job at a television station didn’t work out the way she wanted, but that doesn’t mean she has given up on her investigative skills. Her search for a big, newsworthy story brings her straight in the path of Dash, president of the local biker MC. Bryce is nosy, Dash doesn’t want to reveal his club’s secrets, but both can’t deny the attraction between them.

Bryce isn’t very good at listening to other people, but I fully understand her curiosity. An MC with a ruthless past, and a hot new president… She smells a story and goes for it. Dash finds it amusing, but he also gets a bit protective of Bryce. I get him, the Tin Gypsies are on the straight path, but their old ‘friends’ are not. Bryce and Dash keep bumping into each other, and it doesn’t take long before the inevitable happens. I love Bryce and Dash together, they’re perfect for each other.

Gypsy King is the first book in a whole new series by Devney Perry; the ‘Tin Gypsy Series’. It introduces us readers to the Tin Gyspies, the small town of Clifton Forge and its people. Of course, Gypsy King is all about Dash and Bryce, and their whirlwind romance, but there’s so much more going on. Murder, old enemies and family secrets, just a few of the things our couple has to deal with. I love this mix of romance and suspense; it makes me curious for the future books in this series.

I love Gypsy King; I give the story of Bryce and her Dash 4.5 stars. 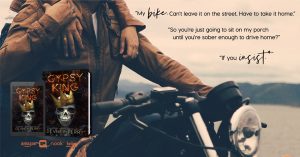