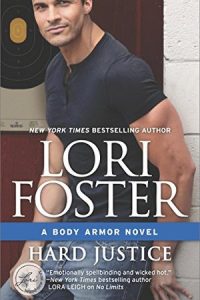 Playing it safe has never felt so dangerous…

Justice Wallington knows how to harness his strength and intimidating size—skills he put to good use first in the MMA cage, and now as a bodyguard at the Body Armor agency. But no opponent has ever left him feeling as off balance as his new client, heiress Fallon Wade. Far from a spoiled princess, she's sweet and intriguingly innocent. It's a risk-free assignment, until he's required to fake a relationship with her in order to blend in.

Sheltered from the world after a family tragedy, Fallon longs to experience life—going to bars, dancing, talking to strangers. Not easy with a huge, lethal-looking bodyguard shadowing her every move. Justice seems like her polar opposite, but pretending to be a couple stirs undeniable heat. And when danger strikes again, it's not just her safety in jeopardy, but a passion that's real, raw and absolutely against the rules…

Fallon is a young woman who hasn’t seen much of the world. After the death of her elder sister her parents kept their only remaining child close to them. Not in a bad way – they love Fallon very much – but she wasn’t able to do the things a normal 24-year-old would do like going out and dating. To give her a bit of freedom, Fallon’s parents have hired her a private security detail so that she can go out and explore the world to a certain degree. Fallon doesn’t have much experience with men, but she knows her security detail – Justice – is something else.

“I had a nice time.” “I’m glad.” “Even though no one would dance with me.” Smiling, her mother said, “Perhaps Mr. Wallington wouldn’t allow it?” “Maybe,” Fallon said. “He has this crazy death stare, way worse than dad’s, and it terrified everyone. I don’t think Justice knew that I noticed, but I did.”

Justice is a former MMA fighter who now works for a security firm. He was a pretty decent fighter, but he realized he wasn’t meant for the top ranks. And instead of holding on to an impossible dream, he faced reality and picked another career. But since he’s used to training and staying in shape, Justice is still close with his former fighter buddies and still trains with them. Guarding the daughter of a rich couple is business as usual for Justice, but his reaction to her is anything but normal.

“So neither one was safe?” Idly turning the beer, he surveyed her, then shook his head. “Looking like you do, not sure anyone in here is safe. At least, not to daddy’s standards.” Making air quotes with her fingers, Fallon mimicked his voice and said, “Daddy’s standards.”

Fallon and Justice come from very different worlds, but somehow they just click. Justice very quickly realizes there’s much more to the bit naive Fallon, and Fallon is curious for the man so different from the other men she knows. They start out in a professional way, but gradually the couple becomes friends and spend a lot of time together. Fallon is eager to explore the world, and Justice shows her how to live a normal life. Getting romantically involved is only the natural next step. Justice is a big strong guy, but with Fallon he’s sweet and gentle, just as she deserves. I love them together!

I have to admit that Hard Justice is actually my very first book by Lori Foster. I know she has written a lot of books already, but for some reason I never picked them up (but I will from now on). I really like this book; it’s well written and the characters are very likeable. Fallon is a sweetheart; despite her upbringing she’s a down-to-earth girl who wants to make it on her own and doesn’t care what other people think. I really like her, it would have been so easy for her to be very different. At the beginning of the book I wasn’t a big fan of Fallon’s father, I was glad he turned around and learned to listen to his daughter.

“What would you think about planning a wedding, oh, a year or so from now?” A rush of emotion filled his chest until Justice could barely catch his breath. Fallon glowed with confidence, rightfully so, and he loved it. He loved her. Now and forever.”

I’ve enjoyed reading Hard Justice, I give the story of Fallon and Justice 4 stars. 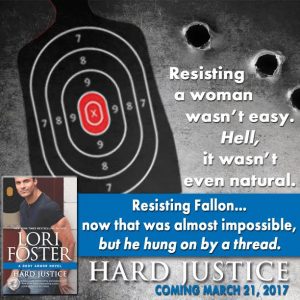 “If anything happens to her, we will hold you and the agency personally responsible.”

“That I am.” Though Justice spoke to her father, he didn’t look away from Fallon, and she shivered at the deepness of the voice that stroked over her skin like a warm caress.

“She also said you were a professional fighter,” her father continued.

“Was once,” Justice agreed. “I fought with the SBC, but I don’t compete anymore.”

Ah, a fighter. Fallon gave him another quick glance. She supposed that explained the damaged ear, crook in his nose and the outrageous hairstyle. “Not a boxer,” she guessed.

“Mixed martial arts, so kicking, grappling, submis­sions, but yeah, I’m a pretty good boxer, too.” He jok­ingly threw a few shadow punches, then, with a glance at her dad, quickly sobered. “Not to brag or anything.”

With a critical eye, her father said, “Admittedly, you’re not what I expected.”

“You were looking for Rocky Balboa? The one in the later movies, not the first? He did get slick in the last few, huh? That’s not me, though. Never will be.”

Such an outpouring left her father stymied for a mo­ment. “Well, my wife and Ms. Silver did suggest that you’d be able to blend in.”

Fallon remained on the last step—and still Justice towered over her. She smiled up at him. “That was my stipulation. That you be able to blend, I mean. I didn’t want a bodyguard to be super conspicuous. But seeing you now, I can’t imagine you blending in too easily.”

“You’re rather large to blend.”

“Depends on where we go, right?” He took her elbow and very unnecessarily helped her down the last step. “Bar, club, steakhouse—no one will pay much attention to me. In this house?” He looked around as if a little put off by the grandeur. “Or a fancy party?” He rasped a big hand over his beard stubble. “I can shave, spiff up a little and force myself into a suit, but that still might not do the trick.”