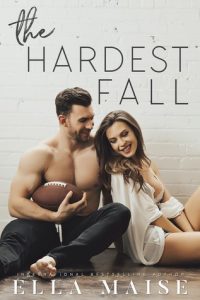 The first time you meet someone, you make eye contact. You smile, say hello. Should be simple, if you’re anyone but me. The first time I met Dylan Reed, I found myself making eye contact with a different part of his body. You see, I’m very good at being shy, not to mention extremely well-versed in rambling nonsense and, unfortunately, rather highly skilled at making a fool of myself in front of a guy I’m attracted to.

At the time, I knew nothing about him and thought none of what I said would matter since I’d never speak to him again. Turns out, I was very wrong. He was the star wide receiver of the football team, one of the few players expected to make it into the NFL, and I ended up seeing him all over campus.

I might have also propositioned him, run away from him, attacked him with a cooking utensil…and…uh, maybe I shouldn’t tell you all of it. It’s pretty normal stuff, things you’d expect…from me. Eventually, the time came when I couldn’t hide anymore—not that he’d have let me even if I tried.

Before now, he never knew I was secretly watching him. Now that we see each other every day, he knows when I have a hard time looking away. It doesn’t help that I’m not the most subtle person in the world either.

He smiles at me and tells me he finds me fascinating because of my quirks. I can’t even tell him that I think my heart beats differently whenever he’s around.
He thinks we’re going to be best friends. I think I have a big thing for him, and the more I get to know him, the more I don’t care that I’m not allowed to be his friend, let alone fall for him.
The thing is, that’s exactly what I’m doing—what we’re doing, I think.
Falling.

Three times is a charm! After having met and shared a tiny ‘moment’ twice, Dylan an Zoe get a third chance. The Hardest Fall is a sweet story about two young people who become friends, and slowly start to fall for each other.

“I wasn’t fast enough because I was busy trying to figure out how she had come into my life out of nowhere and how I was going to survive her.”

Dylan and Zoe have seen each other around campus, but then they unexpectedly become roommates; Dylan to get away from a situation involving some of his team/house mates, and Zoe because she’s Zoe (sorry to be so vague). Dylan and Zoe seem very different but living in the same apartment creates a bond and soon they’re friends. But since this a romantic story and not one about besties, keeping it just friendly is impossible.

“Was it too forward to hug a friend like this? If we were being honest, calling him my buddy or friend was stretching the truth a bit but was I gonna stop or back away? Nope, not a chance in hell.”

Zoe and Dylan are attracted to each other, but both are not looking for love. Dylan’s life is busy enough as it is with football, and Zoe is in the middle of a complicated situation. It’s not her fault at all, but she’s the one who kind of pays for it. Zoe and Dylan are young, but both act as responsible young people who know what they want with their lives. I love how Dylan and Zoe try to fight their attraction, but (not so) miserably fail.

For a moment I thought Ella Maise was taking this story in a certain direction, but after having told myself this author wouldn’t do that, I started to enjoy this story much more. I felt sorry for Zoe, she was in a bad place and couldn’t do a thing about it. But I get why she kept going, I would have done the same. Dylan is an awesome guy and not your typical womanizing football star, I love him for Zoe, he’s exactly what she needs. And the epilogue? Swoon, I love the life Zoe and Dylan have built.

“You’re my hardest fall. No one has ever compared, and no one ever will. It was always going to be you for me.” 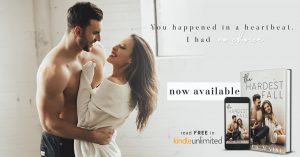 I stopped speaking when Dylan’s gloved hand—his huge gloved hand—cupped my cheek and gently tilted my face up. The world around me slowed down, and I stood still. I swear to you, I watched his eyes roam my face in slow motion.

I managed to force a nervous smile. His thumb moved on my cheek, rendering me…basically completely helpless.

Forgetting myself, forgetting where we were, I whispered, “I like watching you.”

His tongue peeked out and touched his lower lip. “I know.”

Oh, Dylan, why did you do that?

The question shut me up pretty quickly, which was probably for the best; who knew what else I would spew out.

“Because I can’t take my eyes away from you. Everything else…it all disappears, and…”

I tried my best not to look eager for his answer—or let’s say not too eager, because there was no way he couldn’t tell I was very interested and invested in hearing what he was about to say.

He let out a heavy breath and decided not to finish that particular sentence. I’d seen it in his eyes, a slight change, there and gone.