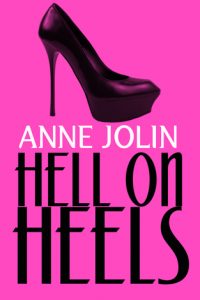 I use people. Not in a malicious way, but in the way an addict abuses their substance of choice. People are my vice—men specifically. I crave the emotional high they give me with a unique and reckless disregard for my own well-being—eagerly floating into an unsustainable euphoria, knowing full well that after every high comes an equal, if not more powerful, plummet into a devastating abyss. But like every junkie, I crawl willingly back into the arms of my demons.

Oh, the price we pay to feel loved. We’d all sell our souls to the devil himself for that. Perhaps I have already.

They say that acknowledging that you have a problem is one of the first steps to recovery. Well, in that case, my name is Charleston Smith and I have a fucking problem.

I know Anne Jolin for her Alpha books; protective Alpha men with a little rough edge falling for sweet, sassy women. Hell On Heels is her latest book, and it’s a little different from her other books. The pleasant writing style is the same, but the story is very different. However, I loved it.

“My need to soothe the loneliness inside me would have to be remedied. It was in those such instances I often chose to attempt to develop something with a suitor in my life, thus finding a handsome man to deliver me to heaven and return me to hell.”

Charleston has a busy life with her event-planning firm and her charity organization. The organization is dedicated to help the families of addicts, and to help youngsters stay clean. While to the outside world she is the prefect, organized woman, inside she is a mess and can’t have functional relationships with men. As a young woman she’d experienced traumatic heartbreak; her boyfriend disappeared without saying goodbye, and a few months later she found her addicted brother, death. She didn’t want to forget her sorrows with alcohol or drugs, instead she chooses a different addiction; men.

“In a way, I loved being unattached. I was able to fill the holes in me with the affection of multiple men, not necessarily always at the same time, and it stopped the bleeding. I was a functioning addict. The high of male adoration kept my stride steady until, well, it didn’t.”

While organizing the yearly event for her charity, Charleston meets two men. The men are the opposite of each other, one polite, good looking and friendly, the other one with a rougher edge. Around the same time the long disappeared boyfriend suddenly walks back into Charleston’s life, reopening the hurt she felt when he left. While spending time with each man, slowly Charleston comes to terms with her past and sees what she wants from life, and from the man she’s going to spend it with.

Hell On Heels isn’t the love story of Charleston and her man. It’s the story of her finding her true self, to be happy with who she is, to love herself. Whatever man she chooses, isn’t important. The book is written in Anne Jolin’s familiar style, and since it’s solely in Charleston’s POV, it’s about her inner struggles, her dealing with her brother’s death, her deciding which man is the best for her true self.

Although this is not the usual romance book I prefer, I’ve enjoyed reading it. I give Hell On Heels 4.5 stars.

~~ Hell On Heels was provided in exchange for an honest review ~~