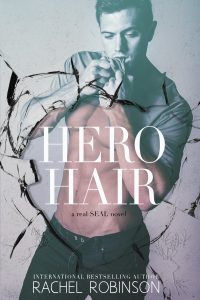 Everyone knows there is no “I” in team, but to Macs Newstead--orgasm-gifting, muscle-filled Navy SEAL hero--there are more important words than team. Words like victory and vanity and selfishness. People say those words like they are a bad thing, but to Macs, they’re simply tools in his highly effective arsenal. When a man’s entire existence revolves around the necessity to end lives, silly, mundane things like second dates or monogamy seem worthy sacrifices.

Downward facing dog or doggy-style--it’s all the same to Teala Smart, a whip-smart yoga instructor. She owns her studio like she owns her life--with focus, positive energy, and pure devotion. That devotion, however, does not trickle into her love life (or more accurately, her lust life.) Relationships are a roadblock to her success. They get in the way and tangle up emotions more than the lotus pose tangles up limbs. Men are best kept just for a night and then released into the wild before feelings get too messy.

HERO HAIR, the second novel of International Bestselling Author Rachel Robinson’s THE REAL SEAL SERIES, is the account of an life-altering journey detailing the awakening of two hollow hearts, both set on taking their own pleasures without any emotional attachment. The ruthless SEAL finally meets an enemy he can’t defeat, and both Macs and Teala find, against their wishes, and despite atrocious circumstances, a chemistry so explosive it leaves nothing but deconstructing love in its wake.

*Due to sexual content and language, this STANDALONE novel is suited for readers 18+*

Hero Hair is the second book in ‘the Real Seal Series’ by Rachel Robinson. Like her other books it tells a story about real people dealing with real issues in circumstances they can’t control. The blurb of Hero Hair intrigued me; two total commitment-phobes finding each other and trying to make it work… I love the story of Teala and Macs, even though it had some very angst-y moments (something that makes me scream).

“Can a human ever truly belong to another human? Can together stay that way long-term? In my experience it’s always temporary, a fleeting feeling of lust and happiness.”

Teala is a woman who has it all: she has her own yoga studio and when the mood strikes she has no problem finding a guy to spend some sexy times with. As a result of her childhood Teala doesn’t do relationships, she’s afraid to get hurt, and therefor sticks to one nightstands and bad boys. When her friends challenge her to take an absence of her normal ‘dating’ escapades Teala promptly meets Macs, her equal in every way when it comes to ‘dating’. She doesn’t want it, but she starts to fall for the handsome SEAL.

“Do I know that it’s not normal to desire him so quickly? Yes and no. Any hot-blooded woman would desire him. Most would never act on their desires. Would a normal woman be offended or put off by his forward suggestions? I’m not sure I can answer that affirmatively either. I want him and I’m blinded by it.”

Macs is a big Navy SEAL who travels the world and enjoys his work. Knowing relations and traveling all the time don’t mix – and seeing that with his colleagues – he sticks to casual hookups. It seems apps like Tinder are made Macs; swiping through the available women he’s always an hour away from some hot sex, no commitments. But, just like in his work, he always aims to be the best, never leaving a woman unsatisfied. When a friend sets him up with Teala, Macs notices very quickly she’s just like him and he has to have the beautiful woman. Too bad Teala just made a stupid bet with her friends…

“I don’t know her well, but even the small amount I’ve learned, has led me to believe she truly is a full, devious package. I want her body. I want it more now that I see that other men want her body. No one can deny the caveman response to others desiring the same thing.”

Teala and Macs are exactly the same: both love sex (a lot and lots of it) and both don’t do commitment, each for their own reasons. The moment they meet both feel the insane attraction between them, but due to Teala’s bet they don’t act on it (yet). Instead they are spending time together and this makes them think about the choices they make and why they only do casual sex. Slowly they start to embrace the idea they can actually make it work, that they can be in a normal relationship like other people. But when the world around them start to fall apart, so do they. Macs has to leave and defend the free world, and Teala… Well, she just loses it. Macs and Teala belong together, but it won’t be an easy road.

Rachel Robinson, what do you do to my poor heart! I know your work, and going in I knew Hero Hair wouldn’t be any different, but you still make me want to scream. Despite this, I love Macs and Teala. They are both realistic people who don’t make apologies and aren’t ashamed for what they like. The first part of Hero Hair is the normal ‘couple meets and gets to know each other’, the second part is what makes this story. Teala and Macs want to be together, but forces beyond their control make it impossible. Teala’s breakdown and healing where painful to read, but I understand her; she wanted to be Teala again, not just for Macs but above all for herself. I wanted to strangle Macs a few times in the second part, but that’s not fair. He was going through his own hell and did what was needed.

“Doubt isn’t in our repertoire anymore. Clarity comes when you can’t make sense of anything. You grasp what you want and forget everything else. His kiss takes over all of my senses. He only breaks to smile at me—no words are spoken, but everything is said. Macs is my clarity. My family. He’s my hero.”

I love the story of Teala and Macs, I give Hero Hair 5 stars. 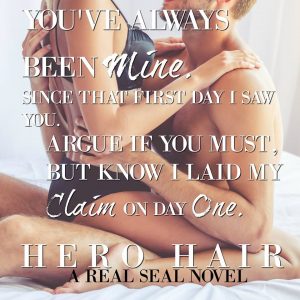 “Still want to have our third date?” he asks, pulling his t-shirt up to expose his abs. He bites the dark, cotton fabric, like men in fashion magazines do. With his abs flexed he poses so casual, so fucking drool-worthy, so over-the-top, and he gets away with it. He tosses the shirt onto the counter, with his tongue caught between his teeth.

I blow out a breath. It’s as hot as a Channing Tatum movie. More so, because I can actually touch this body–can do whatever I want with this body. “How am I supposed to say anything but yes when you don’t play fair? You’re over there with your goddamn abs and dimples and precision stripping skills.” I motion to his body.

“Babe, you played dirty first. Your mouth is like a fucking dirty poker game. One you’ll win every single time.”

I wrinkle my forehead. “Thanks I guess. Third date?” I ask, tilting my head to the side.