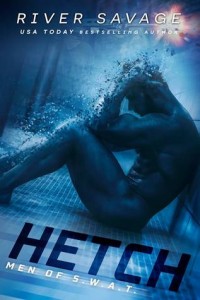 1 a: Keep safe or rescue (someone or something) from harm or danger.

Saving lives is the end goal.
It's a responsibility I live with every day, the reason I wear the badge.
Built on a brotherhood that runs deeper than blood, this way of life has become my very existence...

I thought I was saving her.

I never expected her to be the one saving me.

One of my favorite biker book series is ‘the Knight Rebels series’ by River Savage. Although it’s set in a biker world, the men treat their woman with love and respect, don’t treat them like dirt. When I heard the author was working on a whole new series – and this time involving members of a SWAT team – it immediately caught my attention. Hetch surely didn’t disappoint.

“I once heard you can trace who you’ve become in this life to three external factors: ten defining moments; seven critical choices; and five pivotal people. I’m not sure how true it is, but it’s one of those things that always stuck with me.”

Three years ago Liam (aka Hetch) watched the suicide of his own father; he did try to talk him out of it, but he couldn’t stop him. To this day his suffers from the aftermath, trying to drown his demons with alcohol and the company of women. When he meets the beautiful Liberty at his usual hangout, it doesn’t take long before he realizes she and his annoying neighbor are one and the same. Even though she gives him a hard brush-off, he can’t stay away from her.

“I wasn’t lying when I said she was unexpected. She excites me, intrigues me, and even if the night ended the way it did, it’s the first time in a long time I’m looking forward to more. More what, I don’t know. But I can’t wait to find out.”

Liberty just started her life over. After she found out about the cheating of her boyfriend she moved to a different city, closer to her work as a youth worker. She’s passionate about her work, truly cares for the youngsters under her care. Being newly single she promised herself no men and no sex for six months, no meaningless hookups. The only problem is her new neighbor Hetch; with very thin walls she hears some of his sexcapades. When she meets him in real life and figures out he is her neighbor she does her best to fight the pull between them.

“Is this supposed to impress me?” At this point, I don’t know why I’m still engaging. Sure he’s hot, dangerous dimples, and looks amazing in the tight jeans and dark Henley he’s wearing, but the man is cocky as hell. That combo never mixes well.”

From the moment Liberty and Hetch meet there’s an instant attraction between them. After a little rough start Hetch helps Liberty out with a dangerous, work-related situation and slowly Liberty lets down her guard around him. The couple together is fun; Hetch tries to be all Alpha, but Liberty fights him at every corner. When they finally do have sex, it’s hot and explosive, Hetch is one dirty talker. Before they have a chance at a happily ever after the couple – mainly Hetch – has some tough battles to fight, but in the end they both choose each other.

Hetch is the first book in ‘the Men of S.W.A.T. series’, besides Hetch and Liberty the main characters for the next books are introduced. This isn’t just a romance book; a lot of action takes place with Hetch’s SWAT team and a lot is told about their line of work and the other team members. I really like Hetch and Liberty, and I can’t wait for the stories of Kota and Payton in future books.

“I don’t answer her with a promise. Because the promise of something so big is too dangerous to lie about, especially with my job. Instead, I hold her against me and promise never to stop loving her. To never stop making her laugh, and to always come home when I can.”

I’ve enjoyed meeting Hetch and Liberty, I give their story 4 stars.

~~ Hetch was provided in exchange for an honest review ~~ 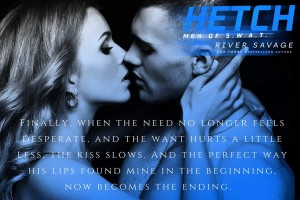 They say moments of clarity hit you hard. Like suddenly a deep understanding smacks you in the face. Your vision becomes unclouded, and a truth that’s been out of your reach rushes at you. It’s in that second your perception of reality becomes so clear you can’t begin to describe it.

Some call it beautiful, some say it can be saddening, some even compare it to the moment your drug of choice washes over you, offering a moment of escape.

I wish I could I say my moment of clarity is an epiphany or some kind of life-defining moment that showed me where my messed-up life is going.

No, my moment hits me as the first wave of the orgasm I’ve been chasing the last few minutes washes over me.

“Fuck, woman, wait for me this time.” His voice pulls me from my haze first, reminding me how messed up I am.
Heat covers my body, not from the life-altering orgasm, but from embarrassment.

“Don’t go shy on me now, babe.” He half chuckles, half growls, and even though there is a wall between us, the words wash over me; Goose bumps prickle my skin as if his warm breath whispered over me.

Slowly, as if by some freak of nature, apartment nine can see me through the wall, I roll off the bed and find myself on all fours.

Fully committed to my actions, I slowly army crawl my way to the nearest exit.

A strong tap on the wall halts my escape followed by, “You still there?” Another wave of humiliation crashes over me when I take stock of my predicament.

If I don’t get out of here fast, I’ll be drowning in so much embarrassment, nothing will resuscitate me.

Unable to form a coherent thought, and not willing to engage with the pervert, I continue to low crawl my way out of my bedroom and into my bathroom. Closing the door, I stand, and quickly walk to the shower. After turning the faucet on, I strip the rest of my clothes off, then step under the spray of the water.

Jesus, that was close.

I have no idea what I was thinking. In fact, I know I wasn’t. Which scares me even more.

I, Liberty Jenson, would never take risks like this. If asked what prompted this change in me, I’d answer with two things.

And a self-appointed sex sabbatical.

It all started when I moved into my new apartment. At first, I was excited, ready for a fresh start. After a messy break-up, which included dealing with a douche ex who didn’t know how to keep his dick in his pants, I needed a new place. Somewhere closer to town this time, secure, and most importantly, affordable. However, finding a place close to the city, which was secure enough to make me feel safe and would still leave me enough money left over from my program director’s wage, proved to be a feat. After searching for five weeks, I was about to give up, accept defeat and move in with my mom and dad again. I mean it wasn’t the worst thing that could happen to a single thirty-year-old woman.

Luckily for me, I didn’t have to resort to such desperate measures when this place came up two weeks ago. After a quick walk through, I fell in love with the two bedrooms, one bath, and open kitchen living area. I filled out the paperwork, paid my deposit, a month’s rent in advance, and moved in five days later.

That was until I realized how paper-thin the walls were between apartments.

It started out subtle, a sneeze in the early evening on my first night here as I settled into bed. A soft murmur of a man’s voice the third night.

But then came the sex.

The fourth night in my new apartment, I was woken to the low moans of what I assumed to be a needy woman.
My face heats up remembering the screams, the grunts. The deep baritone of apartment nine’s voice as he told the ‘bitch’ to keep it quiet.

Unsure what to do, I laid silent, listening to my new neighbor fuck some lucky woman into submission.

I’m not going to lie; I wasn’t turned on by it. I was set alight.

But it didn’t stop me from wanting it.

The deep grunts of pleasure.

I wanted it all.

I wanted it to be me.

“I’m officially going to hell.” I groan under the water, trying to wash the stupidity off me. Stupid would be the nice way of calling me a fucking idiot. And an idiot is what I am. Especially after tonight.