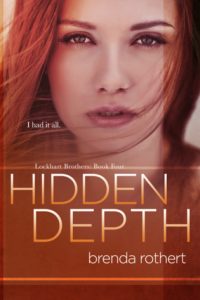 Breaking into the entertainment business as a teenager wasn’t easy. I spent years of my childhood traveling, auditioning and hoping my big break would come. And when I did, I rose to a level I never imagined.
Elle Tyler: model, singer and actress. I couldn’t go anywhere without security anymore. It was everything I ever wanted and more - fame, fortune and worldwide recognition. At age twenty-four, I was living a dream.

But a single act of violence shattered my fairytale existence. In a matter of seconds, all the goodness in me was ripped to shreds. Overnight, the people around me dropped away, moving on to find the next big thing. I gave up on myself, becoming a woman so dark and forlorn I no longer recognized myself.

But the stranger who saved me that day, Justin Lockhart, never gave up on me. He still saw light through my darkness. And as we grew closer, I started to see it, too. And I also started to see that before that terrible day, maybe I didn’t really have it all. Maybe I was always missing the only thing that really matters.

Hidden Depth is the latest book in ‘Lockhart Brothers Series’ by Brenda Rothert. I haven’t read the previous books in the series, but I didn’t feel I was missing important information to enjoy this book. Hidden Depth tells the story of famous Elle and upcoming lawyer Justin. I love their story.

“Silence settles over the room. It’s nice, because right now, I don’t want to talk to anyone about anything.”

As a singer, model and actress, Elle is a famous young woman who’s known across the world. Her life is full of constant travel, performances and paparazzi, but she loves her work. The downside of being famous is Elle can never be sure if a person wants to know famous Elle, or normal Elle. Having learned that lesson over the years the hard way she doesn’t let people get close, besides a select little group. When Elle’s life is turned upside down after a horrible attack, she knows she’s no longer the old, carefree Elle. While recovering she gets close with the man who found her after the attack, and slowly she allows herself to feel again.

“I set the phone down, my dreamy smile drifting away as I start to fall asleep. I’m going to need a little nap before spending the evening with Justin, who feels more and more like my man every day.”

Justin is at a crossroad in his life. On one side, he enjoys his work and time in St. Louis, but on the other side he feels lonely without his siblings, who he’s very close to. Recently he has decided to go back to his hometown and start working for the family law firm. When Justin finds a battered woman and helps her like any other person would do, to his surprise he learns she’s Elle, the woman everybody knows. He knows he’s just her savior, but he needs to hear from her how she’s doing. Soon he doesn’t see the injured woman, but only Elle.

“Elle, I’m Justin,” I say, offering her my hand. When she takes my hand and shakes it, I feel like someone knocked the wind out of me. Her skin is soft, and her eyes are a warm, radiant amber. Even in her injured state, she’s beautiful.”

To say Elle and Justin meet under bad circumstances is a big, big understatement. Elle has just been horribly attacked and Justin is the guy who finds her. Being in the hospital gives Elle time to think her life over, and she comes to the conclusion she wants things to change. Also, she starts to get feelings for Justin, one of the few people outside her tight circle who comes to visit her. Justin knows Elle has been through a lot, but he can’t help his growing feelings for her. Although their timing is a bit off because of the attack, Elle and Justin just feel right together.

Despite Elle’s horrible ordeal, Hidden Depth is a sweet book about two young people falling for each other. Yes, they have a few bumps in the road to their Happily Ever After, but nothing over-the-top. Even the whole situation with Justin and his past (which easily could have caused major drama), is solved… realistic. I’m glad the author wrote it this way and didn’t add extra drama for Elle and Justin. The aftermath of her attack is more than enough to handle. I haven’t read the other books in this series yet, but Hidden Depth made me curious for the other Lockhart brothers and their stories…

“So let’s start moving into our house today,” I say. “Now that I know I’m going to spend forever with you, I’m ready for forever to start.” She smiles up at me. “Me too. And I know our forever will be absolutely lovely.”

I’ve enjoyed the story of Elle and Justin. I give Hidden Depth 4 stars. 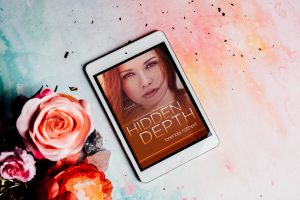