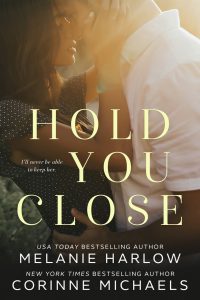 Ian Chase broke my heart at seventeen, and I’ve spent the last eighteen years hating him for it.

He makes it easy, with his smart mouth and playboy lifestyle—which I unfortunately have to observe since he lives behind me. Every time I see him climbing out of his pool, practically naked and unreasonably sexy, my blood boils.

I’ve always loved to loathe him.

I never planned to need him.

London Parish is my little sister’s best friend, not that it stopped me from falling for her.

Our history is complicated. The only thing we have in common is being godparents to my sister’s three adorable kids—until our lives are changed in one tragic moment.

Now we’re trying to raise the children we love, mourn an unthinkable loss, and fight an undeniable attraction.

My life is already upside-down, and the last thing I need is for old feelings to resurface.

Because I’ll never be able to keep her, no matter how hard I try to hold her close.

Can you fall in love again with the guy that broke your heart? Can you make it work with the girl that had your heart all along? Hold You Close tells the story of London and Ian, who have known each other a long time. There were moments I wanted to punch Ian, but overall, I’ve enjoyed this sweet story.

“Why did he kiss me today? Why is there still this spark between us? How is it possible to hate someone and still want his hands on you? I need answers.”

London is a successful sales analyst working many hours, Ian is the owner of a popular nightclub, who loves to party during his free time. London and Ian go way back; she is the best friend of his sister Sabrina and they were friends themselves as well. They even had a ‘moment’ in their late teens, but Ian made sure it did not go any further. Nowadays Sabrina is the only thing they have in common, otherwise they stay away from each other as much as possible. Until everything changes; Sabrina and her husband die and leave three children behind. For those children, London and Ian call a truce and both want what’s best for them.

“I need your help.” I laugh right in his face. “That took less time than I thought.” Ian runs his hand down his face and mutters under his breath. “Did you think it was easy to say that?” “Do you think I care?”

I really like London; she’s a very loyal friend, she works hard and knows what she wants. Losing her best friend is devastating, but she knows she has to go on for her kids. I understand her struggles when it comes to Ian; he’s the first guy she loved, he hurt her badly, she knows all about his playboy ways… But still, love works in mysterious ways… Ian, what should I say. On one hand he has built a successful business, on the other hand he’s over-the-top when it comes to women (sorry, hookups) and relationships. Some of his immature actions and furnishing of his spare bedrooms really made my eyes role. Sorry Ian, just no…

Hold You Close is a collaboration of Corrine Michaels and Melanie Harlow, and I’ve enjoyed it. I’m a fan of both authors, so I was curious what they would do together. The story has its sad moments of course, but seeing London and Ian fall for each other again was sweet. Add a couple of (very mature) kids in the mix makes the story even more real, it was good to see Ian grow in his new role as a parent. From the get-go it’s obvious London and Ian still have feelings for each other, but their road to a Happily Ever After isn’t the easiest one.

“I don’t think. I don’t move. I don’t even breathe. All I can do is feel. And in my heart I know this is my dream—this man, this family, this life we’re building together.” 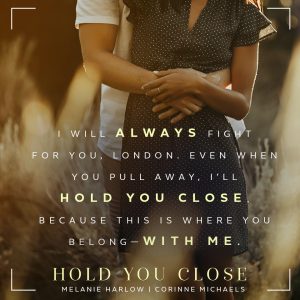 “Ian,” my bartender, Toby, calls with his hand out.

“You have a call.” He pushes the phone toward me.

No one calls the club for me other than vendors, and it’s eleven-thirty at night, so whoever it is can wait.

“I have to deal with something now, send them to my voicemail.”

He shakes his head. “She’s called three times.” The annoyance in his voice is clear, even over the music.

The only woman that would resort to calling the club is my ex-wife. God only knows what bullshit she wants now. For all I know she broke a nail, it’s my fault, and she thinks I should pay for her new manicure, or a hand replacement. She’s like the gift you’ve tried to return but can’t find the receipt for, so you’re stuck with it. I hate unwanted presents, and I hate Jolene.

“Send the devil to my voicemail,” I say and walk away.

I head out to the sidewalk. Drea wasn’t kidding, the line is nuts. “Hello, Officer,” I say to the pudgy cop standing next to the bouncer.

“Mr. Chase, we’re getting complaints,” he says, looking down the sidewalk at the line.

“I can’t help that we’re popular.” I shrug. “I’m at capacity, and can’t kick out the paying customers to take care of the line.”

“You’re obstructing the entrances of other businesses because of the way your overflow lines are set up.”

How the hell would they like me to handle it? We’re not inside the casino, there’s no way to control the line. I’m not about to turn away people when we hit the number ten. This is a business, and part of the free marketing I get is thanks to the line.

“All right, I’ll figure something out.” I grip the back of my neck.

I feel my phone vibrate in my pocket. If this is Jolene, I swear to God, I might lose my fucking mind.

The name flashes across the screen, London Parish. For fuck’s sake. Like I need to deal with my sister’s uptight, irritating best friend right now. London would be incredibly hot if she wasn’t such a raging bitch. I look at my call log and see this is the third time she’s called.

I walk down the strip a little, and after a few deep breaths, I call her back.

I smirk. “Well, this is a first. Did you have the stick removed from your ass?”

“Don’t. Not today, please. Just come here.” I hear her sniff and my protectiveness kicks in. Someone made her cry. We don’t get along at all—partly because we’re polar opposites and partly because of our history—but no one gets to make her cry.

“Not in the way you think.” Her voice hitches.

I’ve known London for twenty-five years. I can count on one hand how many times I’ve seen or heard her cry—I was the reason one of those times.

“What’s wrong? Is it an emergency? Because I’m at work and the club—”

I look at my watch and blow a deep breath through my nose. It’ll take me at least thirty minutes to get there. This is seriously a shitty night. “I’ll be there as soon as I can.”

Dread pulls at my stomach, telling me there’s something going on. I don’t know what, but I know I need to get there.

“Get rid of the line, no more get in,” I tell the bouncer, and then head inside.

Drea is at the bar, and my anxiety is starting to grow. London needs me there, why? What happened? Did someone break into her house? Mine? Maybe it has to do with an ex, if she even has one, or it could be nothing like that. Regardless, her voice was shaky and I can’t waste time wondering.

“I’m aware of that, but something came up. I need you to handle things tonight.” I turn to Toby. “Stay until Drea is done closing and I want you to escort her to her car at the end of the night.”

I never let her walk out of here alone. Even if I have someone coming home with me, Drea’s not going to be unescorted. Too many men get the wrong impression because she’s nice to them. Over my dead body will she be hurt as a result of working at my club.

After I get in the car, my mind is racing. I drive faster than I should, telling myself that London is just being dramatic.

And then I remember . . . she has my nephew and nieces at her house.

My foot pushes down on the pedal of my Jaguar, making the engine howl with each mile. I turn into the development where we both live, pass my house, and head to hers. I still hate that our backyards touch. Every damn day I see her sitting out on her deck, reading her books, looking down at me with her disapproving attitude.

When I get there, the flashing lights of a police car brighten the road. I don’t think. I don’t know if I even put the car in park before I’m out of the vehicle.

“London!” I yell as I rush through the door. “Christopher? Morgan? Ruby?” I call out for the kids, praying it’s not one of them.

When I get to the living room, I release a heavy sigh—they’re all there, not hurt.

Then I see the tears streaming down Morgan’s face. London gets to her feet. Her eyes are red, puffy, and black mascara runs down her cheeks. “Ian.” She chokes on my name.

The girls start to cry again, and my nephew pulls them into his arms.

London moves toward me, placing her hand on my chest. “They’re gone.”

“Sabrina and David,” she whispers.

Yeah, they went on a trip. Why the hell are they crying? “This is what you called me for? They’ll be home in a few days. Why are you crying too?” I ask.

Her green eyes meet mine and her lips part. “No.” She shakes her head. “They won’t.”

I look over at the kids again, and then to the muted television. My feet move closer, because I have to be sure the words flashing across the screen say what I think they say. “Flight 1184 crashes off the coast of Hawaii. Three hundred missing and presumed dead.”

My sister was going to Hawaii.

My sister is gone.

I sink to my knees in front of the kids, unsure what to say. They just lost their parents, and my heart is breaking. My sister was my best friend. She was the one who pushed me to open Veil and do what I wanted. I’ve always had her support, and now she’s gone.

Christopher lifts his head, his brown eyes filled with unshed tears. “They’ll find them,” he says with conviction.

“Okay,” I reply. We both know it’s a lie, but it’s one he has to tell himself. I remember being fifteen; there was no telling me I was wrong.

My own tears start to fall, as Morgan grabs my hand. “What do we do now?”

I have no fucking clue. How do I tell these kids how to survive? I’m the last person in the world equipped to give this advice. I look to London. Her hand touches my shoulder and she wipes the tears that fall silently down her cheeks.

“We hold each other close,” she says.