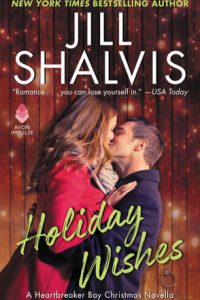 When Sean O’Riley shows up at the Hartford Bed & Breakfast for his older brother’s bachelor weekend, he’s just hoping to make it through the weekend. What he’s not expecting is to come face to face with the woman he lost his virginity to a decade ago—a woman he’s never really forgotten.

The last time Lotti Hartford saw Sean, she told him she loved him while he said nothing. Now, ten years later, she’s just looking for a good time. For once, she wants to be the wild and free one, and Sean – the good time guy – is the perfect candidate.

But as the weekend continues, Sean realizes that after a lifetime of being the hook-up king, he’s ready to find happily-ever-after, and he wants it with Lotti. But will she open her heart to him again? As Christmas sweeps through the little B&B, he can only hope love and magic are in the air.

It is that time of the year again. The holidays are approaching, and authors are coming with stories that embrace the feelings that come with it; love, winter, togetherness and warmth. Holiday Wishes by Jill Shalvis is a cute novella that contains all ingredients, I’ve enjoyed it.

“I want a chance to right my wrongs with you, Lotti. All of them.”

Sean and Lotti – or Charlotte as she prefers nowadays – where teenage sweethearts. But life happened, and the couple hasn’t seen each other in a long time. Sean is a party boy with no care in the world, but lately he has the feeling he’s missing something. He sees the happiness his brother has found with his fiancée, and he wants that for himself as well. After things ended with Sean, Lotti closed herself off a bit, afraid of getting hurt again. She tries to resist the grown-up Sean, but it’s hard. Can they have another chance?

“You blame me for hurting you, as you should. Trust me, I blame me too. I wish that I’d done things differently.”

Holiday Wishes is a sweet, quick read. Sean and Lotti have known each other for a long time (well their younger selves know one another), but both have changed a lot since those days. Like other books by the author this is a story with feelings, fun and sexy times. Because it’s a novella, the characters and the storyline don’t go too deep, and there isn’t much drama. And that’s probably my only issue with the story. I really like Lotti and Sean, but I wanted to know more about them, more about their backgrounds, especially Lotti’s.

“I want you to give me a chance.” “A chance at what?” Shifting so that he could press his forehead to hers, he said one word. “You.” Her breath caught. “Sean,” she breathed.”

I give Holiday Wishes, the story of Lotti and Sean, 4 stars.