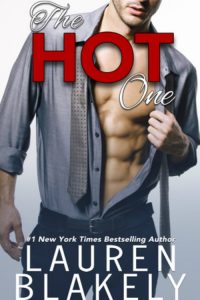 At first glance, stripping naked at my ex-girlfriend’s place of work might not seem like the brightest way to win her back.

But trust me on this count – she always liked me best without any clothes on. And sometimes you’ve got to play to your strengths when you’re fighting an uphill battle. As a lawyer, I know how to fight, and I’m prepared to fight hard for her. I might have let her slip through my fingers the last time, but no way will that happen twice.
***

He's the one who got away…

The nerve of Tyler Nichols to reappear like that, stripping at my job, showing off his rock hard body that drove me wild far too many nights. That man with his knowing grin and mischievous eyes is nothing but a cocky, arrogant jerk to saunter back into my life. Except, what if he's not a jerk . . .? He's the one I've tried like hell to forget but just can't. Maybe I’m cursed to remember him. My money is on him being the same guy he always was, but what's the harm in giving him a week to prove he’s a new man? I won't fall for him again.

But how do you resist the hot one…

The Hot One is Lauren Blakely’s latest romantic comedy and tells us the story of Tyler and Delaney. Throughout college they were a couple, until they weren’t. The Hot One is about their second-chance to make it work this time. It’s told in a double POV and I love it!

Tyler is a successful entertainment lawyer who loves his work and all the comes with the field. Being an entertainment lawyer wasn’t what he had in mind when he started law school, but somehow he ended up in the business. Tyler doesn’t have many regrets, but one of things he wished he handled differently was ending of his relation with his college girlfriend Delaney. Seeing her after eight years knocks him from his feet, he needs to find out if they can have a second-chance.

“I want to see her. Talk to her. Catch up with her. I don’t want stupid bullshit. I’ve had enough of that. I’ve had plenty of meaningless dates and pointless conversations. This woman was never pointless. She was everything, and that’s exactly why I’d had to slice her out of my life once upon a time.”

Delaney is the proud owner of her own spa where she works as a massage therapist (no, not with a certain ending, just your regular therapist). She’s happy with her life and her girl posse, but her dating adventures aren’t anything special. When Delaney sees Tyler after an eight-year absence, all the hurt feelings from their unsuspected break-up come back, and she doesn’t know what to think of the guy. She tries to ignore him, but she just can’t.

“We’re touching each other, and all at once, the drive to hurt him melts away. Fact is, I never wanted to hurt him. I only wanted to have him. And now that I’ve sorted out my shock, my annoyance, my frustration, my I-can’t-believe-you-had-the-nerve-ness, I’m simply done with it. With his hand on mine, I give in.”

Delaney and Tyler had it all in college; a loving relation, hot sex and they knew all about each other’s dreams. Until Tyler had a change of heart and ended it out of the blue, leaving Delaney hurting and with lots of questions. For Tyler himself it wasn’t easy as well, but he honestly thought he had to do it. Now, eight years later he knows he made a huge mistake, and he sees the unexpected meeting with Delaney as a sign. Delaney herself doesn’t like her reaction to Tyler. She’s still mad at him, but her body tells her differently. Of course, this is a romance book and the couple gives into their feelings and try to make it work this time.

I love Delaney and Tyler! Yes, Tyler is way over-the-top with his absurd ‘win-Delaney-back’ action, but his heart is in the right place. Understandably, Delaney isn’t sure what to make of Tyler; he cut her out of his life without an explanation and never looked back, until now. Back in the day the couple had shared dreams about law school, but it seems their separation had an unsuspected outcome. Tyler and Delaney became the persons they were meant to be, with their own career path. Being together now, more grown-up and all, only makes their bond stronger.

“I kiss her. It’s soft, but insistent. A kiss that promises we’ll make mistakes, but we’ll learn from them. A kiss that says we’ll try our best not to hurt each other, but when we do we’ll work on forgiveness.”

I’ve enjoyed reading The Hot One, I give the story of Delaney and Tyler 4.5 stars. 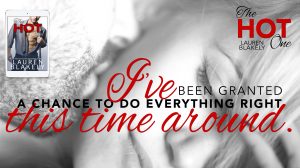 She turns her head.

That smile makes me feel like I can do this. Like I can win her heart again. Mine pounds faster as I near her, and it’s not just because I happen to think she’s the most stunning woman I’ve ever seen, but because of who she is.

I arrive at her side, and she straightens. “Hey.”

There’s that awkwardness again, and I want no part of it today. Like the bungee jumper I am, I lean in and dust a quick kiss on her lips. At first, she freezes. That won’t fucking do at all. My tongue darts out, flicking her top lip. A soft breath escapes her, and she gives in. Her sweet lips linger on mine, sending a charge down my spine. My brain leapfrogs ahead, and I picture scooping her up in my arms, carrying her to a quiet little patch of trees, and kissing her till she begs me to take her home.

I want that badly—I want her to beg for it because she’s at her happiest when she’s overcome—but I suspect it’s too soon for her.

Not to mention, screwing in Central Park usually results in a public citation. Public fornicators are never as clandestine as they think they are.

I nibble lightly on her bottom lip for a few seconds, drawing out a throaty murmur from her. Then I somehow find the will to separate.

She blinks. Several times. She sways the slightest bit, like her feet barely touch the ground. Good. I want her to be affected.

She furrows her brow. “I’m sorry, but do we kiss now when we see each other in the park?”

“Weird. Because I didn’t get that memo.”

“The memo,” I say matter-of-factly, like this is all so obvious. “You can’t take a kiss back.”

“You sure on that, Nichols?”

“I can try to take back the kiss. Want me to, sweet girl?” I use the term of endearment I once called her. She doesn’t blanch, and that’s a damn good sign.

I kiss her once more, like I’m reversing the lip lock, doing it all in rewind, pulling away ever so slowly, ever so softly, leaving her dazed once more.

If she can drive me this crazy, make me this hard, send the temperature in my blood to beyond incendiary, the least I can do is return the favor.

Judging from her reaction, I’m doing it right.

I gesture from her to me. “Like that. I think that’s how you take back a kiss.”

Chuckling, she nods to the running path. “Ready for me to kick your ass?”

Every competitive bone in my body snaps to attention. “We’ll see about that,” I say, then I smack her pink nylon covered behind.

That’s new, and it’s most interesting.

I pencil in a new item on my mental to-do list. Find out how much she likes spanking. I never spanked her in college—just wasn’t part of the repertoire. But judging from her response now, I’m more determined than ever to find out everything she likes in and out of bed. 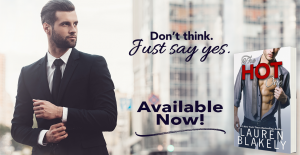