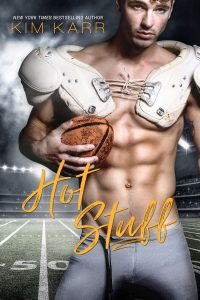 The NFL is full of rules. Rules I’ve never broken. Never challenged. Never even scratched–until the day Lucas Carrington crashes into my life with his hard body and I-don’t-give-a-f*ck attitude.

After I almost injure my father’s star player, I volunteer to make sure he’s in top shape. At first, it’s hell. I don’t like his cockiness, his easy smile. Don’t like the way he oozes sex. Or how his penetrating eyes follow me everywhere.

That doesn’t stop me from wanting him. He’s meant to be a distraction–something to occupy my mind for these precious few remaining hot summer nights before I’m forced to leave football behind forever.

I know what we’re doing will lead nowhere good. I know we’re crossing the line. And I know my father will never understand.

None of that matters.

But maybe it should.

Rules aren’t meant to be broken.

Based upon the blurb and the cover, I had certain expectations about Hot Stuff, Kim Karr’s latest book. I thought it would be a bit of a RomCom; funny, sexy and some over-the-top moments and actions. To my surprise this wasn’t the case. Yes, there were plenty sexy times, but the story also had its serious moments. I really like it.

Lucas is finally where he wants to be. Well, almost. Yes, he got drafted in the NFL, his ultimate goal since he was a teenager. But the team that have drafted him, not exactly his first choice. But Lucas doesn’t have a choice, and soon he’s all in, wanting to make it into the team. He can’t use a distraction in the form of Gillian aka Strawberry Fields, but she’s impossible to ignore.

Gillian is the coach’s daughter, but more importantly, she works as an athletic trainer intern for the team and takes her study very serious. Having lived around football players all her life, Gillian knows not to get involved with one of the guys, but Lucas aka Hot Stuff is something else.

“God, the shape of his biceps and his quads were incredible. He wasn’t huge, huge, like a lot of the guys. Don’t get me wrong, he wasn’t small. No, he was just right. See, I was obsessing. I couldn’t stand it. This had to stop.”

Hot Stuff is a standalone story (but there are possibilities for spin-offs) told in a double POV. As already said, I had expected a more ‘fun’ story based upon the blurb, but I’m glad about the direction it took. I like the writing, and the mix between all the sports events and personal moments. As a non-sporty I’m not sure the NFL-world is accurately described, but I liked what I read.

I really like Gillian and Lucas. Not just as a couple, but also as individuals. Gillian is a hard-working woman who knows what she wants and doesn’t give up on her dreams. Lucas is the cocky football player, very sure about himself, football is literally his life. This is a romantic story, so of course there is some drama, but for once it doesn’t involve ex-partners or sleazy football groupies. I love that fact; a story doesn’t need too much drama.

“Here he was, with me, touching me, wanting me, owning me, loving me, and it felt so good. It felt so right. It felt like home.”

I’ve enjoyed reading Hot Stuff, I give it 4 stars. 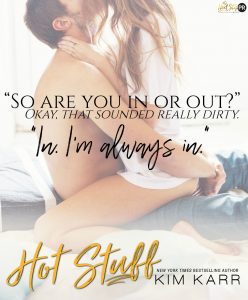