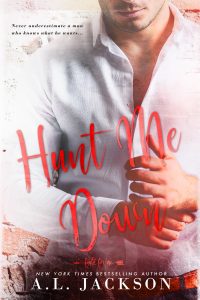 Never underestimate a man who knows what he wants . . .

Broderick Wolfe is a man accustomed to getting what he wants. He will hunt it, fight for it, and make it his own.

Lillith Redd is a straight-laced attorney who’s dedicated her life to serving the people of her hometown of Gingham Lakes.

When Wolfe Industries sets its sights on leveling the old part of town and building a high-rise hotel in its place, Lillith steps up to go toe-to-toe to with its owner.

Little do either of them know, they’ve just met their match.

Hunt Me Down is a modern-day reboot of Little Red Riding Hood set in the world of A.L. Jackson’s bestselling Fight For me series, originally a part of the Glamour Anthology and previously titled Red Hot Pursuit. This novella is a fun, flirty, uber sexy contemporary romance. The only fantasy happening here is in the bedroom. So hold on—you’re getting ready to sink your teeth into something hot and sweet.

Disclaimer: This book was originally titled Red Hot Pursuit in the Glamour anthology. It has not been changed or added to in any way. This novella does not need to be read before Show Me the Way and does not give away any spoilers for other Fight for Me novels.

Hunt Me Down is a short story by A.L. Jackson. If you think the story of Lillith and Broderick sounds familiar, that’s entirely possible. It already has been published in the Glamour Anthology as Red Hot Persuit, but it’s now published as a novella in the ‘Fight for Me Series’. I haven’t read it before, and I love this cute, naughty story of ms. Red and mister Wolfe.

“Maybe it was a little sick that I’d come to crave this game. Cat and mouse. Round and round. She was sharp and obviously loyal. I’d never even seen her. But apparently, I didn’t have to.”

Lillith is working as an attorney in the small town of Gingham Lakes. It’s her hometown; the people and the city itself mean everything to her. When new money and ideas walk into town, she sees it as her obligation to help her fellow-citizens, to keep the things as they are. Broderick is the guy behind the money and ideas, and going to a small town to secure some property isn’t his style. Too bad a certain attorney has peaked his interest…

“What was most frustrating was the fact that even in its silence it skated my skin like sex and sin. No question, that was what this man was. Sin. Wicked and immoral.”

Hunt Me Down is set in the same town as Show Me the Way, but it’s a completely different book. Yes, throughout the story you see bits of A.L. Jackson’s normal, touching style, but mainly it’s more fun and over-the-top. It’s an insta-love story; everything between Broderick and Lillith goes at record speed, but it’s fun to read.

Normally I’m a bit over the insta-love stories; it’s just too much too soon, and a lot of the time characters or situations are just added for the sake of drama. Hunt Me Down has a bit of that, but I love to see an author doing something different. A.L. Jackson’s stories always make me feel a lot, so I’m glad to read a more fun story by her.

“I loved her skin. I loved her body. And God, how much I loved the woman. Finding someone like her hadn’t been in the cards. But we were never in control of the hand we’d been dealt. I’d been dealt a straight flush. Lucky me.”

I’ve enjoyed reading Hunt Me Down, I give the story of Lillith and Broderick 4 stars.

Tags A.L. Jackson, Fight for Me, Hunt Me Down, New Release, Review