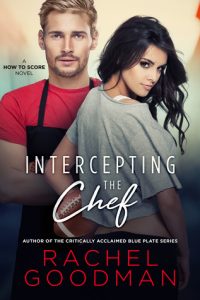 “Smart, sexy, and funny” (Publishers Weekly) contemporary romance writer Rachel Goodman is back with a brand new series about a quarterback trying to score in the most important game of his life—the game of love.

Gwen Lalonde is a rising star in the eyes of the elite restaurateurs of the world. But when her celebrity chef boss and now ex-boyfriend fires her, she finds herself playing a different game. Forced to flee San Francisco and return home to Denver, Gwen lands a spot as the executive chef at Stonestreet’s, a new restaurant owned by NFL golden boy and Colorado Blizzards quarterback Logan Stonestreet. When Logan starts pursuing Gwen romantically, she pulls a classic duck and weave and avoids any advances by throwing herself into reestablishing her reputation in Denver.

But Logan Stonestreet is persistent—he didn’t become one of the best football players in the league by throwing in the towel at the first rejection. Something about Logan’s unwavering determination—and amazing body—keeps Gwen around, and soon there’s more that’s sizzling than just the steak on the grill. Things are getting more serious than either side cares to admit, and when Logan suffers a severe injury in the playoffs, they’re both forced to make game-time decisions. The perfect romance for football fans and foodies alike, Intercepting the Chef is a delicious read that’ll have you hooked until the very last play.

Intercepting the Chef is the first book in Rachel Goodman’s new ‘the How to Score Series’. This is also the first book I’ve read by this author, so going in I didn’t know what to expect in terms of writing and story development. The story pleasantly surprised me; I really like the characters and the journey they make.

“You can’t spend time worrying about the what-ifs or the what-could-have-beens. True happiness is achieved from cherishing what you have, not having it all.”

Gwen Lalonde is back in Denver, the city she left to become a chef. After the breakup with her boyfriend (and boss), she had no other choice then to return home, to start all over. Cooking has always been her passion – thanks to her chef father – and Gwen is very good at what she does. Too bad the industry is dominated by men, and not all take her hard work serious, even take it for granted. Unable to find a position at an upscale restaurant, Gwen starts working at Stonestreet’s, a new restaurant owned by a famous NFL star. Gwen doesn’t have time for love, isn’t even thinking about it, but Logan is a bit hard to ignore.

“Overstepped your bounds?” Logan asked with a sly grin that killed my anxiety and stirred something else entirely warm and deep in my belly. “Wasn’t aware you’d ever played by the rules, Gwen.”

Logan Stonestreet is the star quarterback of the Blizzards and has been with the team since he got drafted. The Super Bowl is still on his ‘to-do’ list, but Logan is slowly starting to think about activities besides his beloved sport. His late mother was a great cook, and to honor her memories he decides to open a restaurant, where people can eat simple, tasty dishes. Logan’s life is busy enough as it is, with all his obligations, but he can’t shake the feelings he starts to have for his executive chef. He senses she wants him as well, but she doesn’t want to give in.

“No flowery perfume or hair so overdone I was afraid to mess it up. Everything about Gwen was organic, tempting, and what I’d been missing all these years. I was screwed.”

Logan and Gwen are both people passionate about their jobs; football and food. Logan isn’t looking for a woman, but he’s open to the idea of falling for Gwen. Gwen on the other hand doesn’t want a relationship. Not in the foreseeable future and certainly not with the man she works for. After all, she’s still dealing with the aftermath of the breakup with her ex. However, feelings can’t be denied, and soon Gwen and Logan start something. They try to keep it light and casual, but from all sides comments are made and not everybody is happy with them being together. But this is a Romantic story, so Logan and Gwen ending up together is a given fact.

Intercepting the Chef is my very first book by Rachel Goodman, and I like her author voice. Gwen and Logan are lifelike characters with realistic responses to what life throws at them. Some side characters have other interests then the couple’s growing relationship, but most of all it’s the story of two people trying to figure out a life and relationship that works for them. The one thing in Intercepting the Chef that didn’t work for me where all the details about Logan’s football and Gwen’s cooking. I get that their profession is a big part of their lives, but I wanted more of them spending time together (not just the sexy part).

“My whole life I’ve been searching for purpose, for a place where I felt settled yet still free, and it took coming home for me to understand that passion and love don’t have to be mutually exclusive.” A flush colored her cheeks as she intertwined our fingers. “I love you, Logan, and that scares me most of all.”

I love the story of Gwen and Logon, I give Intercepting the Chef 4 stars.