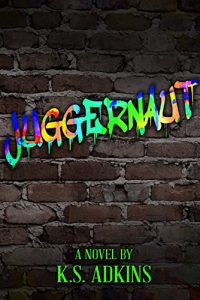 1. A literal or metaphorical force regarded as mercilessly destructive and unstoppable
2. Any terrible force, especially one that destroys or that demands complete self-sacrifice

In other words, me.
I truly was a dancing, singing, man-plowing, alcohol-guzzling, human wrecking ball of fun.
With a reputation for chaos so legendary, I made a career out of it.
Men came (pun intended), men went, but as long as I had my girls and Sunday brunches, I was solid.
I didn’t need a man to complete me. Hell no, I was in total control of my destiny.

But see, that’s where I went wrong.
I challenged the universe.
It accepted by sending a man who knew my weaknesses.
All it took was lemon drops, one kiss and a wish.
By granting it, I doomed us both.
No mortal man could handle my kind of destruction forever.
Even if he begged for it.
I was called Juggernaut for a reason.
In my case, be careful what you wish for was very, very, literal.

He really should have listened…

Juggernaut is my very first book by K.S. Adkins. Since I’ve read it a month ago, I’ve pick up some of the author’s other books, and I can now tell you Juggernaut is different from her normal books. It’s much funnier, I would even call it a Romantic Comedy. And the best part? Lots of the funny scenes throughout the story actually happened to the author or her friends (no, she doesn’t tell who did what…). I love Juggernaut, a story about love, not only for your guy but also for your best friends.

“I refused to be categorized. Stuffed in a box. Stifled. I lived for granting wishes and epic fuckery. I didn’t do regret, wear cheap underwear, or drink bad liquor—boxed wine withstanding. For me, life was grand. And I wasn’t looking for a change.”

Taylor loves her life. She loves her work as an event planner and her free time she spends with her three best friends. They’ve named their tight group ‘The SHIT’ years ago (after their initials) and now they’re getting close to 40 the girls still love to party and unleash their inner bad-asses. Especially Taylor, who wears the nickname Juggernaut with pride. All in all, Taylor doesn’t need a man to complete her, she can take care of herself and when she needs to she can hook up with a cool guy. But deep down Taylor wants a Mister Right… Too bad she already knows him and that he doesn’t like her at all.

“He had a way about him that screamed confidence and authority. Unfortunately, this came with a you’re beneath me aura, too. While he was gorgeous in a GQ sort of way, he appeared to have the personality of a paint sample.”

Evander is the opposite of Taylor; he’s in control and doesn’t let himself go easily. Meeting Taylor has been an eye-opener for him. She’s completely different from his usual choice of women, but he can’t get her out of his mind. Evander is a confident man, but around Taylor he seems to turn stupid and doesn’t know what to say. With the help of some meddling best friends he finally goes after her. But Taylor isn’t easily convinced…

“Until her, I thought I knew what kind of woman I wanted; since her, I know no other would do. Because in my eyes, she is perfect for me. At thirty-nine years old, everything about her made it clear she was forever young at heart.”

Taylor and Evander have known each other for some time now, but they don’t talk. Taylor thinks Evander is an arrogant ass and Evander… Well, he seems to be a bit intimidated by Juggernaut Taylor. But when they finally start talking, it turns out the other person is more normal than expected. Although they’re so different, Taylor and Evander just work. Both are a bit older and know what they want in life, there’s no place for girly insecurities and teenage drama (for the most part). I just love this couple!

Juggernaut is much more than just the story of Taylor and Evander finding their happy. Yes, their building relationship is a major part of the book, but it’s also very much about friendship. I love Taylor and her small group of friends. They have each other’s back and help out where they can. Ok, meddling is a part of it too, but who doesn’t want the best for the people they love? I love the author’s no-nonsense writing style and the voices she gives her characters, it feels real.

“While I’ve never claimed to know it all, I do know that some women weren’t meant to be tamed. Some need to run free. That kind of woman needs a man just as wild to run beside her. That woman is Taylor. And that man is me.”

I love Taylor, Evander and their story, plain and simple! I give Juggernaut 5 stars.