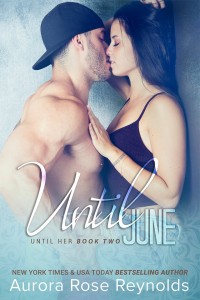 June Mayson and Evan Barrister’s whirlwind courtship resulted in a secret marriage right before he left for boot camp. Evan knows deep in his gut that June is too good for him, but after getting a taste of the beautiful life they can have together, he’s unwilling to let her go. June promises to wait for him, knowing neither time or distance will ever change her feelings for Evan—that is until she’s served with divorce papers while he’s overseas and she’s forced to let him go.

Her marriage and divorce a well-kept secret, the last person June expects to run into when she moves back to her hometown is Evan. Angry over the past, she does everything within her power to ignore the pull she feels whenever he is near. But how can she ignore the pain she sees every time their eyes meet? How can she fight the need to soothe him even if she knows she’s liable to get hurt once again?

Is it possible for June and Evan to find their way back to each other again? Or will they be stopped by an outside force before they ever have a shot?

June Mayson is a sweet young woman. She just moved into her own house, but she’s still very close with her sisters, parents and other family members. Three years ago she did something very out of character; after a whirlwind courtship she married the man of her dreams, without telling anyone. Even when her heart broke when said marriage ended in an unexpected divorce, she still didn’t tell a soul. To her disbelieve, she finds her ex-husband in her hometown, working for her cousin Jax. All the feelings she had for Evan are still there, and come right back to the surface.

“Not again. I did that when he went away. I did it when he had his mom deliver divorce papers to me, too. I died inside when I knew there was no longer an us, and I just fricking finally got myself back. So no way will I allow him to stop me from moving forward with my life.”

Evan Barrister is a somewhat damaged man. Being in warzones due to his military career, he has seen things and lived through attacks that can change a man forever. Combine that with his less fortunate childhood, he thinks he is not worthy of love. When he met June a short time before going to boot camp, he fell for her right away and married her as soon as possible. Seeing the horrors of war himself changed him, made him rethink everything, including his marriage to June. Divorce was the only option in his mind, but seeing her again after all this time makes him question himself again.

“I knew the second I met her there was something different about her, something I couldn’t put my finger on, but I knew she was going to become important to me. She wasn’t important—she was fucking vital, the best thing that ever happened to me. But then I had to let her go so my fucked up didn’t ruin her.”

Meeting again after three years is hard on both June and Evan. Evan didn’t want to give up on June but felt like he had no other choice – June didn’t get an explanation for the divorce, just was served divorce papers. But after some talking and a little back and forth the couple is together again, giving their relationship a second chance. Evan is one dirty talker with a dominant side, June doesn’t stand a chance. Together they are hot, sweet and it’s clear they belong together.

From the moment I’ve read about June and her secret marriage in Until July, I wanted to read her story. And very sadly, it doesn’t live up to my expectations. I’ve expected more… More talking, more feelings, more explanations. But instead it is whirlwind courtship 2.0 all over again. I feel June and Evan fell back into each other’s lives again to easily, they don’t really talk about their issues – especially Evan’s. Yes, they have very hot sex – I love a dirty talking, dominating Alpha – but for this couple I personally wanted something different; more words, less sex.

“Home,” I growl, looking into her beautiful eyes. “You are my home.” I slide out then back in, burying my face in her neck and my cock deep. “You’re my home,” she whispers into my ear. “I love you.” “I love you too, beautiful.”

I’ve wanted to love Until June just as much as the original Until series, but unfortunately I can’t. Due to my issues I give Until June 3 stars.

~~ Until June was provided in exchange for an honest review ~~