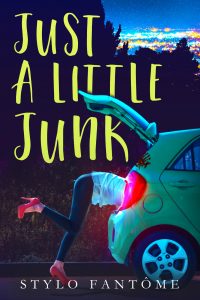 Jodi Morgan is having a bad weekend.

After partying a little too hard, she wakes up with a monster hangover and almost no recollection of the night before. So imagine her surprise when she looks in her trunk and instead of finding a spare tire, she finds the last guy she'd danced with before blacking out.

When her older brother's best friend offers to help, things start looking up. They've known each other since she was thirteen, and ten years later, he still treats her like a little kid - surely, committing felonies has to trigger some sort of spark. Together, they wind up going on an adventure that takes them all over Los Angeles. From raves to penthouses to strip clubs. All in the search for the answer to her question.

Who is the dead guy in my trunk!?

I know Stylo Fantôme for her stories that are on the raw side; there always happens stuff I’m not totally comfortable with, but I can’t not read it (does that make sense?). Just a Little Junk is totally different from the author’s other work. Yes, it’s not all easy-peasy, but the story is almost comical with a rough edge. I love it.

“I need your help.” “I’ll change your tire later.” “It’s not a flat tire. Come outside.” I really don’t want to -” “Just come outside.” “Jo, if it’s another dead raccoon, I will make you wear it as a hat.” “JUST FUCKING COME OUTSIDE!”

After a wild night, Jodi is completely shocked to find a dead body in her car. She does remember partying with the guy, but how he ended up in her truck, she has no clue. Instead of going to the police, she goes to Archer for help. Together they a. try to find out what happened, and b. come up with a solution for dead dude. The fact they’re crushing on each other isn’t very helpful.

“She hadn’t realized how close they were to each other and she was startled to see his eyes had taken on a mossy green hue, with brown flecks around his pupils. You have a dead body in your trunk, stop thinking about how hot Archer is.”

Jodi and Archer are good friends and neighbors, but they go way back. Growing up, Archer was best friends with Jodi’s older brother, but since he left to pursue his basketball career, Archer and Jodi got close. Both have a crush on the other, but Jodi thinks Archer doesn’t think of her that way, and Archer has put an ‘off-limits’ sticker on Jodi. But spending so much time together with a dead guy in the trunk of Jodi’s car and all the craziness that follows changes everything.

I love Jodi and Archer. They are young people with crappy jobs doing their thing, living a normal life. But finding dead dude sets of a whole series of events that are not normal. It’s over-the-top, it’s hilarious and it’s like you’re watching some crazy movie, I enjoy it very much. Normally the author’s characters make me a bit uncomfortable with their actions, but Jodi and Archer are almost sweet together. I really like them, and their crazy, fast-paced story.

“You’re in love with me,” she pointed out. He swallowed thickly and nodded. “I did. You said it, too,” he reminded her. She nodded, as well. “I must be in love with you. Completely, stupidly, suicidally in love.”

Just a Little Junk is very Stylo, yet it’s very different. I give this story 4 stars. 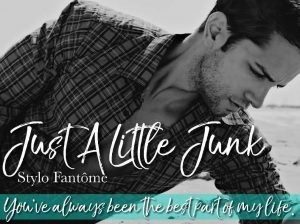