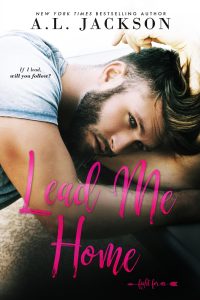 My sister disappeared. That day I was selfish. That day I chose myself over her. And that day, I lost everything.

She’s the girl I’ve loved my whole life. She’s gorgeous. Caring. Every single thing I’ve ever wanted but denied myself. She was my sister’s best friend, and I destroyed any chance of keeping her.

When her safety is threatened, I have a second chance to do the right thing. But as soon as she moves in, I want her in all the wrong ways.

All it takes is a brush of her hand, and I’m losing all control.

The fire between us is only burning hotter.

But neither of us saw what was coming.

And it just might be Nikki Walters who destroys me in the end.

How much hurt can one man take? Does it keep him from finding love, or has he found it already, a long time ago? Lead Me Home tells the emotional story of Ollie and Nikki, who have known each other since childhood. I love how Ollie finally sees Nikki for what she really is, his forever.

Ollie and Nikki go way back, they meet as young kids and together with Ollie’s sister Sydney they share an inseparable bond. As they grow older, the friendship between Nikki and Ollie starts to shift into something different. They’re too young to understand it, but they’re falling in love. One night however, everything changes. Sydney disappears without a trace, leaving her brother feeling guilty and hurt, and her best friend devastated.

Fourteen years later those wounds still haven’t healed, and the friendship/young love Ollie and Nikki had, is gone. When Nikki faces a threatening situation, Ollie no longer can look away and goes into protective-modus. Spending time together makes our couple finally work through their feelings, and maybe they do have a second-chance after all.

“My thumb traced along her cheek. Right over those freckles that made her appear so sweet and a little untamed. She was. But she was more. So much more.”

Ollie blames himself for not looking after his sister, and to this day he’s still searching for her, wanting to find her. He keeps Nikki at a distance is for her own sake; he doesn’t feel good enough for her, and she reminds him so much of his sister. Nikki is still in love with Ollie after all those years. She tried to move on, but no one compared to her Ollie, and honestly, she doesn’t want anyone else. Both are in pain, and I’m so happy Ollie gives into his feelings for his Sunshine (feelings he so obviously has)

Like other books by A.L. Jackson, Lead Me Home is an emotional story; two tortured souls who clearly belong together, but fight it all the way. And the story of Nikki and Ollie is extra emotional, given their past and what happened to Sydney. My heart breaks for both Nikki and Ollie. Nikki lost her best friend, and Ollie his sister. And that’s not all they lost, they also lost each other in the aftermath of Sydney’s disappearance. The ending of the story is perfect, I’m so glad Nikki and Ollie have found their so much deserved Happily Ever After.

“His lips brushed against mine in the softest kiss. “Sunshine,” he murmured like praise. “You are light and life. My life. My everything. Let me be yours.” 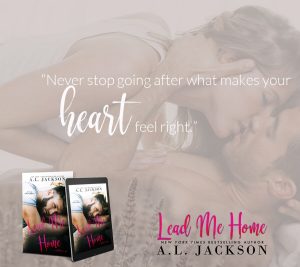 My heart rose higher in my throat with every pound on the wood. It was as if an accelerant had been poured directly into my blood.

It was close to two in the morning.

Someone showing up at this time of night—in the middle of a downpour, no less—should make me cautious.

If I searched myself, I guessed a little part of me was afraid, but only because I was sure of who was on the other side of the door.

Dangerous to my sanity.

Dangerous to my heart.

Obviously, none of that mattered. I was drawn to him anyway.

Nothing more than an offering.

I hoisted up on my tiptoes to peer through the peephole, and I sucked in a breath when I saw the tortured face pleading back.

So gorgeous in its hardened, chiseled way. Wind gusted through the longer pieces of his dark-blond hair, his shirt soaked and clinging to his massive body from having to make his way through the deluge that pummeled at the roof.

Quickly, I worked through the lock and yanked open the door.

All brought on by the sight of him.

“Ollie,” I whispered, my spirit in an uproar.

He staggered in with a half-drained bottle of scotch clutched in his hand and kicked the door shut behind him.

He dropped the bottle to the carpeted floor, and there was no time to contemplate the thud before he was stalking my way.

A burly, beautiful, beast of a man.

I took a startled step back, sucking for the air his presence had stolen. Energy streaked through the room. Those big hands darted out and captured my face in the same second his mouth captured mine.

Lips and tongue and searing heat.

My head spun and need blistered across my skin.

He groaned in misery and released the words between the manic scourge of his mouth. “I need you, Nikki. Need you in a way I haven’t needed anything in all my life. Take it away. Fuck . . . please take it away.”

One Response to “Book review: Lead Me Home ~ A.L. Jackson”