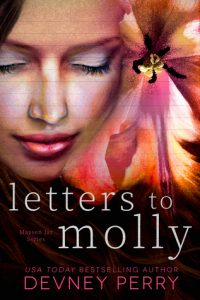 I received this book from the PR company in exchange for an honest review. This does not affect my opinion of the book or the content of my review.

Molly Alcott didn’t expect to open her mailbox one summer morning and find an old letter stuffed between bills and a supermarket flyer. Penned in familiar handwriting, dated over fifteen years ago, the letter was written to Molly after her first date with the man she’ll never forget.

Week after week, new letters appear. Each marks an event in the history of their epic love affair. Each heals a wound. Each holds the confession of the man who still owns Molly’s heart.

The letters are full of promise, hope and love, but truth be told, Molly wishes she could unread them all.

Because the man who wrote these letters is not the one sending them.

Two broken hearts, a broken family and a lot of things unsaid. Can two people who still have feelings for each other overcome a divorce? Letters to Molly tells the story of Finn and Molly, who used to be married, and who are trying to move on from all the hurt. I love this second-chance story.

Finn and Molly had everything; a loving family, a successful business, and most importantly; each other. That was until real life took over, and both made bad decisions that caused the breakdown of their once so strong marriage. Fast forward six years, and Molly and Finn are kind of okay with their current situation. Being parents to their kids while keeping a personal distance to each other. But since true love can’t be ignored, Molly and Finn are giving it a second chance. Even if it means talking about their past and what went wrong. Some unsent letters from Finn to Molly play an important role.

Oh oh Molly and Finn. I want to hug both of them, and at the same time I want to lock them in a room to make them talk. Well, that should have happened years ago, and maybe things wouldn’t have turned out so badly. Molly is a sweetheart who blames herself for her failed marriage. Yes, she drove the ‘final nail in the coffin’, but she wouldn’t have done so if Finn had acted differently. Finn had good reasons for working as hard as he did, but the end result wasn’t what he had in mind. It’s very clear that Finn and Molly still love each other, and I’m so happy that they are back together.

I loved the Birthday List, but the whole Molly and Finn side story left me a bit unsettled. When I learned that they were getting their own book, I was thrilled. And Letters to Molly totally lives up to my expectations. Finn and Molly both have to learn to deal with their painful past, to forgive the other one and to see their own role. And that isn’t an easy thing to do. But true love is worth everything, and Molly and Finn take their chance.

“We’d never go back. We were all in, taking this journey together. Taking another chance on one another.” 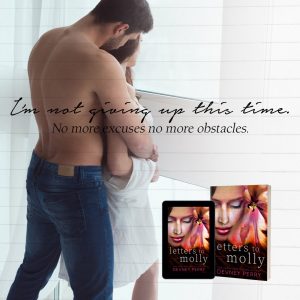