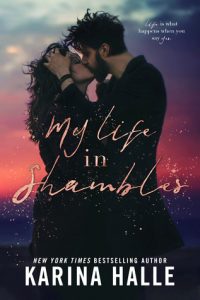 When Valerie Stephens made the resolution to say yes to new adventures, she never thought she’d end up in the tiny town of Shambles, fake engaged to one of Ireland’s top rugby players. But there’s a first time for everything.

After my boyfriend broke off our engagement, I lost my apartment, and was laid off from my job, I can definitely attest to that.

They also say life is what happens when you say yes to new adventures.

So when my two sisters invited me to ring in the new year in Ireland, I decided to throw all caution to the wind and go for it. I was going to let “saying yes” be my new resolution.

Little did I know I’d spend New Year’s Eve having a hot and dirty one-night stand with Padraig McCarthy, one hell of a sexy Irishman. I also didn’t know that the brooding and intense sex god was one of Ireland’s top rugby players.

A rugby player with a proposition for me:

Come with him to his tiny hometown of Shambles and pretend to be his fiancé for a few days, just so that his ailing father can have some peace of mind.

It was anything but.

Not when a town gets up in your business, not when the media hunts you down, not when your past comes back in the picture, not when there are real hearts and feelings at stake.

Not when there are secrets that could break you.

They say life is what happens when you say yes to new adventures.

This is my life in Shambles.

Breaking up with your fiancé and losing your home and job in a short time. How do you get over that? My Life in Shambles tells the enchanting story of Valerie, and how she meets her Padraig. I love this couple, they’re just perfect.

“The rest of the world fades away and I know when it comes back into focus, everything will be different.”

Valerie is at crossroads. Her old life is pretty much gone (fiancé, home and job), and she has to figure out what her next step will be. But first, it’s time for a spontaneous trip to Ireland with her two sisters. Valerie is still licking her wounds, but when she sees Padraig, she can’t stop looking. Padraig is well-known rugby player in Ireland. He loves the sport and the perks that comes with it, but lately he’s rethinking his life. Valerie and Padraig are both not looking for love, but there is something between them that deserves to be explored.

Valerie is my kind of girl; she’s sweet, loyal and kind, but she stands her own ground when needed. I felt sorry for her, she thought she had her life pretty much planned out, until everything went the wrong way. Padraig is in a rough spot as well, his future is about to change, and he doesn’t know what to do. Valerie and Padraig find that special love in each other were most of us are looking for and give each other the support they need. I love them for each other.

A Life in Shambles is my favorite kind of romantic story; a lovable leading couple, a realistic story-line and no over-the-top craziness. That doesn’t mean Valerie and Padraig have an easy road to their Happily Ever After, but they work through their ‘issues’ like real-life people. The story is told from a double POV, so you understand the couple’s actions and reactions. And Padraig’s Irish voice? I think I’ll have my hubby take an Irish language course or something like that….

“I stand there holding him and he holds me and the rest of the world does its thing whenever the two of us are together. It just dissolves. Until it’s just us.” 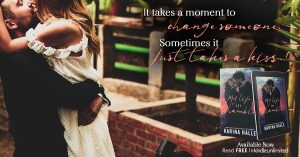 Book review: The Dark of the Moon ~ E.S. Bell