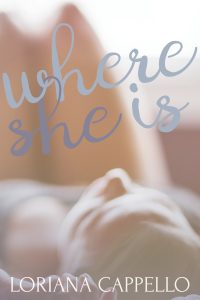 The breakdown of any relationship can be devastating. For me, it’s life changing.
My name is Hannah May, and I’m leaving London and everyone I love in pursuit of something more.
A major job opportunity has landed on my lap. The timing couldn’t be better, and the location means a fresh start in a new country. Australia.
My flight to the other side of the world is made with just one promise to myself.
This journey is about me.
My life, my career, my heart.
Never again will I fall so quickly…

I have demons to fight. Losing my wife in the way I did, is just one of them.
My name is Daniel Grant, Executive Director at one of Australia’s biggest construction companies and the gossip columns favourite piece of meat.
I’ve made so many mistakes, more than I care to admit.
The next woman I let into my life will be the right one.
The next woman will be Hannah May.

A note to readers. Where She Is, is written in UK English and has been edited/proofread according to UK grammatical rules. As a result, some spelling and grammar variances will be apparent in the text, and are normal.

One of the things I love about reading, is discovering new authors. Sometimes their work isn’t the best I’ve read, and other times debut authors blow me away. Where She Is is the debut book by Loriana Cappello and I love it. Yes, it has some clichés, but her author voice is amazing.

“Tell me you don’t feel something.” “Yes. I do.” He has no idea how much. He whispers. “Can you feel it now?” I nod and take in the feel of his thumb brushing over my hand. For a moment, we are the only people in the room.”

Hannah isn’t very lucky in love, she always seems to pick ‘mister wrong’. When her relationship with her current boyfriend ends in disaster, she accepts the job offer from her employer and moves to Australia. Starting over in Australia is not just a job opportunity, Hannah also sees it as a chance to reassess her love life, to stop making the same mistakes over and over again.
Meeting Daniel isn’t part of the plan. Well, he is one of the directors of the company she works for, so meeting him comes with the job. But falling for him? Hannah can’t stop her feelings for the man.

“Am I forgiven?” I pull away slightly. “Forgiven for what?” “For taking what I wanted without asking.” “I don’t know what you mean?” “I told you I wanted to kiss you today. I just took what I wanted”.

Where She Is is Loriana Cappello’s first book, and I’m very pleasantly surprised. I love how she writes her characters and surroundings. The story is mostly written from Hannah’s POV, and through her eyes we see everything happen. Daniel’s thoughts are small snippets throughout the book, and give an inside into his POV on key-moments.

As already said, Where She Is has quite a few of clichés, but for once I’m not bothered with it. All though they come with a bit of drama, it doesn’t take away from Hannah and Daniel’s story. Hannah is a young woman who’s open about her past, but it takes some time for Daniel to open up about his life. And I understand him. He’s a new man now with a different mindset, he doesn’t want Hannah to know about the sordid life he led. I love Hannah and Daniel together, they’re a sweet couple who belong together.
Besides a great leading couple, Where She Is has the perfectly disturbed female villain in the form of Freya. I can’t wait for her story which will be told in Secrets, I want to know what drives her.

“You make me tick, help me breathe and fill my world every day with a life worth living and an ocean of love. I can’t function without you. I’ve said it before and I’ll say it again. You’re it for me, Han. You’re it.”

I love Where She Is, I give the story of Hannah and Daniel 4.5 stars. 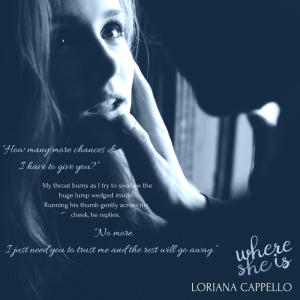 Tags Book blitz, Loriana Cappello, Review, Romance, Where She Is