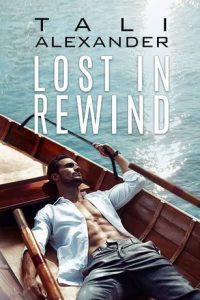 Inside every story lies more than one truth.

“Come, boy, I will give you a reading…show me your hands.”

Jeffery Rossi wants to be a man of logic but finds himself basing his life’s decisions on a prophecy delivered at the hands of an old gypsy fortuneteller. The death of his beloved wife coupled with the loss of what he thought would be his carefully crafted future, have spun him onto a path of self-destruction.

“Three children will come from you—a king and two queens.”

Jeff believed he knew how his future would unravel, but he’s about to get a lesson in how the Universe works. Fate should not be left to the interpretation of mere mortals. Interfere and suffer, surrender… and let the fates help you find your destiny.

“No matter what you do, no matter how far away you run, what’s written in the stars cannot be undone.”

Last year I’ve read Love in Rewind, the first book by Tali Alexander. I loved the book, so of course I read the next book in the series. The second book told the story of Sara and Liam, but it also told about the complicated relation Sara had with her former lover Jeffery. Lost in Rewind gives us his story and explains the complicated affair.

“My wife left me the key inside her letter and commanded me to be the man she married and go after and fight for what is rightfully mine. I was supposed to bring my family back together and set my life to music. But I lost them both and now all I hear is silence.”

Jeffery is a troubled man; he has lost his wife and the love of his life is finally happy with another man. For years he has been torn between duty and love, and with everything crashing down now he is just lost. Trying to make sense of it all, to find the strength to go on, Jeffery needs answers to his questions. And for this questions, Jeffery needs to go back where it all started; a pub he visited while he was in university. He doesn’t find what he’s looking for, but he does find a young woman who seems strangely familiar, a woman he can’t stay away from.

“She looks up to give me a small smile, and I pull her close again, resting my chin on her head. Embracing her feels as natural as breathing, and yet we know nothing about each other.”

Kali is a lonely woman living in Providence. Five years ago she moved to the United States to spend time with her grandmother, but since her death all she has is her work and her employees. She isn’t sure what to do with her life at the moment; staying in the States or to back to France, where her father lives. When Kali meets the older Jeffery she doesn’t know what to make of him; he seems to know more about her grandmother and she feels strangely attracted to the unknown man.

“I’m suddenly hyperaware of everything: the ticking sound of the clock, the hum of the ceiling fan, even the air has a taste. The peculiar color of this man’s eyes makes me feel like I’ve been here before. I’ve lived in this point already. Déjà vu.”

While both Jeffery as Kali aren’t looking for a relationship, they both can’t deny the attraction between them. After a confusing and explosive first meeting Jeffery and Kali keep spending time together, but both keep secrets for each other, or decide not to tell the whole truth. Especially Jeffery has a lot going on; the death of his wife, the loss of his lover and the care for his children. It’s all very complicated and it takes a lot of his time. When he finally has figured out what he wants, Kali is gone. Knowing she is the woman for him, Jeffery – with the help of friends and family – does all he can to find her and convince her of his love.

Lost in Rewind is told in a dual POV, but it’s mostly Jeffery’s story. His acceptance of his past, how he has hurt two women and how he wasn’t fair to either of them. Deeply believing in the future predicted by a fortune teller has shaped Jeffery’s decisions, making him blind to other options and the feelings of the other people involved. I was shocked by Jeffery’s actions described in the previous book in the series, reading his side of the story changes that a bit. Still, he was a very selfish man who took what he wanted, without really thinking of the feelings of the two women involved. I’m glad he sees the wrongs of his actions and how he wants to be a better man.

“I have been saying your name before I even knew it belong to you. You were written into my future decades before I could even understand what love was. I’ve been lost navigating through this life, not understanding what I’ve been searching for, not knowing I had to find you.”

Although Jeffery isn’t my favorite book hero, I love his story. I give Lost in Rewind 4.5 stars.

~~ Lost in Rewind was provided in exchange for an honest review ~~