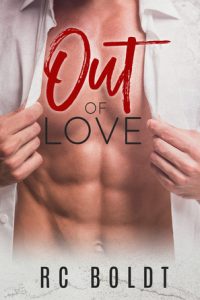 Foster Kavanaugh, former Navy SEAL, knows what it’s like to be the top dog, the man in charge, the one calling the shots. Now that he’s running his own security consulting firm, not much has changed.

Except the curvy blonde he hired as his office manager.
Noelle Davis has been through the damn ringer. Swearing off men after escaping a toxic relationship, she’s grateful for a fresh start—new job included. Except her job isn’t tranquil and calm. In fact, it’s quite the opposite because her boss is the most infuriating man on the planet.

And, not to mention, sexy as hell.
Foster has limits. Rules. No attachments allowed because he doesn’t do love—and Noelle Davis foiled that plan and took a red pen to his list of rules. With her smart mouth and quick witted banter, he found the woman beginning to creep past his defenses.

When circumstances put Noelle in a perilous position, the first person to come to her rescue is none other than Foster Kavanaugh. She gets to see the man in action—not as her aggravating boss, but the man who will stop at nothing to keep her safe.

The same man who makes her want to reconsider her self-imposed embargo of men.

The man she wants to get to know now that she’s seen another side of him.

The man who makes her want…more.

But is more possible when you're OUT OF LOVE?

Out of Love is the newest book by RC Boldt. Like other books by this author it contains a great leading couple and a group of friends and family as secondary characters. Out of Love tells the story of Foster Kavanaugh, who we’ve met briefly in ‘the Teach Me series’ by the same author. This book can be read as a standalone, but I’m glad I have some background information since I read the other series not so long ago.

“I think about her. I think about Noelle Davis and what it would be like if I were that guy. If I were good enough for her. If I didn’t have a past haunting me.”

Foster Kavanaugh is a former SEAL who now owns his own security firm. On his payroll are all former military guys who share his believes and ethics. Foster has seen a lot throughout his military years, things that can alter a man for good. Since he doesn’t do love and commitment, Foster spends his nights with hookups when he feels the need. But lately Foster can’t stop thinking about a certain woman, his office manager Noelle. He knows he’s no good for her (or so he believes) but he can’t stay away.

“I know the facts:
1. Noelle is off limits as my employee.
2. You never shit where you eat.
3. Noelle is worth her weight in gold since she helps run our office more smoothly than it ever has.”

Noelle Davis has started over. After her last boyfriend turned out to be a sociopath she moved away with the help of the few friends she had left. She enjoys working for Foster and the banter between them, but Noelle starts to see Foster as more, more than just her boss. And that is something she doesn’t want since she knows all about his way with the ladies and don’t forget.. He’s her boss.. But when her past catches up with Noelle, Foster is the first one she calls.

Foster and Noelle spend a lot of time together: they work closely to each other at the office and in the out of the office they share the same friends. When Noelle started working for Foster, he quickly found out she isn’t easily insulted and isn’t afraid of calling him out. And that’s how they fill their days; with friendly insults, funny banter and hard work. Foster and Noelle are attracted to each other, but don’t act on it.

All changes when a ghost from Noelle past comes knocking on her door. Foster’s protective side takes over and Noelle doesn’t even get the chance to say no. Slowly, Foster and Noelle begin a ‘relationship’, but especially Foster has a hard time wrapping his head around the idea he is what Noelle needs. This is a romance book so of course the couple sees the light and ends up together.

While Out of Love starts as a funny, easy read, it becomes more serious when Noelle’s past catches up with her. I was a bit upset with her for not telling Foster sooner what was going on; she knows she can trust him and security is his livelihood… Foster was a bit frustrating as well, it takes him a long time before he can admit he loves Noelle and that he deserves love, despite his past. At the moment, Out of Love is a standalone book, but the author has left some story lines open. I hope they will result in future books.

“Hey,” I whisper softly. “I love you.” “For real?” she whispers in return. “For real.” The brightness of her smile does something to me and I don’t think there’s anything I wouldn’t do to ensure that smile stays in place.”

I’ve enjoyed reading Out of Love, I give the story of Noelle and Foster 4 stars. 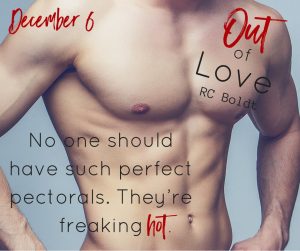