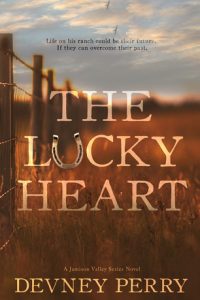 Life on his ranch could be their future. If they can overcome their past.

Felicity’s life story reads like the script to a bad soap opera. Girl’s high-school boyfriend becomes a drug addict. Girl falls for boyfriend’s best friend. Girl leaves them both behind only to return home years later for murdered ex-boyfriend’s funeral. Now she’s back home in Montana, ready to start fresh. She’s got a long list of amends to make and relationships to rebuild, including one with the man who has owned her heart for sixteen years.

Silas doesn’t need much. He’s got a great horse, close friends and the Lucky Heart ranch, but something has always been missing. He’s not an idiot. He knows the missing piece is Felicity. And now that she’s returned to Prescott, he’s got a second chance to win her heart. This time, the only thing standing in his way is history. Drudging up the past is going to be about as painful as playing tug of war with barbed wire. But if they can heal old wounds, he’ll get the girl he should have had all along.

From the moment I read about Felicity and Silas in the first book of the Jamison Valley series, I was curious about their story. To be honest, I was a bit disappointed that book two did wasn’t about them, but now Devney Perry finally gives us their story in The Lucky Heart.

“We used to be friends once. Maybe we could get back to that.” “Friends would be good.”

Years ago, there were two boys – friends – who fancied the same girl. The girl had feelings for both boys, but one asked her out first. The girl is Felicity, and as a young girl she’s in a relationship with Wes. The feelings she has for his best friend Silas are buried, she just sees him as a good friend. When all falls apart, Wes chooses drugs, Silas enlists in the army and Felicity runs away. In the present day – 16 years later – Felicity has returned to her hometown for good, and she and Silas have a choice to make. Just friends or finally admit their love for each other and build a life together.

“Those eyes would be my undoing. Even in the darkness I could make out their bright blue. I could go blind and still see them clear as day. Staring into their brilliance, I willed her to open up. To be honest with me about her feelings. To give me the chance to prove to her that I was her safe place.”

By moving away from Prescott, Felicity gave up on a life with Silas. I think she didn´t handle the situation very well, but she was still so young back then. She was sad, confused, everything. So, I forgive her for her actions. The grown-up Silas and Felicity? Well, I wanted to shake some sense into them. Everything could have been solved much sooner if they just had talked. Talked about the past, about their feelings, about everything. But that would have make a boring story, and I love how all played out.

The Lucky Heart is the third book in the Jamison Valley series, and like in the other books, the characters are very likeable. Silas is an Alpha guy (but not over-the-top) and Felicity is a sweet woman who finally deserves the happy life with the man she loves. While this is the story of Felicity and Silas, there´s so much more is going on in the book, it makes me curious for the future books in the series.

“Now what?” “Whatever you want.” “I want you to tell me that you love me.” I smiled. “I love you.” “I want you to kiss me.” I leaned to the side, bent down and brushed my lips against hers. “Anything else?”

I’ve enjoyed reading the story of Felicity and Silas, I give The Lucky Heart 4 stars.