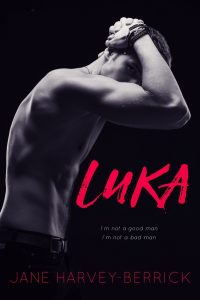 I'm not a good man.
I'm not a bad man.
But I've made some bad mistakes, made the wrong choices.
Who hasn't? But the consequences are tearing us apart.

Love makes you soar, makes you fly and sets you free—and then it lets you freefall until you're smashed and bleeding on the ground. Ultimately, love is the worst thing that can happen to a human being.

Im my opinion.
I love two people.
I love them differently.
One is a man.
One is a woman.
And they are brother and sister.

A couple of months ago I’ve read Slave To The Rhythm, the first book in ‘the Rhythm series’ by Jane Harvey-Berrick. Although the book told about the brutal reality of human trafficking, I loved the story and the romance between Ash and Laney, the main characters. One of the secondary characters being introduced is Luka, Ash’s best friend; a handsome, charming dancer who takes no shame in his sexual preferences. Luka tells us his story.

‘I’m not a good man. I’m not a bad man. But I made some bad mistakes, made the wrong choices. Who hasn’t? But the consequences are tearing us apart.’

From a young age Luka knows he’s different from the other boys in his family and neighborhood; he loves to dance and preform, and is attracted to both men and women. While he accepts this as being who he is, his parents don’t. After a brutal fight with his father he moves in with his grandmother and stays with her until he can live on his own. Dancing is Luka’s life; he loves the adrenalin, the music, to become one with the music. Over the years he has stayed away from relations, and never gets involved with colleagues. Due to his work schedule Luka is very close with Sarah, his dance partner. It’s obvious she has feelings for him, feelings he doesn’t have for her, but he loves her in an innocent friendly way.

“I don’t want to be your friend,” he murmured against my lips. “I want a lot more than that.” And then he left. I was stunned. But I was smiling.”

When Sarah goes abroad for a much deserved vacation, Luka moves into her apartment and meets Seth. He isn’t the type of guy Luka normally feels attracted to, but he feels comfortable around the man. Slowly, Luka and Seth start to develop a relationship, something Luka normally tries to stay away from. Early on the men find out Luka’s friend Sarah and Seth’s twin sister Sarah are the same person, but this doesn’t stop the growing feelings between them. Sarah’s return to England however, changes everything.

“Her blue eyes were so worried, so warm, I leaned in and kissed her on the lips. “I’m fine,” I breathed against her mouth. “We’re going to be fine.”

My heart hurts for Luka. Being kicked out by his parents because of his sexual preference was hard, but throughout his life Luka has to defend his orientation. Women want to ‘cure’ him, while gay men sometimes react very harsh on his bi-sexuality; therefor Luka doesn’t do commitment. Meeting Seth is an eye-opener, and Luka finally has a chance at the kind of loving relationships his friends have. But what could have been so good, turns into a nightmare in the blink of an eye.

“My heart lurched and I had to look away. Six weeks wasn’t long enough to forgive or forget. Maybe in time. Maybe. Maybe not.”

Luka isn’t the bad man he thinks he is; he is a good man in a bad situation, who tries the best he can and gives it his all. And that isn’t enough. My heart breaks for him; he doesn’t deserve to be ‘punished’ the way he is. Both Sarah and Seth live in a dream world, see only the things they want to see and react accordingly. And Luka is the one who pays the price for their actions. The fun, laidback man introduced in Slave To The Rhythm changes in this book, into a man who knows who he is and what his priorities in life are.

Luka isn’t the typical romance book I normally read, but I love it. I love Luka’s journey – even though it’s gut wrenching – and the small glimpses of his future. I give Luka 5+ stars.

~~ Luka was provided in exchange for an honest review ~~ 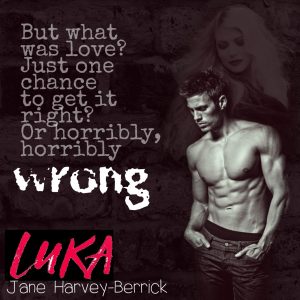