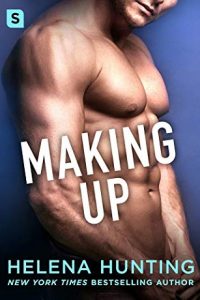 Cosy Felton is great at her job—she knows just how to handle the awkwardness that comes with working at an adult toy store. So when the hottest guy she’s ever seen walks into the shop looking completely overwhelmed, she’s more than happy to turn on the charm and help him purchase all of the items on his list.

Griffin Mills is using his business trip in Las Vegas as a chance to escape the broken pieces of his life in New York City. The last thing he wants is to be put in charge of buying gag gifts for his friend’s bachelor party. Despite being totally out of his element, and mortified by the whole experience, Griffin is pleasantly surprised when he finds himself attracted to the sales girl that helped him.

As skeptical as Cosy may be of Griffin’s motivations, there’s something about him that intrigues her. But sometimes what happens in Vegas doesn’t always stay in Vegas and when real life gets in the way, all bets are off. Filled with hilariously awkward situations and enough sexual chemistry to power Sin City, Making Up is the next standalone in the Shacking Up world.

Two people at very different stages in their lives. A good combination or not so much? Making Up tells the story of Cosy and Griffin, who live in totally different worlds, but who are not so different after all. I’ve enjoyed this sweet story very much.

Cosy is a student / adult toy store employee who’s living her life. Spending all her time on her study and her sometimes bit awkward job doesn’t leave her with much time for anything else. Love and men are not on her radar, not that she doesn’t want a boyfriend, but Cosy has met a few too many not so nice guys. Griffin is a bit older than Cosy and is living the life of a guy with money and a good career. Cosy thinks Griffin is a bit too old, Griffin is not so sure about a 22-year-old… But staying away from each other is not possible.

Cosy is a sweetheart who doesn’t mind hard work and late hours studying. She has a good plan, and she’s going for it. I admire her drive; she’s doing it all on her own, with little help of others. Griffin is a distraction, but a very welcome one. Griffin is a successful guy, but his latest relationship ended badly. If I were him, I would be so angry, but Griffin is a mature guy. Not that he isn’t hurt, but he also knows he will find love again. Cosy and Griffin seem like an odd match, but they are a great couple. I love them for each other.

Making Up is already the fourth book in the ‘Shacking Up Series’, and I love it. Like the other books it has funny moments that make you giggle, but also touching and serious moments. The story has a great leading couple, and the characters from the previous and future books in the series make their appearance. There is a bit of drama in the book, but since this is a romantic book, you know love will conquer all. I can’t wait for the other books in the series! 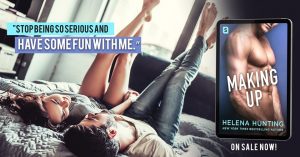 We’re a couple of minutes away from my apartment, which also means we’re almost at the end of our date. End-of-date protocol often means a goodnight kiss.

And I’ve eaten onions. Lots of them. What the hell was I thinking? I feel around in my shorts pocket, hoping I have a random stick of gum. I find a tiny square packet and pull it out, along with an old tissue. I shove that back in my pocket and sigh with relief as I carefully open the Listerine Pocketpak. There’s one strip left. I pop it in my mouth, wishing I had water since my mouth is dry and I’m suddenly super nervous.

Griffin pulls up in front of my apartment building. I swallow a bunch of times, trying to get the strip to dissolve on my tongue and glance out the tinted window, seeing it from his perspective. I don’t live in a bad part of town, but I sure as hell wouldn’t leave this car sitting out here for any length of time unless I wanted it keyed or stripped down.

Griffin shifts into park and turns to me, one hand resting on the back of my seat near the headrest. “I had a great time, Cosy.”

“Me too, thanks for dinner.” I tried to fork over my share, but he was quick on the credit card draw.

“It was my pleasure.” He leans in the tiniest bit, a nonverbal cue that he’s going in for a kiss.

I mirror the movement, giving him the go ahead. My stomach flutters in anticipation. I exhale slowly through my nose. Even though the Listerine strip should be doing its job to mask the onions, I don’t want to ruin the moment by breathing that in his face.

His fingertips skim my jaw, and I close my eyes. And then his lips brush my cheek. I wait for them to move a couple of inches to the right, but after what feels like a lot of seconds—and is probably only a few—I crack a lid.

Griffin is still close, a wry smile on his lips and a smolder in his eyes.

“Seriously, that’s it? A kiss on the cheek?”

His smile widens, making his eyes crinkle at the corners. He’s nothing like the guys I usually end up on dates with. College boys don’t take things slow. If I were out with one of the guys from school, I’d be sitting in a beat-up Civic with some stupid music playing, and he’d be all over me with his tongue halfway down my throat, copping a feel.

“I thought all the onions you ate were the equivalent to garlic for vampires.” Griffin fingers my hair near my shoulder. I’d really like him to finger something else. Wait. I mean I’d like to feel his hands on me. Not in my pants. Okay, maybe I’d like them in my pants, but not after date number one.

“I wasn’t thinking, and I really like onions. A lot. In hindsight, it’s not a great date food. I feel kinda dumb. And I guess at first I wasn’t so sure about you. How was I supposed to know you’d actually be kind of normalish?”

“Well, you drink club soda on purpose, so you can’t be all there.” I tap his temple.

Griffin circles my wrist with his fingers and drops his head, lips brushing over my knuckle. “We can’t all be perfect, now, can we?”

“I suppose not, and perfect is boring.”

“That it is.” He hums against my skin, and I feel it through my entire body. “I would like to try that kiss again, if you’re still interested.” 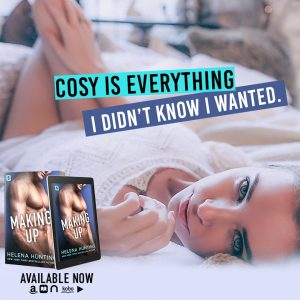