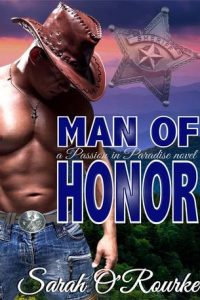 Sheriff Zeke Monroe loves one woman...Honor McKinnon. He is willing to stake his entire future on protecting her...no matter what the cost.

Honor McKinnon knows she is broken. Her body and soul had been shattered by a violent attack years ago, and no one...not her sisters or anyone else in the tiny town of Paradise, especially the Sheriff...can change that. Rather than dealing with her wounds, she chooses to protect herself from any further damage, even if that means that she avoids the one chance at love. But Zeke is determined to break down Honor’s walls...and to find the persons responsible for hurting her and make them suffer.

He’s already killed for her once...and is willing to do it again if it means she'll know safety and happiness.

What happens when Zeke refuses to allow Honor to ignore her past? Will Zeke’s love be passionate enough to break down her barriers? And can Zeke save Honor when her life is in danger once again?

A series that I enjoy very much is ‘the Passion in Paradise series’ by Sarah O’Rourke. The men are Alpha (a tiny bit over the top) and the McKinnon sisters are sassy, make their men fight for them. Throughout the books about the elder sisters, the horrific ordeal of the youngest McKinnon sister – Honor – is a returning topic, just as sheriff Zeke’s love for her. Man of Honor finally gives us their story and it doesn’t disappoint.

“We ARE worth all the tough days and lonely nights. We are worth fighting for.”

Honor McKinnon just goes through the motions of life. To the outside world she seems to do okay; she has a supportive family and town, and is a part-owner of a successful business. But her body and mind still carry the scars of a horrendous gang rape she survived as a teenager, Honor keeps seeing herself as broken beyond repair without having anything to offer to a man. During the day she can keep herself busy, but during the night nightmares take over, therefor she doesn’t sleep. For years Honor has known about Zeke’s attraction towards her, and for years she has kept pushing him away. But now she’s done fighting.

“I don’t know where all this will finally lead us. I can’t tell you that I can be what you want. I don’t know if I can. But I wanna try to be normal for you.”

Zeke Monroe doesn’t have many regrets in life. The one thing he does regret is not offering the then 16-year-old Honor a ride home, unknowingly setting events in motion that lead to the brutal rape that almost killed her. He always felt something special for Honor, but due to their age difference (he’s 15 years older) he stayed away until she was 18. From that moment on, Honor is everything to Zeke, even though she keeps pushing him away and makes very clear she doesn’t want him in her life romantically. But Zeke knows he loves Honor and that she’s the woman for him.

“Never tell me that you can’t feel like a woman in my arms, Honor,” he warned her softly, his eyes fiery as they moved over her face. “You can feel just fine, Kitten. You just burned bright for me.”

Honor and Zeke have known each other for a long time. Over the years, Zeke has made himself a steady fixture in Honor’s life; he’s always there for her, to help her wherever he can. Honor knows Zeke wants much more from her then just friendship, but the physical and mental scars she carries disgust her, so she thinks a friendship is all she can offer him. After a strange incident Honor accepts the help of her brother-in-law’s sister, and gets the psychiatric therapy she so desperately needs. With Aubrey’s therapy Honor learns to deal with her ordeal, and finally she and Zeke have a chance at their Happily Ever After.

From the moment I read about Honor, her brutal rape and Zeke’s devotion towards her in the first book of the series, I wanted their story. Zeke and Honor are a sweet couple; Zeke is very protective and caring towards her, always puts her needs first. Honor knows – inexperienced as she is – she loves Zeke, and wants to be better. Not just for her, but also for him. I understand some readers will not agree with certain steps of Aubrey’s therapy, but I agree with her. Both Zeke and Honor deserve a relationship based on love, not just because it feels safe.

Little rant. I love Honor’s family, don’t get me wrong, but I just couldn’t understand why they didn’t get her therapy sooner. Yes, the first doctor was a major idiot, but they should have searched for another therapist right away. No woman can deal with what Honor has been through on her own, without any form of treatment. And given how close they are as a family, I don’t get they didn’t see her drowning. Rant over.

“I love you, Honor, and whether we make love now or not, you will always be enough for me”

“You’re not just enough. You’re everything to me.”

Overall, I love the story of Honor and Zeke, the final book in ‘The Passion in Paradise Series’. But due to my issues with the family I give Man of Honor 4 stars.

~~ Man of Honor was provided in exchange for an honest review ~~ 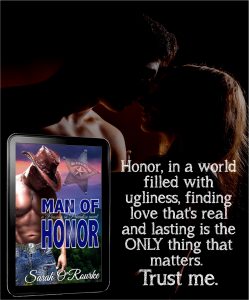