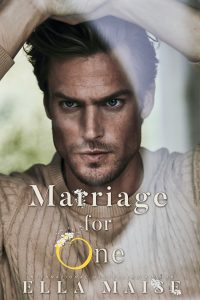 Jack and I, we did everything backward. The day he lured me into his office-which was also the first day we met-he proposed. You'd think a guy who looked like him-a bit cold maybe, but still striking and very unattainable-would only ask the love of his life to marry him, right? You'd think he must be madly in love.

Nope. It was me he asked. A complete stranger who had never even heard of him. A stranger who had been dumped by her fiancé only weeks before. You'd think I'd laugh in his face, call him insane-and a few other names-then walk away as quickly as possible. Well…I did all those things except the walking away part.

It took him only minutes to talk me into a business deal…erm, I mean marriage, and only days for us to officially tie the knot. Happiest day of my life. Magical. Pop the champagne… Not. It was the worst day. Jack Hawthorne was nothing like what I'd imagined for myself.
I blamed him for my lapse in judgment. I blamed his eyes, the ocean blue eyes that looked straight into mine unapologetically, and that frown on his face I had no idea I would become so fascinated with in time.

It wasn't long after he said I was the biggest mistake of his life that things started to change. No, he still didn't talk much, but anyone can string a few words together. His actions spoke the loudest to me. And day after day my heart started to get a mind of its own.

After all, I was Rose and he was Jack. We were doomed from the very beginning with those names. Did you expect anything else?

For me, marriage is about being married to the person you love most and who loves you, the person you build a life and a future with. Getting married for anything less, why would you do that? Marriage for One tells the story of Rose and Jack, who’s marriage isn’t based on love (that changes of course). I have enjoyed reading this sweet story.

“I was Rose, and he was Jack. We were doomed from the very beginning with those names. You know… the Titanic and all that.”

Rose thought she had it all planned out with a loving fiancé and her own business in the making. But the fiancé suddenly disappears and her plans for her own coffee shop come to a screeching halt due to an unforeseen event. Enter lawyer Jack with a very unsuspected solution to all her problems; being married to him. Rose is flabbergasted by the idea, but somehow Jack convinces her to say yes. Two strangers in a marriage, will it work?

“I kissed the edge of her lips first. They parted and the tip of her tongue swiped the bottom one. I released a breath. I was in so much trouble.”

Rose is a sweetheart with dreams about love and opening her own little coffee shop. Since Rose is a romantic girl, getting married to the cold Jack is totally out of character, but sometimes life forces you to do something drastic. Jack is a total workaholic with a bright future, who doesn’t make mistakes. And getting married to Rose, even if it’s just a business deal, might be a big mistake. Jack doesn’t do feelings, but slowly he falls for Rose, and he can’t stop thinking about her. Rose tries to hold on to the ‘it’s just a deal’ as long as possible, but her feelings for Jack change as well.

Marriage for One is a standalone story, told through the eyes of Rose and Jack. We get to know Rose quite well throughout the book, but Jack remains a wee bit of a mystery, I want to know more about him! Rose and Jack start out as strangers, but slowly they become friends, and then fall in love. I love Jack for Rose; however, I still want to punch him for his crazy idea. Yes, it was do for the right reason, but at the same time it’s a bit creepy. Not cool Jack! But luckily for him Rose doesn’t hold a mean grudge and she forgives him (but not to easily, you go girl!). Rose and Jack are a cute couple, and with everything out in the open they are perfect for each other. 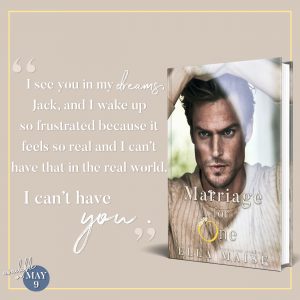 “Please face each other,” the officiant said, and I followed his instructions like a robot. Feeling numb, I let Jack reach for my other hand, and when his fingers gave mine a tiny squeeze, this time I met his questioning eyes. I swallowed, tried to ignore the little jump my heart gave and offered him a small smile. He was truly striking in a cold, calculating sort of way. I’d be lying if I said my heart hadn’t given a small jump the first time I’d laid eyes on him. Completely involuntarily. He had the strong-and-silent thing down pat. His equally striking blue eyes dipped to my lips and then came back to my eyes. When I felt him slowly push a ring onto my finger, I looked down and saw a beautiful wedding band with a half-circle of round diamonds staring back at me. Surprised, I looked up to meet his eyes, but his attention was on my finger as he gently rolled the ring back and forth with his thumb and index finger. The sensation was as alien as it could get.

“It’s okay,” I whispered when he didn’t stop playing with it. “It’s a little big, but it’s okay.”

He let go of my hand and the ring then looked at me. “I’ll take care of it.”

“There is no need to do that. This is fine.”

I didn’t know if Jack Hawthorne ever smiled. So far—the three whole times I’d seen him—I hadn’t been a witness to it, at least not a genuine smile, but I would have assumed if he was marrying someone he was in love with instead of me, there would at least be a small playful grin on his lips. He didn’t look like the grinning type, but surely there would be a hint of it. Unfortunately, neither one of us was the picture of a happy newlywed couple.

I reached for his hand to put on his wedding band, but call it nerves, clumsiness, or a sign, if you will—before I could even touch his hand, the cheap, thin ring slipped from my shaky fingers and I watched it fly away from me in slow motion. After the surprisingly loud clinking sound it made when it hit the floor, I ran after it, apologizing to no one in particular, and had to drop to my knees so I could save it before it rolled under the ugly orange couch. Although the light blue dress I had chosen to wear was by no means short, I still had to put one of my hands on my butt to cover myself so I wouldn’t flash everyone as I caught the damn thing before I had to crawl on my knees.

“I got it! I got it!” I yelled a little too enthusiastically over my shoulder, holding the ring up as if I had won a trophy. When I saw the unimpressed expressions around me, I felt my cheeks turn a bright shade of red. I dropped my arm, closed my eyes, and released a very long sigh. When I turned around on my knees, I noticed that my ringless, almost husband had made it to my side, already offering his hand to pull me up. After I got back on my feet with his help, I dusted off my dress. Looking up to his face, I belatedly noticed how stiffly he was holding himself—jaw clenched, the muscle tick definitely back.

Had I done something wrong?

“I’m sorry,” I whispered, thoroughly embarrassed, and got a curt nod in response.

The officiant cleared his throat and gave us a small smile. “Shall we continue?”

Before he could drag me back, I discreetly leaned toward my soon-to-be-maybe husband and whispered, “Look, I’m not sure about…you look…” I paused and released another long breath before gathering enough courage to look straight into his eyes. “We don’t have to do this if you’ve changed your mind. Are you sure? And I mean really, really sure you want to go through with this?”

His eyes searched mine as we ignored the other people in the room, and my heart rate picked up as I waited for his answer. As much as I was reluctant to do this, if he’d changed his mind, I’d be screwed six ways to Sunday and we both knew that.

“Let’s get this over with,” he said eventually.

That was all I got.