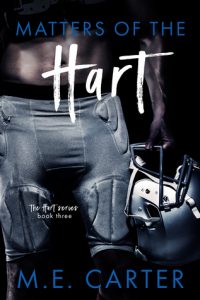 My name is Jaxon Hart.

From the second I laid eyes on Annika Leander, I wanted to help her. Protect her. Vindicate her. But she’s got baggage to get through. Hell, we both do.

A funny thing happens, though, when you finally connect with someone in a different way than you ever have before. The baggage doesn’t seem so heavy.

I suppose that’s really the only thing that matters when the heart gets involved.

What if the worst moment of your life, is also the moment you meet someone special? What would you do? Go back to your normal life, or listen to your feelings? Matters of the Hart tells heartbreaking (but also sweet) story of Jaxon and Annika, I simply love this young couple.

“My new reality is the two separate parts of my life…before last night and after last night. I’m only five minutes in, and the after is already proving to be harder than I expected.”

Jaxon and Annika don’t know each other, but both are hardworking students who take their studies and their futures serious. One moment however changes everything. Annika is horribly attacked, and Jaxon is the guy who comes to her rescue. And Jaxon can’t leave it at that; he needs to know she’s okay, that she will be alright. Slowly Annika and Jaxon become friends, and there’s a promise for much more.

“I like her. There’s something about Annika that calls to me. I could wax poetic and say she’s like a siren calling to me in the night or some shit like that. But it’s the truth.”

Matters of the Hart is the third book in the ‘Hart Series’, and is about Jaxon, the young kid from the two previous Hart books. It can be read as a standalone, but to get the full picture of Jaxon and his family the reading of the other two books might be handy (and the books are amazing). Matters of the Hart is told from a dual POV, giving both Jaxon and Annika a voice. Like the other books by M.E. Carter there are lots of hurt and emotions, but also a lot of love.

I loved Jaxon as a child in the previous books in the series, but grown-up Jaxon is an amazing guy. Yes, he has his own issues to deal with, but overall, he’s a smart young man who knows what he wants. Annika is a sweetheart, and my heart broke for her. She did nothing wrong, but she was just at the wrong place at the wrong time. Although this is a fictional story, the author has giving Annika and Jaxon (and the other characters) a realistic voice and lets them deal with the aftermath in a realistic way. I love Annika and Jaxon as individuals and I adore them as a couple.

“She doesn’t know it yet, but she’s it for me. It won’t happen soon. We’re not ready. But someday, certainly before medical school, I’m going to put a ring on her finger. And then I’m going to hope she’ll be ready to live in an apartment with me.” 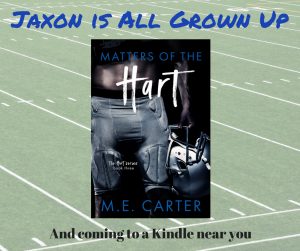