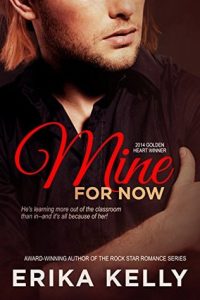 She’s had enough drama in her life.

Nicole O’Donnell is more than ready for the fresh start college offers. After a lifetime of trying to help her alcoholic mom and ex-boyfriend get sober, she’s finally learned her lesson: people don’t change. They certainly don’t change for her.

He can never leave his drama behind.

Thanks to his mom’s substance abuse issues, Dylan McCaffrey’s persona non grata in his hometown of Gun Powder, Colorado. So when he scores a free ride to the top university in the country, he’s determined to make something of this fresh start. But his mom has always relied on him, and she’s not handling his absence well at all. If he can just keep up his grades, pay her bills, and come home every break, he might be able to pull off this opportunity.

No matter how determined they are to steer clear of each other, their combustible connection explodes, especially when Nicole offers Dylan the one thing he can’t bear—hope. Once he has a taste of it—and the irresistible force of her—there’s no going back.

But when he falls too deeply, when he loses sight of his priorities, he might just lose it all.

A romance subgenre I don’t read too often is the Young Adult genre. A lot of these books are set in college, and those days are long gone for me as a 38-year-old. But every now and then I like to read about college-life; with all its struggles, drama’s and misunderstandings. Mine For Now by Erika Kelly is your typical college story, and I like it.

“He let out a breath. He had to let all this shit go. For the first time in his life, he was free.”

Nicole childhood hasn’t been a happy one; her divorced, alcoholic mother chooses the bottle over her own daughter. When her father finally finds out the true extent of his ex-wife’s addiction, he intervenes and Nicole moves in with him and her older brothers. During her teenage years Nicole has had a boyfriend, but he too struggles with alcohol. College is her road out of the past, to start over with the support of her family. Dylan is the handsome boy who comes to her rescue, and it doesn’t take long before she feels more for him then just friendship.

“He smelled delicious—like soap and fresh air and that hint of cinnamon. But it was the look in his eyes—the vulnerability—that did her in. She could see the truth in those watchful eyes.”

Like Nicole, Dylan has a sad history with alcohol. His mother has been an addict for years, leaving him to take care of everything. Buying food, remembering his mother to pay the bills, it’s all on him. But where Nicole has a family who pulled her out of the situation, Dylan’s family is done. They have tried to rescue his mother time and time again, and every time she threw it right back in their faces. And despite his childhood, Dylan came out fine. College is his new start to become more than just his mother’s son. Nicole is everything Dylan thinks he doesn’t deserve, but he can’t stay away from her.

“He wanted to be there for every moment of her life—to fight for her and with her. Fuck. He should not be thinking like that. About things he couldn’t have. He’d always accepted his lot in life. But now—for the first time—he wanted something else.”

Although Nicole and Dylan each of their own reasons for not wanting a relationship, they can’t stay away from each other. Living in the same house and working together a lot they form a friendship, but especially Dylan tries to keep it just that. Of course this doesn’t work, and slowly Nicole and Dylan try to make it work. But wrong spoken words, misunderstandings, people from their pasts and hurt feelings get in their way, a lot. Only after coming clean and letting go of the past, Dylan and Nicole have a change at their HEA.

There where so many moments I wanted to step inside my kindle and smack Dylan against the head. I understand he has his reasons, but he handles some situations so incredible naïve, unintentionally hurting Nicole. But hey, wait a minute.. This book tells the story of a couple of 18-year-olds. When I was 18, I didn’t make the smartest decisions, and for that reason only I can overlook Dylan’s ‘wrong doing’. Mine For Now is your typical college romance, with the usual stereotypes; the best friend, the slutty girl, the ‘can’t be trusted’ ex-girlfriend, etc. This is my first book by this author, I really like her writing style, and that her characters act like real kids.

I’ve enjoyed reading Mine For Now, I give the story of Dylan and Nicole 4 stars. 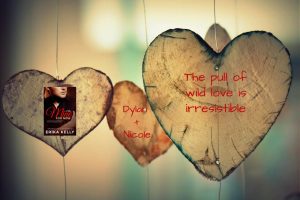 She stepped back from her ex, features turning pink. Her hair shook, her breath came out in white puffs. And then, in the middle of ranting, she looked away. And her gaze caught Dylan’s.

She stilled. Her arms dropped to her sides. Her shoulders relaxed, and then the sweetest smile spread across her face. A slow hum began in Dylan’s chest, spreading out along his limbs until his body vibrated.

Walking towards him, she pressed her fingertips to the glass. He reached up, mimicking her gesture. Happiness danced on his heart.

And then she mouthed, I love you, and the breath left his lungs. The burn raced across his chest, up his neck, and curled around his ears. The soles of his feet tingled.

Her grin broadened, and then she was gone. Breezing past her ex, she swung into the diner, raced to the table and threw herself on top of him. He caught her in the tight space of the booth, her hair spilling all over him. He pushed it aside so he could find that hot, sweet mouth, and then he pulled her tighter to him, his hands sliding under her sweater to find the skin of her back.