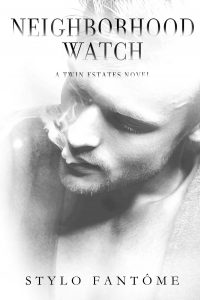 Rules to Join The Neighborhood Watch:
1. If you see something, say something
2. Report all illegal activities to the authorities
3. Do not associate with criminals
4. And certainly don’t fall for them!

Tori Bellows is a really good friend. She’s always there when a shoulder is needed to cry on, to give dating advice, or for a good ol’ time. Now, though, Tori is the one who needs a shoulder to lean on when she’s in a tough spot. But all of her friends are too busy with their own lives.

Enter the Twin Estates’ resident bad boy, Landon Edenhoff. When he offers her an all expenses paid vacation, she’s immediately suspicious – he’s rarely nice and his intentions are never good. But she’s ready for a change of scenery and knows she can give as good as she gets from Mr. Rude & Nasty himself.

After all, how bad could this neighbor really be?

Last year I’ve read Block Party, the story of Liam, one the Edenhoff twins. To my surprise, the guy was more much swoony then I thought he would be… But now we have Neighborhood Watch, the book of the other Edenhoff twin, Landon. And he is a true Stylo Fantôme hero. You want to like the guy, but at the same time you want to strangle him. I love Landon’s love interest Tori, and I have to admit Landon himself grew on me throughout the story.

“We were having a good time,” he said in a soft voice. “Why ruin that?” “Because I don’t like you,” she told him. “So? You were ready to fuck a man who doesn’t like you –what’s the difference?” he replied. Ouch.”

After all the couples of the previous books in the series found their Happily Ever After, Tori is a bit lonely (and feeling ignored). The crush she had on her boss Liam wasn’t mutual, and now she has to watch him happily in love and all. When his twin brother Landon asks her to join him on an all-paid vacation she says yes, wanting some time off and a bit of fun. But how good does she know Landon?

Landon and Liam might like alike, but behavior-wise they are two totally different men. On the outside Landon seems to have everything under control with a responsible job and all, but not everything is what it seems. But under all the secrets and lies there is a decent guy, who wants to have a ‘normal’ life like everybody else.

“I’m trying to fuck you,” he said, shutting the door behind him. She snorted. “No thanks. I’m not in the mood today.” “I’m pretty good at getting people in the mood.” “Have you met you?”

Neighborhood Watch is the fourth book in the ‘Twin Estate Series’ and tells the story of Landon and Tori. Both were side characters in the other books in the series, and l love to finally know more about them. The story is written in Stylo Fantôme’s typical style, and gives an inside in Tori and Landon’s thoughts. I totally get Tori, but personally I have a bigger problem with Landon, I’m not sure about him.

For a major part of the book I have one word for Mr. Landon Edenhoff; douchewaffle… I get it’s a no-strings attached, all fun arrangement, but dude, your plans are so NOT cool. But bad boys can change, and I like the guy he becomes. Tori seems though and all, but under her badass persona she’s a sweetheart who’s longing for something more then just a good time. At first, I didn’t see her ending up with Landon (personally I would have run away as fast as possible), but I understand love can’t be dictated.

“I think we’re in love,” he informed her. “Which means I want to spend every moment I can as close to your heart as I can, with nothing separating us, not even clothing.” “Jesus, Landon, that was really beautiful.” 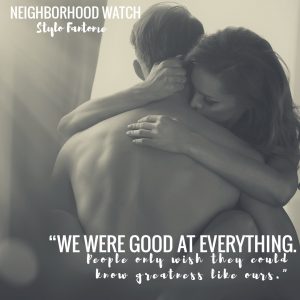