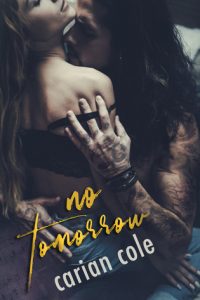 They say you never forget your first time.
Mine was with a homeless musician who effed my brains out under a bridge.

He was my first love. And fourteen years later, I still can’t get him out of my head.

He broke all my rules.
He also broke my heart.

I watched him climb to stardom, cheering him on from afar.
But I was never a fan; just a girl in love.

Like a tornado, he spiraled, leaving a path of destruction in his wake.

But love conquers all, right? It has to. Because here I stand, ravaged and ruined, needing it to be true.

You can’t go back, but I want to. Back to the bridge. Back to when he sang only for me. Before he was famous. Before he shattered my heart.

I thought I knew everything about him.
But I could not have been more wrong.

He promised me every tomorrow. And here I am, waiting.
And hoping.
Again.

Does love have to be easy? Should it fill you with nothing but joy and happy thoughts? Not all love is easy, and that is certainly the case with Piper and her Blue. No Tomorrow tells their story, with all its highs and very deep lows. I love how they keep fighting for each other.

Piper is a sweet young woman, who is figuring out where she belongs. She has a loving family, friends and a job she’s content with; all very normal things. Meeting Blue and slowly falling under his spell is not a normal thing to do. He is her total opposite; not just the way he looks, but his whole way of life is so very different. Other people would have ignored a homeless guy, but Piper sees past his differentness, and starts to fall for the guy.

“He smiles, and we kiss again—another long, deep, and consuming kiss that blurs the lines of where I end and he begins. This… this is everything I’ve been hoping for in a man.”

Falling in love with a homeless guy doesn’t sound ideal, but for Piper it works. It surprises her, but she can’t deny the handsome (and a bit odd) man and his beautiful music. He calls to her on a deeper level and being with him is all she wants. But that doesn’t mean their love comes easy. Blue isn’t homeless for nothing, he’s different and has his own demons to fight. No Tomorrow spans 14 years in the lives of Piper and Blue, and it certainly isn’t an easy walk in the park; tears are shed, and hearts are broken. But in the end, our couple are where they are supposed to be; with each other.

Given the blurb, I expected a certain story, but No Tomorrow took a different route (and I don’t mind at all). The story is told almost solely from Piper’s POV, leaving Blue a bit of a mystery. I had my thoughts about him, but his reality was so much worse. I love Piper for not loosing her faith in Blue, but at the same time I sometimes wanted a different man for her, somebody with far less problems. Personally, I would have walked away a long time ago. With pain in my heart, yes, but sometimes you have to choose yourself. I love the ending that Piper and Blue got, but the scales could have tipped the other way so easily.

“That’s the magic of love. It doesn’t always have to be easy or perfect or normal. It can just be two people who believe in each other enough to be there for all the tomorrows.” 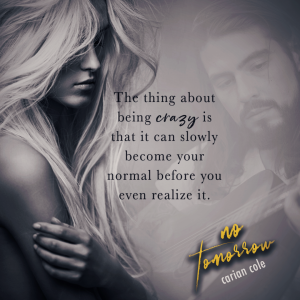