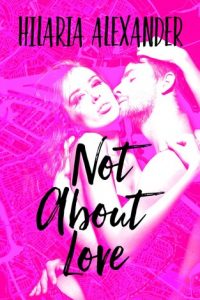 Strong and independent,
Wrong for each other in every way.
But the heat, the passion, the pull.
Undeniable.
Irresistible.
When we were together,
The chaos turned to desire,
Need.
Bliss.
I was his.
He was mine.
For the time-being.
Different countries.
Different worlds.
Just sex.
No strings attached.
That's how Boyd Rivers wanted it.
And exactly how I liked it.

But sometimes, fate has other plans...
Can it really be not about love?

Not About Love is the second book in the "This Love" series, but can be read as a standalone.

Last year I discovered a for me new author, Hilaria Alexander. After having read her book FU Cancer, I immediately read her other books. I loved them, especially This Love, which was set in Amsterdam, not far from where I live. Not About Love tells the story of Ally and Boyd, who are introduced as side-characters in This Love. This is their story.

“We didn’t really know each other. Our relationship was not about love. It was about chemistry and attraction.”

Ally is living and working as an attorney in the busy city of Amsterdam. She enjoys her life, her work at her own little law firm and spending time with her friends. Ally isn’t a relationship-person; after her fiancé broke her heart she has made the decision to keep her ‘relations’ with men casual. When her friend Ella falls in love with Lou, Ally is introduced to his brother Boyd, and her need for casual slowly begins to fade.

“I broke the kiss and as I opened my eyes, I met his, wild and full of lust. His breathing was heavy, his pupils dilated. I could tell he was going to kiss me again. And I wanted to. But it seemed like an awful, awful idea. His brother was a friend of mine. I didn’t want to complicate things.”

Boyd is a busy man in his mid-thirties with his own, successful gym in New York. In his early twenties he had a serious relationship, but after he got played he has decided not to get hurt again. Therefor he doesn’t do relationships, but chooses to hook up with twenty-something year old’s, just fun and no expectations. Meeting Ally and getting to know her awakens all sorts of unknown feelings, feelings he rather ignores.

“Ally,” I said in a low growl. She turned around, seemingly startled, her eyes wide. They looked even more beautiful in the daylight. A gorgeous shade of blue. The way I remembered them did her no justice. She was beautiful, confident. So damn sexy.”

The moment Ally and Boyd meet, there’s an instant attraction between them. Since they both don’t believe in love and a serious relation, they decide to hook up, just for fun and to give into the sexual need for each other. But since this being a romance book, you can guess this arrangement isn’t working like planned. Both start to have feelings for one another, something they didn’t plan on. Ally and Boyd are both grown-ups with a past, both are successful people in their own field. They have a great chemistry and just belong together. They just have to stop being stubborn and let the past dictate their beliefs.

I adore Not About Love. I love the authors writing style and the way she writes her characters. Ally and Boyd feel like real people, with real beliefs, doubts and actions. Although there is some angst, this isn’t an over-the-top story with crazy twists and turns. It’s just about two people coming to terms with the love they have for each other and working towards a future. I just wish Boyd had pulled his head out of his ass a bit sooner, so that I could have read a bit more about him and Ally as a real couple. I don’t doubt his love for her, but I wanted a little more.

“Ally.” “Yes?” “I’m just a boy, standing in front of a girl, asking her to love him,” he said, quoting the movie. I looked into his eyes, and I realized just then how head over heels in love with him I was.”

I love Not About Love, but due to Boyd’s stubbornness I give this story 4.5 stars.

~~ Not About Love was provided in exchange for an honest review ~~ 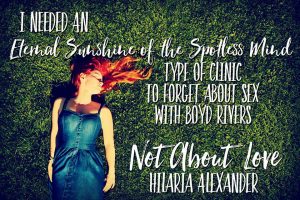