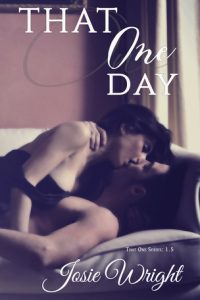 So I leave, searching for the truth hidden behind a web of lies.

The only thing I take with me, besides a bag of clothes, is the memory of one night. That one night with Frankie, my best friend’s little sister. The woman I have loved as long as I can remember.

The memory is what keeps me going when I learn the truth. It’s what keeps me sane when I feel like I’m losing my mind. And, it's what drives me back to a life I ran from eighteen months ago.

Yet, nothing is the way it used to be. Frankie has a secret. One that changes everything. Changes who I am. Letting her go is not an option. I have to make her trust me. I need to make her mine.

But I have a secret of my own. One that keeps me awake at night. A secret that could make me lose Frankie forever. It’s not a chance I can take.

Not suitable for under 18's due to strong language, violence and sexual content.

*Though this book can be read as a standalone, it's recommended to read 'That One Night' first to get the full picture.

A couple of months ago I’ve read That One Night, the debut book by Josie Wright. It told the story of Frankie and Ben, from Frankie’s point of view. And although I had a few issues with the book, I really liked it. That One Day tells Ben’s side of the story.

Ben is your normal guy. He likes to hang out with his best friend Dave and has a secret crush on Dave’s younger sister Frankie. His studies aren’t going to well, even after three years in college he still isn’t sure what he wants for his future. A letter from a law firm changes everything. Finding out his dad isn’t his biological father shocks him to his core, all he can think about is to get as far away from his parents as possible. When he returns eighteen months later to visit Dave, he finds out the one night with Frankie wasn’t without consequences.

“There’s so much I want to tell her, so much I want to say, but instead I lean down, my mouth at her ear and I only say one thing, “Sorry.” I didn’t think it was possible, but she goes even more rigid in my arms. Well, that was the wrong thing to say.”

Finding out he has a son – Archer – with Frankie is a big shock for Ben. But after some quick thinking Ben decides to help Frankie out however he can. Not just because they have a baby together, but she’s Frankie, the girl he has secretly loved for a long time. Although still angry for his leaving, Frankie does accept Ben’s help, and slowly they rekindle their friendship, and explore the still present feelings. But while Frankie is an open book, Ben keeps hiding things, keeps being secretive about his biological father. When all is out in the open, the couple finally has a chance to a happy family life.

That One Day tells Ben’s side of the story, tells about that night, and what happened afterwards. And while I felt sorry for him about the way he found out about his biological father, he didn’t handle it very well. In fact, he didn’t handle it at all; he just walked away from his parents and his best friends, just left them without looking back. I also didn’t like the fact that Ben kept his real father hidden for Frankie for so long, while his inner voice tells him on numerous occasions something is off. And Ben, please stay away from Google..

“This woman right here in front of me has me wrapped around her little finger without even knowing it. She’s selfless and loving, but doesn’t put up with anyone’s shit. I know she’d do anything for Archer and me, but she isn’t afraid to put both of us in our place. She loves unconditionally—making up for all the shit coming our way with a single smile. This is it. She is it.”

Although I have some problems with That One Day, I’ve enjoyed reading it. I like Josie Wright’s author voice, and the characters she writes. I give the story of Ben and Frankie 4 stars.

~~ That One Day was provided in exchange for an honest review ~~ 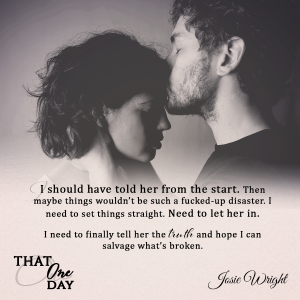 Tags Josie Wright, Romance, Secret Baby, That One, That One Day