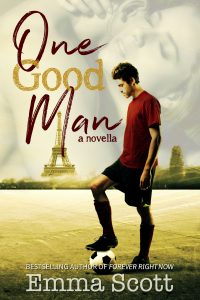 It’s spring, 1970. The Vietnam War has been raging for years with no end in sight. Janey Martin, a California college student and aspiring journalist is tired of writing puff pieces about her university men’s sports teams. She wants to be taken seriously as a journalist and as a woman. With riots at their doorstep, her wealthy father sends Janey to the Sorbonne in Paris to finish her college education away from the chaos.

Janey is reluctant to leave the Big Story that is Vietnam, but vows to prove herself. Much to her dismay, her first assignment is to interview the hotshot star forward of a local soccer team. Janey is sure Adrien Rousseau is going to be like every other playboy jock she’s ever dealt with, but quickly learns there is much more to Adrien than meets the eye.

The mysterious, sexy footballer just might be the biggest story of Janey’s life.

How far would you go for your dreams? Will you do everything or would give up on them for the greater good (whatever that might be). One Good Man is short novella and tells the story of Janey and Adrien, who each have dreams they can’t have. But do you have to give up on those dreams?

“But your concern for me…It’s nice.” My throat went dry. A voice in my mind wondered if it had been a long time since anyone had taken care of him.”

Janey is an aspiring journalist and photographer, wanting to make a difference in the world. No fluffy fuffy sweet boring articles, but stories that will make people see reality. But said reality catches up with her and Janey is ‘shipped off’ to Paris France, to finish her education. Much to her annoyance she has to write an article about a local soccer player / medical student, something boring. Not her choice at all, but it turns out there’s so much more to Adrien.

Adrien is a gifted young man. He’s a good soccer player, but becoming a doctor is what he really wants. Sadly, you can’t always do want you want, and taking care of his family is more important to Adrien then his own dreams. That’s until he meets Janey, who teaches him he can have both (with a bit of luck and help).

“You look as if you want me to kiss you.” “I don’t…” He leaned closer. “I want to kiss you. I’ve wanted to kiss you since the moment we met.”

If One Good Man sounds familiar, you are right. The story is a part of The Team Player anthology, but it’s now a standalone novella, with some extra content. Normally I’m not a big fan of novella’s (it’s too short for character/story development), but One Good Man is a very pleasant surprise. It feels like a full-length book, with real-life characters in a realistic setting.

Janey and Adrien are a swoony couple, for some reason they just belong together. I love Janey and her attitude towards soccer (I have to admit, I’m no fan myself, sorry guys). But what I like more about her is her view of the world. She could have been a spoiled rich girl being ignorant and all, but instead she sees what’s going on in the world and wants to make a difference. Adrien is just an amazing young man who’s trying to do the right thing, even if it makes him unhappy. I love the two of them together. 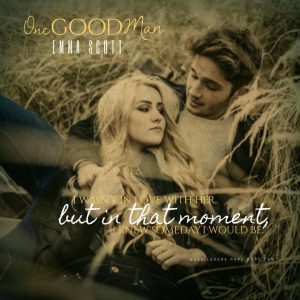 I reached over and pushed ‘stop’ on Janey’s tape recorder and turned to her. “Saturday then?”

She coughed in surprise.  “What happens Saturday?”

“We conclude the interview. You need to see a football match firsthand or your article is going to sound like a bunch of amateurish gibberish. You want to be taken seriously?”

She pressed her lips together for a moment. “Yes.”

“So do I. Saturday at noon at Stade Jean-Marc. We’ll finish the interview after.”

“Antoine wants the article in two days,” she said.

“Tell Antoine I said to wait.”

She took another long pull from the lemonade, her pride not letting her say yes to me so quickly.

“Saturday then,” she said. “For the article.”

She finished off the lemonade and set the glass down. “Thank you very much, Sophie. It was just what I needed.” She gathered her belongings and turned to me. “See you.”

“You have a drop of lemonade on your chin,” I said.

I held out the cocktail napkin with my sketch of her, my brow raised.

Janey dropped her hand from her dry chin, fuming. I expected her to flounce away. But she snatched the napkin out of my hand, dropped it into her bag, and coolly walked away.

I wasn’t in love with her, but in that moment, I knew someday I would be.