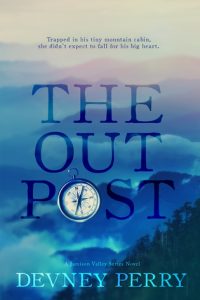 Trapped in his tiny mountain cabin, she didn't expect to fall for his big heart.

Exposing a prominent criminal family with an investigative news report didn’t exactly work out the way Sabrina had hoped. Instead of basking in the glory of her article’s success, she’s on the run from a powerful man who wants her dead. To stay safe, she’s forced to trade one bad situation for another. Stuck in the Montana wilderness, she’s secluded from anything resembling civilization or the modern-day world. The only good thing about her situation is the gorgeous mountain man assigned to protect her. Too bad he isn’t the slightest bit interested in a city girl like her.

Beau likes his life quiet and simple. Give him a peaceful day hiking in the woods with his dog, and he’s a happy man. He has no use for large crowds, noisy cities or dramatic women. So when a hotshot reporter rolls into town, dragging her big-time problems with her, he should have run for the hills. Instead, he volunteered to keep her safe. Bringing her into his world won’t be easy, but if he can convince her that Montana isn’t as terrifying as she believes, they might just be the perfect match.

The city and the mountains… Do they mix? The Outpost tells the story of Sabrina – city girl through and through – and Beau, a true mountain man. After the previous book in the series, The Lucky Heart, I was curious about Sabrina and her story, and The Outpost surely didn’t disappoint!

“A woman could tell a lot by the way a man holds her. She could tell if he had the strength to endure the rougher moments. If he had a mighty yet kind heart. If he could make her feel safe and cherished. Beau’s embrace said all that and more.”

Sabrina is a passionate journalist who wants to be the best; write the top stories and uncover the ugly truths. But her latest story about a ruthless criminal family has proved to be too much, she has to leave her city to save her life. The only safe place Sabrina can think of is the small town where her beloved friend Felicity lives, and that’s where she goes. Sabrina is dealing with the aftermath of her ordeal, the last thing in her mind are men, or a specific man to be precise.

Beau is a man of the mountains, it is his life and his job. He keeps a scared and battered woman safe without asking questions, but falling for a city girl is a step too far. Beau and Sabrina are the opposite of each other, but both cannot deny the chemistry between them.

“Sabrina MacKenzie was completely under my skin. Every time I drove away from her at the outpost, I fought the urge to turn back. I wanted her. Every piece.”

The Outpost is already the fourth book in the ‘Jamison Valley Series’ and takes the reader back to the small town of Prescott. The couples from the previous books make their appearances of course, but this is the story of Sabrina and Beau. The title and the blurb tell a lot about the book; the couple spends a bigger part of the book away from civilization, and especially Sabrina learns a lot about herself and what she wants to change about her life. The Outpost is a bit more angst-y then the other books in the series, but I don’t mind.

I have to be honest. After The Lucky Heart I wasn’t too sure about Sabrina. Who in her right mind puts herself in so much danger for an article in a newspaper, worrying her loved ones? But now I have to say I kind of get her, not that I will ever do it, but I get where she comes from. Beau and Sabrina are instantly attracted to each other, and I’m surprised they hold it of for as long as they did. I love the two of them, Sabrina is a fiercely independent woman (who secretly wants a lot more then she asks for) and Beau is a great man; protective and very Alpha (but in a good way).

I love Sabrina and Beau, I give The Outpost 4 stars. 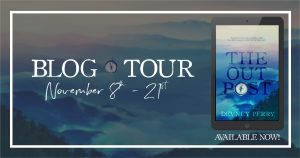