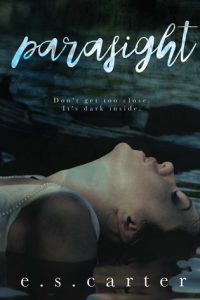 I am drowning in darkness.
My limbs submerged in inky tar, my lungs asphyxiated by the stench of death's hold.
My eyes see nothing but black.
Yet I see him.
And I am not scared.
I should be.


Don't look into my eyes, for my demons will eat you alive.
My devil inside will feast on your soft flesh. His jagged teeth will tear the meat from your bones and drink the light from your soul.
His scars will turn the innocent into sinful and drag you into his dark pit of hell.
No light lives within this disfigured shell.
I am a vessel for pain.
Giving and receiving.
It feeds me.
It nourishes me.
It holds me close like the arms of a lover and whispers to me in the twilight.

They say the devil was once an angel.
There is no angel inside me.
I do not seek repentance nor forgiveness.
I do not crave things as weak as love.
My desire for her is purely selfish and once my appetite is sated she will be unlucky to leave with her life.
When she looks into my eyes, my demons will eat her alive.

Parasight is the second book in E.S. Carter’s ‘the Red Order Series’. Like the first book it’s nothing like the author’s sweet other books, it’s brutal and horrific. In the previous book we’ve met Grim, a terrifying guy with a hunger for killing, preferably the sick people preying on the innocent. Parasight gives us his story.

“I’m strong enough for your hurt, Grim. If you need it, give it to me. Give it all to me.”

Grim’s last memories of his parents are brutal, and shaped him into the nightmare he is today. As the Reaper of the Red Order he extortions information and delivers punishments to the scum of the earth. And as you can guess from his name, most of Grim’s victims don’t come out alive. With his brain so differently wired from other people, it’s almost impossible for Grim to form relationships with other people. He basically only trusts his friends Cole and Luke, and to some extend Faye. When Grim is on the hunt for an old enemy he meets Calliah. He doesn’t want to want her, but he can’t stay away from her.

“This girl is ethereally beautiful, but it’s when she opens her eyes that my head spins and I stumble back, almost falling flat on my arse like a spooked child. Those eyes haunt me. Iridescent blue, and almost lifeless, they look like the eyes of the dead yet have a depth that speaks of untold vitality.”

Calliah only knows pain and darkness. All she remembers from her childhood are her older sister and the horrible things done to them. She has hold on to life for as long as she could, but now she’s ready to give up, to escape from her nightmare and the monster that owns her. Being rescued by Grim gives her a change at some sort of life, but strangely she feels something for the man. Gratitude, friendship, something more? She isn’t sure, but she wants to be in his presence.

“I feel his eyes on me the entire way, and I want to turn and go back to him, for no reason other than I felt something in his company; something more than the eternal loneliness and isolation that I’ve felt for most of my life.”

Grim and Calliah are both very damaged people, physically and mentally. What they went through has altered them in so many ways, but somehow they find peace in each other. Grim has rescued Calliah from a horrific situation, saw her at her very worst. But he sees past that, and sees the beautiful sweet woman she is. Despite all the monsters from her past, Calliah is still here, and being with Grim makes her feel safe. Oddly enough this couple makes sense; they are right for each other and you just want them to be loved in their own way.

Like Feyness, Parasight is a romantic story against a very dark background. Horrible things are done to Grim and Calliah, and Grim and his favorite weapon do them to other ‘people’. Reading about it is hard, but the way the author has written it makes it a little less scary. Most of the horrible situations have happened in the past, and are told about. This creates a bit of a distance between the reader and the awful situations. It’s doesn’t make them less terrible, but a bit easier to read. I love Grim and Calliah, and I really like their whole storyline. I can’t wait for Luke’s book. Something tells me the sharply dressed man is the scariest guy of the three men…

“Is it over?” I ask as my senses begin to dull just before sleep claims me once more. “Yes, it’s over,” he whispers into the hair at my crown before inhaling deeply. “But you and me, Cal, we’ve only just begun.”

I’ve enjoyed reading Parasight, I give the story of Calliah and Grim 4 stars. 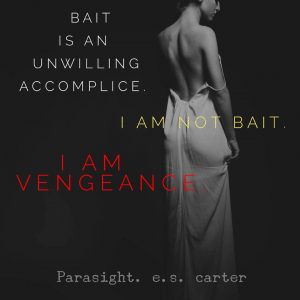