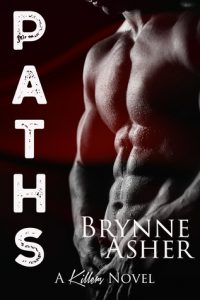 Maya Augustine needed to disappear—her life depended on it. When her path led her to the middle-of-nowhere Virginia, she found the perfect place to hide. A woman on the run, Maya had no business befriending anyone, let alone allowing herself to become involved with a man … especially after her last experience. Even so, she couldn’t help but become obsessed with the bruised, battered, and beautiful killer who walked into her life.

Grady Cain reached rock bottom. His past finally caught up with him, causing him to lose his edge at work and in life. Spiraling down a desperate path of remorse and guilt, Grady wasn’t expecting his refuge to come in the form of a woman. Day in—day out, she was the only thing he’d allowed himself to think about. To focus on. To consume him.

One was running. The other had nothing to run to.

Until these troubled souls crossed paths…

And two paths became one.

~~~~~~~~
Warning: This author is a mom who runs a PG-13 home. This book is not PG-13. She would literally keel over and die if anyone under the age of 18 read this book. If you’re not of age, save an author from an untimely death, and go read Harry Potter. He’s awesome.

Paths is Brynne Asher’s newest story and the second book in her ‘Killers Series’. Like the previous book Vines, Paths has a lighter tone then her Carpino books, but that doesn’t mean our Hero and Heroine won’t have to work for their Happily Ever After. I’ve enjoyed the story of Maya and Grady.

“There’s pain hidden there, because I recognize it. I’ve seen it in the mirror for a while. Only recently have I noticed it fading in my own eyes—but still, it’s there.”

When Maya finally has enough, of her life and especially certain people in it, she leaves to keep herself safe. Not getting attached to people and places is her mantra, but resisting the small ‘in-the-middle-of-nowhere’, Virginia is hard. The people are friendly and welcoming, and Maya decides to stay around for a while. She can even put her study a bit to use at a nearby home for the elderly, and works part time at Addy’s vineyard (Addy is the leading lady of Vines). But although she likes her life now, Maya is sure she can’t be in a relationship, knowing her past is still looking for her. Handsome, grumpy Grady makes her want to forget the past and to start hoping for a future…

“Shit. I’ve never been alone with him. When I turn around, there he is, looking at me with his perfectly-beautiful, anguished blue eyes. I swallow and do the one thing my mother instilled in me more than anything else—be composed.”

Grady has every reason to be ‘grumpy’. He’s dealing with the painful aftermath of an assignment gone wrong. Combined with the demons of his past he’s not in a good place, at all. He tries to keep everybody away, but his friends won’t let him. Addy’s new employee Maya is a pretty woman, and although she annoys him with her healthy food and well-meant advice, she gets under his skin. Fast. When Maya’s past catches up with her, Grady knows he has to protect her, and keep her safe.

“I should be really fucking worried about my mental capacity that I’m watching her and don’t care. But I adjust the cameras and do what I do every day. I watch so I don’t think about anything else. Nothing but her.”

Maya and Grady don’t really like each other. Maya believes Grady is a cranky guy and Grady doesn’t like Maya sticks her nose into his personal life. Well, she knows what she’s talking about and her words make sense, but Grady doesn’t like it. At all. But spending time together starts to change the two of them. Soon they can’t fight the attraction between them and they hit it off… Grady senses Maya is not like the women he normally goes for, and he tries to hold back and take his time. I love them together!

As I already said, Paths has a light tone (hello my dear cows and other things), but what Grady and Maya went through in the past isn’t light at all. Grady comes from an abusive household where he was ‘responsible’ for his younger sisters, Maya has everything she wanted except a loving bond with her parents. Like other Heroes by this author, Grady is a bit of an Alpha guy who wants to protect the women in his life, but isn’t very good with words. His actions though speak for themselves. One minor detail about Paths; I didn’t like the POV from a certain villain. He sounded like a bad guy, but his own POV turned him into a spoiled brat who didn’t get his favorite toy. I prefer the bad guys to be really bad guys…