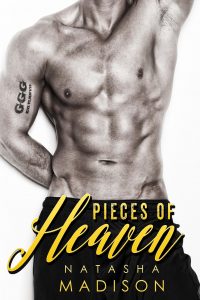 Marissa
I didn’t want this life.

But sometimes you’re forced to make the best of the crappy hand you’ve been dealt. I wanted to teach my daughter that. No matter what happens you face your problems head-on.

Never cower. Never give up.

Then someone took her and I had to put my faith in a system that had failed me, and my hope in a man I didn’t know.

Mick
Serve. Honor. Protect, are the only things I’ve ever cared about until her case was dropped on my desk. As we searched for her missing daughter, the last woman I thought I’d fall in love with became my reason for living.

Then the world came crashing down around us.

One secret would change everything, but I had one more hand to be dealt. And if I played my cards right, maybe, just maybe we’d get our piece of heaven.

Pieces of Heaven is the second book in the ‘Heaven & Hell Series’ by Natasha Madison. It tells the story of Marissa and Mick, two characters we’ve met in the previous book of the series, Hell and Back. I love the author’s debut book Something So Right, but for some reason this series and I don’t have a click. I wish it was different because I love stories about Alpha men and their sassy ladies.

“Had heaven in my hands and I let it go. Fucked it up. Now I’m living in hell.”

Marissa is a 32-year-old mom who doesn’t have an easy life. Her parents kicked her out when she got pregnant at 16, so she started living with her good-for-nothing boyfriend. When the boyfriend leaves her with his huge debt, Marissa has no other choice but to start working at a strip club to pay off the money. Unfortunately, her daughter Lori hangs out with the wrong crowd and disappears. When Marissa calls in her missing girl, police officer Mick shows up to see what’s going on and what the police can do. Soon, he becomes very important to her.

“I’m dreaming, or at least I think it’s a dream. I don’t open my eyes yet. I just bask in the heat of my cocoon. I’m wrapped up in his arms, my cheek resting on his chest. His heart beats a lullaby, prolonging my rest.”

Mick didn’t have the easiest childhood. His parents had a ‘hidden’ relationship and when his father breaks it off, his mother spirals out of control into drugs and stripping. Being good at football earns Mick a scholarship, giving him the chance at a better future. For a long time, Mick is in a messy relationship, but finally he’s done with his girlfriend who promises him everything, but does the opposite. Right at that time he meets Marissa, a distressed mom who gets under his skin very fast.

“I know I shouldn’t be doing this, shouldn’t even be thinking about this, that this is going to end fucking badly for everyone. But I just don’t care right now, not one fucking bit. My heart beats just a tiny bit faster because of her, and I don’t think it’s done that for anyone.”

The first meeting of Marissa and Mick doesn’t go very well. Because of his past with his mother, Mick makes some assumptions about Marissa and speaks them out loud. But the more time they spend together, Mick sees Marissa is nothing like his mother; she’s a sweet and honest woman who didn’t have much luck in life. Mick falls for Marissa fast and hard, Marissa is a bit more realistic, but she too can’t help falling for Mick. Between the search for Lori and the aftermath of her ordeal and an evil ex-girlfriend, they have plenty time for hot and sexy encounters, Mick is quite the dirty talker…

Unfortunately, a book is more than just its characters and their interactions. It’s about the actions, reactions and the situations the author places her characters in. While I like Mick, Marissa and their whirlwind, over-the-top, sexy courtship, some of the situations and descriptions felt too much for me. I wondered if the author wrote them in for shock, or to explain how awful a scene was. For me, it didn’t add to the storyline. Mick is a nice guy with a sad past, but I can’t understand why he lets his ex-girlfriend string him along for as long as she did. I’m glad he found Marissa, who showed him what real love looks like.

“Does it ever get bad?” she says later that night after we locked up and made sure the kids were okay. I climb in after her, grabbing her in my arms and kissing her neck, smelling the strawberry soap she has on her. “Nope, not when you’re touching pieces of heaven.”

I like Marissa and Mick, but because of my issues I give Pieces of Heaven 3 stars. 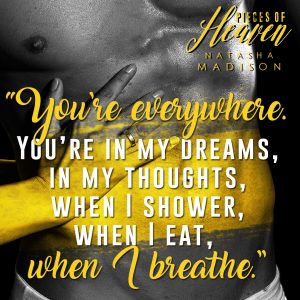