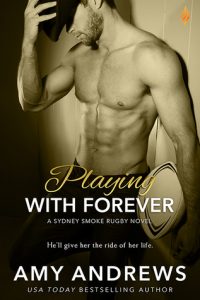 Country boy, Ryder Davis has the world at his feet. A stellar rugby career, a winning way with women and a beach view that keeps him in blue sky and bikini babes. He’s living the dream. The last thing he needs is a Great Dane called Tiny destroying his feng shui.

Dog whisperer, Juliet Morgan is about to start living her dream and she’s counting down the days. In two months she’ll finally be moving to Italy and no man’s going to stop her this time. Not even a rugby superstar with a badly behaved pooch.

But when Ryder skids into the animal shelter looking for help Juliet agrees to assist him with his canine issues. Pretty soon they’re assisting each other out of their clothes and tumbling headlong into a sex thing with an expiry date.

Neither of them expected it to become more. But when for now starts to feel like forever Juliet hits the panic button. Ryder knows he has to play the long game and let her walk away. After all it’s not over until the final hooter sounds and all’s fair in love and rugby.

How do I pick my next read? An important criterion is the author (that’s a no-brainer), but also the blurb plays a major part, especially with new-for-me authors. Playing with Forever is my first book by Amy Andrews, and the blurb made me curious. A rugby player and a Great Dane called Tiny meet Juliet, Dog Whisperer extraordinaire; what can happen?

“You are adorable, aren’t you?” Tiny licked, actually licked, her cleavage,then shot a shiteating grin in Ryder’s direction. If the dog had eyebrows, one of them would be arrogantly cocked. Ryder blinked. The damn animal had more game than him.”

Ryder is your typical famous rugby player; good at what he does, handsome and popular with the ladies. Lately he’s a bit done with the easy women who want him just for his rugby shirt and don’t look further. When Ryder gets an unsuspected houseguest in the form of Tiny because he can’t say no, he meets Juliet, who can help him to tame ‘the beast’. Juliet has been hurt pretty badly, so she wants to follow her own dreams. Ryder and Juliet aren’t looking for ‘The One’, but they can’t help falling for each other.

“He was here. He’d come. Ryder Davis had been on her mind ever since he’d skidded into the shelter yesterday afternoon, looking for a doggy exorcist and she’d made a pact with herself this morning. If Ryder showed tonight, it was her sign from the universe. And here he was.”

Playing with Forever is the fourth book in the ‘Sydney Smoke Rugby Series’, but I didn’t get the feeling I was missing information from the previous books. The story is told in a double POV, giving both Juliet and Ryder a voice. Given the fact the author is Australian, she sometimes uses other words or phrases then I’m used to, but I don’t mind at all. I like the writing, it’s fast-paced and easy to read.

It took me a wee bit to get used to the writing, but once I was in, I was hooked. Juliet and Ryder are clearly attracted to each other from the moment they meet, I love them together. It starts as just sexy times, but of course the heart has to get involved. I love to see the guy is all in (to his surprise), and that it’s the girl who’s fighting the situation for once. I want my own Tiny! I love that crazy, big, clumsy animal. Juliet and Ryder are great characters, but that dog steals the show with his moves.

“Yes. I love you. So much.” Juliet took three steps to the latch that lifted the segment of counter and was through the other side and in his arms in a flash. “I love you,” she whispered. “I love you, too,” he whispered back.”

I’ve enjoyed reading Playing with Forever, I give the story 4 stars.